A performance lecture on Tuesday, 7 April 2020, from 10am to 12noon, in Porthania P545 (Faculty Room). Organised with generous support from the Doctoral Programme in Law.

Please note that this event is cancelled.

//sensoring (for what to use if not my ears and eyes, he said from that white coast across the channel) //sensing (for what to trust if not the ones that I have never encountered) //matter (that white noise – who amongst the orders of angels will hear my) //materiality (encased as she was by the unfinished) //hypothesis (but he knew, I am sure he knew, right from the outset) //play (it’ll be all right on the day) //flow (yes) //flow (no) //and destroy

The event is open to all interested, but kindly register your intention to participate by Friday, 3 April 2020, by filling in this form. 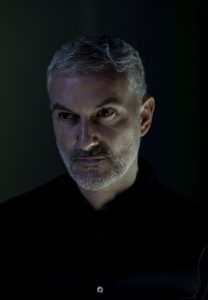 Andreas Philippopoulos-Mihalopoulos is Professor of Law & Theory at the University of Westminster, and founder and Director of The Westminster Law & Theory Lab, as well as permanently affiliated to the University Institute of Architecture, Venice since 2009. His research interests are interdisciplinary and include space, bodies, radical ontologies, post-humanist studies, critical autopoiesis, literature, psychoanalysis, continental philosophy, gender studies, art theory, and their connection to the law. His academic books include the monographs Absent Environments (2007), Niklas Luhmann: Law, Justice, Society (2009), and Spatial Justice: Body Lawscape Atmosphere (2014). He is currently working on a monograph on Material Justice.

Andreas is also an artist working with performance, photography, text, and installation as well as sculpture and painting. He has performed at the opening of the 58th Venice Art Biennale 2019, the 16th Venice Architecture Biennale 2016, the Tate Modern, Inhotim Instituto de Arte Contemporânea Brazil, the Danish Royal Cast Collection, the Royal Music Academy of Sweden, and other institutions. He has shown his photography and text (picpoet on instagram) in group shows at the London College of Communication, The Arebyte Gallery, the Palais de Tokyo publication On Air as part of the Tomas Saraceno Carte Blanche show, Unit 24 Gallery, and in his solo show The Iron Books: Poems for the Posthuman at Gasoline Rooms London. He is currently working on an installation on the Lawscape for the Venice Architecture Biennale 2020 with the Danielle Arnaud Gallery. His recent art publication is called a fjord eating its way into my arm, published by AND publishers, London.

He is also a fiction author, with his book The Book of Water published initially in Greek and translated to be published in English by ERIS press in June 2020.