Speech reports in Macedonian are marked most frequently by two verbs that both translate as ‘say’ in English. As Izabela showed in her presentation, one of the verbs is on the path of grammaticalization into a quotative marker, depending on the dialectal variation of Macedonian and the register speakers use. Furthermore, Izabela presented cases from her data, where a discourse report is embedded in a discourse reported event.

Speech reports in Chácobo, are usually marked by verbs of speech where ‘say’ occurs most frequently, or the cognitive verb that is equivalent to ‘think’ in English. The language also has a reportative evidential marker that is obligatory, but not integrated into the inflectional system. Adam points out that the reportative evidential is rarely left out. The majority of cases where it is left out is when a Chácobo speaker is telling a joke.

Both presentations have shown that some of the frequent strategies of speech reporting in the respective languages are on the path of grammaticalization into quotative markers.

The twelveth session of our reported speech workshop travelled through various parts of Africa, with Guillaume Guitang discussing the Chadic language Gizey and Alexandra Vydrina discussing the Mande language Kakabe.

Both presentations gave detailed accounts of reported speech marking in the respective languages, including extended functions and variation in the form of matrix units -and managed to introduce some new surprises.

Guillaume Guitang showed that the quotative marker in Gizey consists of various morphological components that are synchronically only partially transparent, but can be analysed as a combination of dedicated quotative elements and other markers, including a modal element. He also shared the rather spectacular find of an ‘anti-logophoric’ marker in Gizey, which, unlike regular logophoric pronouns, appears to be used to indicate non-coreferentiality between matrix subjects and those in report clauses.

Alexandra Vydrina shed an interesting new light on indirect speech, by demonstrating that in Kakabe indirect pronominal reference is in fact much more common in conversation than in, e.g., narrative genres, with direct speech being most common in genres that the current speaker has no involvement in at all. This appears to contradict the common assumption that indirect speech is a more literary and written device, whereas spontaneous spoken language typically favours direct speech.

Please join us again for a new and varied session on 8 April!

The eleventh session of our reported speech workshop returned to our regular format of data sessions with two presentations that again demonstrated the breadth and impact of the phenomenon of reported speech.

Within the context of a broader study on Hindi-English code-switching, Aung Si discussed corpus examples of code-switching in reported speech constructions. In addition to introducing data from yet another language area (and language families) into the workshop, his analysis also showed that the locus of switches between English and Hindi could violate about any syntactic prediction proposed in the literature. This raised interesting questions about the structural representation of reported speech and, especially, led to discussion about the (in)sufficiency of reducing, e.g., indirect speech constructions to ‘regular’ examples of complementation clauses.

Timur Maisak brought us to an area that we have visited more frequently in the workshop, presenting data from the Caucasian language Andi, but made it very clear that languages in this geographical region show some of the most surprising and exciting features to study semantic and structural properties of reported speech. His talk addressed the marking status of quotative markers in combination with matrix elements, various semantic extensions of reported speech and finished with interesting observations about the indexical properties in Andi reported speech (unlike in many other Caucasian languages not related to pronominal clitics, but to the behaviour of demonstatives).

Please join us for two new data sessions on the 25th!

A slightly atypical edition of the reported speech workshop this week: we discussed some of the themes that have come up during the past nine sessions and considered some topics that we would still like to discuss in upcoming meetings.

The diagram below, collaboratively produced using a whiteboard webservice called ‘Flinga’, visualises some of the workshop topics and their connections (for a higher-resolution version, please contact us; thanks to Denys Teptiuk for providing the screenshot!): 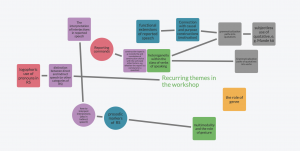 Next time we will return to our regular data session format, so please join us again then.

Our third reported speech workshop in 2021 provided yet another set of perspectives on the topic: geographically, with a discussion of Nisvai, the first Oceanic language in the series and thematically, with discussions of a social media corpus of Ivorian French and the acoustic properties of direct speech.

Lacina Silué shared his fascinating data on Ivorian French, showing that the French complementiser que appears to have been co-opted into a quotative function under the influence of the Djula quotative marker ko. This quotative also has been directly borrowed into Ivorian French with a pejorative reporting meaning. The similar-but-different types of logophoric markers in the language led to interesting comparative discussions with the other Africanists in the workshop.

Jocelyn Aznar presented his annotated corpus of Nisvai narratives, demonstrating interactions in the length and position of pauses, ‘silent gaps’, relative to the reported clause and interjections occurring at its boundaries. Other participants in the workshop shared comparative observations about the role and impact of structural marking of interjections, prosodic and multi-modal features or reported speech and methodological suggestions were exchanged.

The regular programme of the workshop returns on the 11th of March, but next time we will take stock: looking back at the issues that have been raised over the past nine sessions, identifying open questions and research angles and exploring possibilities for collaboration on sub-projects and publications. Please join us!

Susie Locklin shared detailed examples of pronominal patterns in Jula narratives, demonstrating that logophoric pronouns are used in some grammatical contexts but not in others. This led to interesting observations about glossing and the interpretation and translation of types of reported speech that cannot be readily translated as standard ‘direct speech’, but also do not qualify as ‘indirect speech’ under any common interpretation.

We would like to thank all participants who contributed to the reported speech workshop this year, it has been a great pleasure. We are looking forward to seeing everyone again for our continuation after the winter break on the 14th of January

Felix Anker and Denys Teptiuk presented a lively fifth session of our workshop, discussing data from the Nakh-Daghestanian language Tsova-Tush and a whirlwind tour of Finno-Ugric languages, respectively.

Questions about how to delineate marking and meaning in reported speech arose throughout the meeting.

Felix Anker’s data session showed the interaction between a quotative marker in Tsova-Tush and speech verbs, raising questions about the demarcation of construction types and the evaluation of optional elements in reported speech. Videos illustrating the use of reported speech in natural discourse led to stimulating discussions about the role of multimodal elements in the expression of speech reports.

Denys Teptiuk highlighted two extended meanings in Finno-Ugric reported speech: the functions of ‘reason’ and ‘purpose’. His comparative perspective allowed for interesting questions about the degree to which these meanings arise through inference or are specifically marked in the various languages –and the cross-linguistic variation between them in this respect.

Please join us for our final workshop session in 2020 on the 10th of December!

Our fourth meeting in the workshop series brought another very rich couple of data sessions, thanks to Tatiana Nikitina and Rebecca Paterson.

Tatiana Nikitina discussed the Mande language Wan, which sparkles with interesting reported speech phenomena, including logophoricity, a very clear distinction between quotative verbs and other speech verbs, and fully developed extended meanings of reported speech constructions that have no apparent connection anymore with attributing utterances.

Please join us for our next session on the 26th!

Abbie Hantgan and Karolina Grzech brought us a very rich and engaging third session in our workshop series.

Abbie Hantgan’s data session on Ben Tey raised fundamental questions about the illocutionary status of reported speech clauses since the language contains a dedicated quoted imperative. A second feature of the language that makes it particularly relevant for the study of reported speech is the presence of a form that Abbie analyses as a ‘quotative topic’. Both of these categories broaden the range of structures that seem dedicated to reported speech contexts and help further contextualise them.

The data session by Karolina Grzech demonstrated the importance of contrastive evidence in the study of evidentiality and reported speech: while some morphological aspects of quotative/reportative evidentials in neighbouring languages seem quite similar to structures in Upper Napo Kichwa, the interpretation of these structures in Upper Napo Kichwa appears to be rather idiosyncratic. In the context of reported speech, markers that signal epistemic authority elsewhere can be used to express mistaken belief, among other meanings. The data also further appeared to demonstrate a link between the marking of switch reference and extended interpretations of reported speech.

Many thanks again to everyone who participated and, above all, to the presenters. We are looking forward to seeing you again at the next session on the 12th of November!

We thank everyone for participating in the second session of our reported speech workshop, and especially Benjamin Brosig and Dolgor Guntsetseg (in collaboration with Elena Skribnik) for engaging presentations about Khalkha Mongolian!

We saw very detailed accounts of no less than nine different strategies to express reported speech in the language and learned about meaning extensions in Khalkha Mongolian, which showed an impressive semantic range.

Prominent questions that came up related to glossing conventions, the description of semi-grammaticalised interpretations of reported speech and the status of indirect speech in non-European languages. Issues to further explore in the months to come!