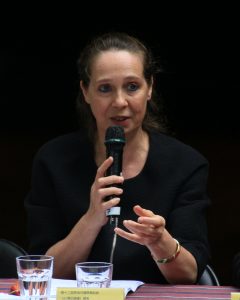 This presentation adopts Einar Haugen’s four-step sociolinguistic model as a frame of reference for the description of language standardization processes in Taiwan and its interrelation with literacy practices.  The narrative of language debates can be highly emotionally charged and quite often has been perceived to generate conflict between the social acceptance and the selection of one speech/written form as the norm over another. Discussions of this type have been gathering even more momentum with the inclusion of indigenous languages and the promotion of migrant Southeast Asian languages in the curriculum.  Point of departure is the body of research that engages with a discussion of the people and institutions behind the efforts of language planning and how this in the course of the past decades and in step with democratization has expanded its network of resources and researchers. The sociolinguistic analysis will evaluate the ideological undercurrents of the assorted language actors, and explore the extent to which certain language attitudes are still prevalent or whether they have given way to alternate concerns affecting the ideology of standardization in language planning debates in a multicultural Taiwan.

Ann Heylen, PhD. K.U.Leuven in Chinese Studies is Professor at the Department of Taiwan Culture, Languages and Literature, National Taiwan Normal University (NTNU), and Executive Director of the International Taiwan Studies Center (ITSC), at the College of Liberal Arts, NTNU. She is a founding member of the European Association of Taiwan Studies (EATS) and editor-in-chief of the East Asian Journal of Popular Culture (EAJPC, Intellect, UK). Her doctoral dissertation was published as Japanese Models, Chinese Culture and the Dilemma of Taiwanese Language Reform (Harrassowitz 2012) and she has published on topics that cover the history and historiography of Taiwan, with special attention to Dutch Formosa and the Japanese colonial period (1895-1945). She is currently working on a monograph exploring Formosa media narratives as part of a broader project on the relations between the Low Countries and East Asia.  She can be reached at annheylen@ntnu.edu.tw.