As already mentioned, in addition to the hardware, a computer also needs a set of programs—an operating system—to control the devices. This page will discuss the following:

When you can recognize the typical parts of each operating system’s user interface, you will mostly be able to use both Windows and Linux as well as e.g. Mac OS.

The role of operating system in the computer

What happens when you turn on your computer or smartphone?
– The computer checks the functionality of its components and any devices connected to it, and starts to look for the OS on a hard drive or other memory media.
– If the OS is found, the computer starts to load it into the RAM (Random Access Memory).
– When the OS has loaded, the computer waits for commands from you.

The name of the Windows OS comes from the fact that programs are run in “windows”: each program has its own window, and you can have several programs open at the same time. Windows is the most popular OS for home computers, and there are several versions of it. The newest version is Windows 10.

Linux is an open-source OS, which means that its program code is freely available to software developers. This is why thousands of programmers around the world have developed Linux, and it is considered the most tested OS in the world. Linux has been very much influenced by the commercial Unix OS.

In addition to servers, Linux is widely used in home computers, since there are a great number of free programs for it (for text and image processing, spreadsheets, publishing, etc.). Over the years, many different versions of Linux have become available for distribution, most of which are free for the user (such as Ubuntu, Fedora and Mint, to name a few).

Mac computers are popular because OS X is considered fast, easy to learn and very stable and Apple’s devices are considered well-designed—though rather expensive.

A user interface (UI) refers to the part of an operating system, program, or device that allows a user to enter and receive information. A text-based user interface (see the image to the left) displays text, and its commands are usually typed on a command line using a keyboard. With a graphical user interface (see the right-hand image), the functions are carried out by clicking or moving buttons, icons and menus by means of a pointing device. 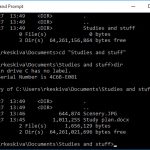 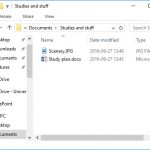 The images contain the same information: a directory listing of a computer. You can often carry out the same tasks regardless of which kind of UI you are using.

Modern graphical user interfaces have evolved from text-based UIs. Some operating systems can still be used with a text-based user interface. In this case, the commands are entered as text (e.g., “cat story.txt”).

In most operating systems, the primary user interface is graphical, i.e. instead of typing the commands you manipulate various graphical objects (such as icons) with a pointing device. The underlying principle of different graphical user interfaces (GUIs) is largely the same, so by knowing how to use a Windows UI, you will most likely know how to use Linux or some other GUI.

Most GUIs have the following basic components: