On 25th January I attended a workshop meeting hosted by the Römisch-Germanische Komission, part of the German Archaelogical Institute, at their offices in Frankfurt. The meeting was intended to bring together researchers interested in using open data to record portable antiquities, particularly those found by hobbyist metal detectorists.

This meeting was interesting because it brought together, in addition to international researchers from Finland, the UK, Belgium, Denmark and the Netherlands (see about SuALT’s “cousin” projects elsewhere on our blog), state archaeologists from the different German Federal areas. What was clear, was that while something is known of how much metal detecting activity there is and what its impact might be, it seemed that much of this knowledge is still also rather patchy in places. This is likely one symptom of having different heritage laws in different federations, and it is hopeful that the meeting in Frankfurt may have marked the beginning of more communication between regions on this issue.

The meeting was also an opportunity to update on the various finds-recording open databases and platforms across Europe, including our still-early progress with SuALT in Finland, and hearing more about the progress of the projects of DIME (Denmark), PAN (Netherlands) and MEDEA (Flanders, Belgium). The longest-running finds-recording program, the Portable Antiquities Scheme (England and Wales) was of course also presented.

Finally we had a discussion of the larger linked open data schemes, and specifically ARIADNE. There are hopefully more cooperation opportunities in this impressive program for Finland. Furthermore, the existence of transnational datasets further highlights the importance of integrating our own future databases into existing infrastructures as much as this is possible.

The next day several of us spent the morning user-testing the PAN database, finding out what we as researchers could do with the database as it is currently presented, and what else we might want to see. This was very useful for PAN’s development of course, but also gave important insights into the kinds of capabilities SuALT will need in the future.

In the end, the workshop was extremely useful for reconnecting with many international colleagues, especially when SuALT is planning its own Expert Advisory Panel meeting soon with our overseas specialists in early March. It also highlighted how much dialogue is still needed, not only for developing ways to record finds data that is useful to finders and researchers without compromising archaeological sites, but also for general understanding between different regions concerning the nature and scale of hobbyist interactions with the cultural heritage environment. 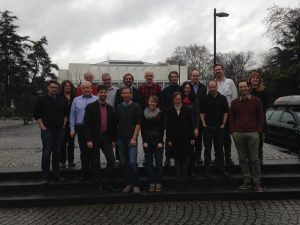