During my research mobility period to the University of Oklahoma, I have been able to learn much about how the archaeologists and anthropologists here work to engage with the wider public. One key area of great interest to my colleagues at OU – especially SuALT Expert Advisory Panel member Prof Bonnie Pitblado – is the impact of artefact hunting and collecting in the region. Through talking to members of the Oklahoma Public Archaeology Network (OKPAN) and through accompanying Prof Pitblado and others on visits to collectors’ homes, I have learned that collecting is a long tradition for many current enthusiasts – who in some cases are perhaps the second or even third generation within their family to collect artefacts.

In the context of Oklahoma, the majority of collected artefacts tend to be lithics, often from Palaeo-Indian cultures such as the Dalton and Clovis typologies. The collectors I have met tend to take very good care of the items in their stewardship, and they have detailed notes and documentation, as well as sometimes engaging anecdotes about their own stories of acquisition, which add to the individual object’s biographies. The scale, and long history of collecting, means that to ignore or discount these private individuals that have amassed material but also knowledge (both of the artefacts and of the landscapes in which they were found), would be a disservice to archaeological research, as is the case with many documented metal-detected finds in Europe. It is also unfair and oftentimes inaccurate to assume that the existence of these collections automatically means a fascination only with the objects’ intrinsic (monetary) value, or that the collectors and searchers of this material are automatically deliberate law-breakers. For this reason, Prof Pitblado and others talk about the notion of Responsible and Responsive stewards.

Responsible stewards are those individuals who are – quite literally – taking on a stewardship role, taking care of cultural material and ensuring that it stays together. One collector that I have come to know has even gone to the lengths of spending his own money to buy collections of older artefact hunters (sometimes active way back in the early 20th century) in order to ensure that their field notes and collections stay together for future researchers to access. This has been in contrast with the alternative outcome, which would have been that the objects and papers dissipate onto the market through relatives who are less interested in the collection and look simply to sell or otherwise dispose of their inheritances. An active non-professional researcher himself with several published archaeological articles to his name and a history of working alongside professional archaeologists, and with a long term plan to bequest his collections to the Sam Noble Museum in the city of Norman, this person is most certainly a responsible steward of the objects for which he cares. 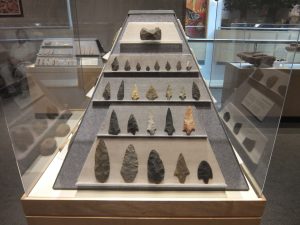 Some of the lithic artefacts on display at the Sam Noble Museum, Norman, Oklahoma.

Responsive stewards, by contrast, may not yet be at the stage of fully documenting and allowing access to their collections in a way that maximizes their research value, and may even be engaging in irresponsible practices such as removing objects from the ground without due care and find spot recording. However, as Prof Pitblado and others have noted already elsewhere, many if not most people are prepared to change their practices with regard to artefact hunting and collection, once the importance of doing this – such as the greater richness of archaeological knowledge to be gained – is pointed out to them. Another collector that I have met possibly falls into this category. It became apparent that, unfortunately, some objects in their collection were found on land for which permission to remove material would not have been forthcoming (although it is not clear whether this was explained to the collector during their many decades of active searching). Yet at the same time, the collector has kept their finds together, in a situation where many others were also searching on the same land, and likely taking objects away for sale or other forms of dispersal. In addition, this person has for a long time allowed access to their collection to local archaeologists and museum curators, and in recent discussions appears open to digitizing some of their objects so as to allow worldwide access via the web. These people, responding to outreach, communication and education efforts, are hence responsive in their outlook.

Another vitally important aspect of cultural heritage in the USA is that, like Finland, the country is home to indigenous peoples. With some 39 officially recognized Native American Tribes, Oklahoma has one of the largest and most diverse representations of indigenous culture in the USA, with only the states of Alaska and California having more Tribes within their territories. These are essential communities with whom archaeologists and anthropologists must engage, especially as much of the archaeological material discovered in Oklahoma has a direct connection to indigenous cultures represented in the state today. In this regard, Oklahoma has a fascinating and also troubling history, in that – additional to the groups who already lived in the land that now makes up the state of Oklahoma – many more Tribes were displaced to here after white European settlers seized their original habitats. It is not my intention to go into a detailed history in this short blog post, but needless to say that the legacy of this difficult past continues to play out today, and thus involvement with and control over cultural heritage is a particularly important issue for many of the Tribes in the present. 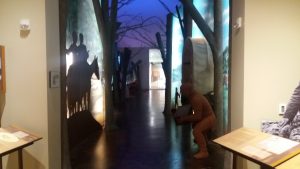 I have had a truly instructive and enriching experience thus far, simply observing and learning about the patient and inclusive approaches that Prof Pitblado, Dr Amy Clark, Dr Debra Green and many others at OU are taking with the communities around them. We are similarly aiming to be inclusive and collaborative in our development of SuALT in Finland, and I have really appreciated seeing how the work is going in Oklahoma. Similarly, in early October I had the opportunity to be a guest speaker for the Oklahoma City Chapter of the Oklahoma Anthropological Society – a state-wide society for interested avocationals – at which I was able to present my research on working with non-professionals in the UK and Finland, and to introduce SuALT. I was happy to receive positive feedback from Society members, who seemed very interested in the work we are doing in Finland.

Although a finds-recording scheme such as SuALT does not currently exist in Oklahoma, and the logistics, resourcing issues and legal complications of rolling out such a scheme across the whole of the USA make it virtually impossible and more than a little bit unlikely, discussions here have nonetheless turned to digital possibilities. There are plans afoot within OKPAN, for example, also working with enthusiastic avocationals with an interest in photogrammetry, in making 3D images and even 3D prints of some cultural objects in the future. Placing large archaeological finds databases online – as we have seen already with such as the Portable Antiquities Scheme, and anticipate seeing with SuALT – can open up new research avenues, and allow access to scholars situated far away from the physical collections. There is also a new group in formation – the Gang of Oklahoman First American Researchers (GOFAR) is in early stages of formation, but is collecting ‘gang’ members from academia, from Native American groups, and from the avocational community.

Although I only am at the end of my research mobility in Oklahoma, I have found this an enriching and rewarding experience. My enthusiasm is renewed and I am keen to look even more closely into meaningful ways of increasing community engagement with SuALT – across increasingly diverse community groups – and I feel certain that I have deepened links and possibilities for collaborative partnership between what is happening in Oklahoma, and what I and the excellent SuALT team are trying to do in Finland. 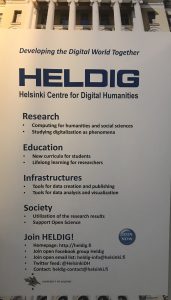 During the day we heard about what services are available at the moment and what is still being developed. The day started with an excellent keynote lecture by professor Charles van den Heuvel from Huygens Institute and University of Amsterdam. In his talk “Infrastructures and Interfaces for Digital Humanities Research: Dutch Experiences and Expectations” professor van der Heuvel stressed the importance of cross-disciplinary collaboration and data management skills. Digital Humanities is not only interface design, it’s also important to ask the right questions of the data through research.

After this followed 22 presentations, including a short presentation by Ville Rohiola, Anna Wessman and Mikko Koho from SuALT. In the paper we presented the project and its aims shortly. 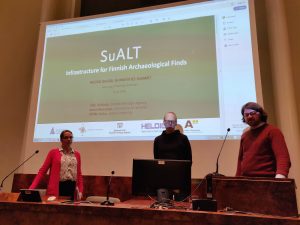 The outcome of the day hopefully underlined to everyone that digital humanities is a rapidly growing field, and an increasing number of projects are already applying digital methods to their studies. During the Summit it also became clear that there is an enormous potential offered by digitalisation. All the new available methods, techniques and software tools offer advantages that we could not even dream about 10 years ago and the development is rapid. Furthermore, we learned that there is a need for closer collaboration between scholars in the field of Humanities and Computer Science. These new digital projects need deep knowledge of both the source materials and applicable computational methods in order to succeed. That is why it is important that the different disciplines work hard to understand each other.

SuALT’s cousin project in Denmark, DIME (Digitale Metaldetektorfund/Digital Metal Finds), is since September 20th available online. During its launch day DIME had 6.700 visitors, 289 new users and 760 finds submitted, which tells that this is a true success story from the beginning.

DIME is a database where amateur archaeologists including metal detectorists can register their finds. There are among 4000 metal detectorists in Denmark. The detectorist community can from now on self-record their finds into a digital platform with the help of their mobile phones. DIME is also a tool for researchers and the public. Through DIME people can now see different kind of artefacts and follow where in Denmark they have been found.

DIME is one of the biggest crowd-sourcing and citizen-science projects ever in Danish archaeology. It is a research project between three museums (Moesgaard Museum, Odense City Museums, the Historical Museum of Northern Jutland) and the University of Aarhus in collaboration with the KROGAGERFONDEN Foundation. The project leader Dr Andres Dobat from Aarhus University is also project partner for SuALT.