By Ville Rohiola
In the end of November, Ville Rohiola from the Finnish Heritage Agency visited Denmark as a part of research mobility plan of the SuALT project. During the visit, Rohiola met colleagues in Aarhus, Odense and Copenhagen. The mobility was part of the co-operation with other public finds database recording projects, in this case, with the recently launched DIME, a digital portal for metal detecting finds in Denmark. At the time of the visit, DIME had been in use for two months and it showed that the new digital tool sparks enthusiasm among metal detectorists. 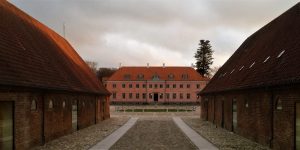 The main goals of the trip was (a) to get an overview of the metal detecting archaeology in Denmark, and (b) to see how the DIME portal has been developed and built up to its form, and (c) become familiar with how different users, local museums and the National Museum of Denmark, use the database in their workflow. 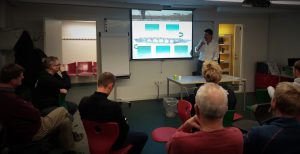 The statistics of the first two months show that almost 800 users have already registered to the platform and almost half of them have made a notification of a find to the database. The number of finds after two months was about 7 000 which is a great amount. At this point, most of the local museums working with metal detecting finds are initiating to use DIME in their workflow. The platform seems well received by its users and the feedback has been positive.

The travel of one and a half week included meetings with people from different institutions working with DIME. In Aarhus, most of the time was spent in and the Department of Archaeology and Heritage Studies of Aarhus University. After visiting Museum Skanderborg, the day continued in Kulturhuset Skanderborg with lecture by Associate Professor Andres S. Dobat, the DIME project leader from Aarhus University and SuALT’s international partner. In his public lecture, Dobat presented DIME and showed new possibilities to work with metal detecting finds. The lecture audience, mainly local metal detectorists, followed the lecture intensely and the room’s atmosphere was filled with co-operation.

After Aarhus, the mobility continued in Odense where Rohiola visited Odense By Museer. In the local museum, it was possible to observe how the museum archaeologists as public officers deal with metal detecting finds. The last stop of the travel was Copenhagen where Rohiola visited the National Museum of Denmark and met people working with Danefae finds, a declared treasure trove find in Danish. The conversations about metal detecting process and tour in different units of the National Museum were very interesting. 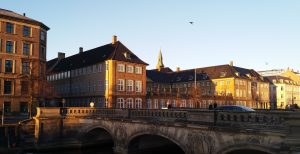 The research mobility in Denmark indicated clearly the reasons why Danish metal detecting archaeology is internationally renowned. One of the main reasons is that Danish archaeology has had a close and long-standing cooperation with metal detectorists. It is the result of a liberal model of metal detecting where focus is on cooperation and inclusion. DIME is a good example and continuity to that – a new way to put even more effort to the cooperation among people working together with collectively shared cultural heritage.