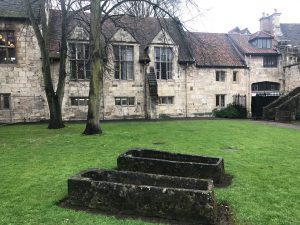 The workshop took place at Kings Manor, University of York

The European Cooperation in Science and Technology (COST) is a funding organisation that creates new research networks, so called COST Actions. These networks offer an open space for collaboration among scientists across Europe. Archaeological knowledge production is explored through one such COST Action, called ARKWORK, and through these working groups members are able to meet in a variety of networking, such as conferences, workshops, training schools etc.

Anna Wessman took part in one of these workshops this week: Co-design of digitally -mediated experiences in archaeology, in York, UK. Participatory Design, Co-design or User Experence Design is an approach where one attempts to involve all stakeholders in the creation process to help ensure that the final product meets the needs of the end-users. During the past decade UX research has developed fast and therefore it’s important to learn new techniques. Two intense days later it’s time to sum up what we learned: 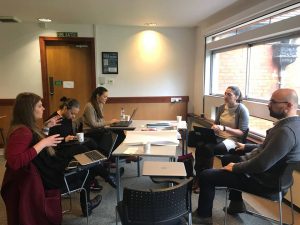 The 20 participants that took part in this workshop were divided into four groups, each with one specific case study and with a facilitator who was leading the discussions. Anna was in a group led by Eleonora Gandolfini and our task was to design an online interface for the Southampton Library Special Collections and Archives.

These special collections are large and very diverse. They have been digitized but are not accessible to the large public because it is difficult to navigate between the different websites. Our task was thus to come up with a solution to this dilemma and to structure the interface so that it would entice the audience to engage with the collections in a new way. 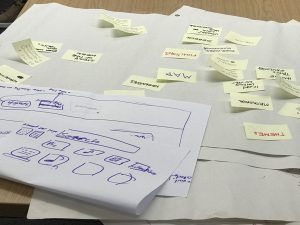 In the beginning we were throwing ideas on post-its

This was not an easy task. We discussed the metadata a lot and about how we could make these collections relevant to the community. We also came up with two imagined end-users of this interface, so called personas, by using User Experience Design Cards developed by the University of York.

Despite the difficulties we were able to come up with a mock-up platform, we designed search tools, built bridges between the collections’ through narratives and even came up with some new content. It was challenging but fun and I think we all learned a lot through this process. 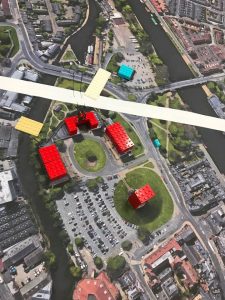 The other three groups worked on different assignments. One group designed a prototype for a digital archaeogame, another group designed engagements to the Eye of York  while a third group co-designed an interface for a larger audience with an interest in the past, something that was named ‘Pastlandia’ by the participants.