Last October I spent a month at Aarhus University in Denmark. The idea was to spend some time learning about the Danish DIME, which is a role model for FindSampo, since both can be used with a mobile phone. I had long discussions about metal detecting with my host Dr. Andres Dobat, worked on a collective article about finds recording schemes while also rehearsing my Danish. As it happens, I shared an office with a Norwegian Ph.D. student Caroline Fredriksen who is working on a thesis about metal detecting in Norway, which led to interesting discussions about the similarities in the Finnish and Norwegian legislation. We have a lot in common. 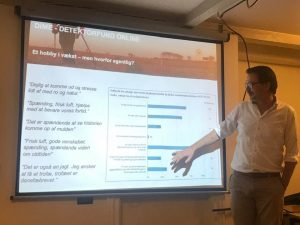 Andres Dobat is introducing the motives of Danish metal detectorists in a public talk in Lejre, Roskilde

In Denmark, metal detecting is legal and it has been a popular hobby for almost 40 years. At the beginning of the 1980s, the attitudes towards detectorists were still skeptic among many archaeologists but the change has been fast due to the enormous amount of new knowledge that metal detecting has brought with it.

Since DIME launched in September 2018 over 40 000 finds have been reported in and it now has over 1600 users. Thus, DIME has turned out to be a true success story. However, more development needs to be done. For example, for the finds to be used by researchers they need to be of good quality, which might be challenging when out in the field. Luckily, it is possible to download new, better quality images into DIME and to FindSampo (in the future).

Adding a mock find into DIME. This is a shield from a door lock and is not considered to be an old find.

During my stay, I also had the chance to get out metal detecting with two metal detectorists Allan Faurskov and Carina Boese Voorhies, who also happens to be TV stars from the Danish TV-series Muldens mysterier and Gulgraverne. Even though no spectacular finds were found during the afternoon, I had the chance to observe how DIME is used in the field, which was valuable in respect to the future testing with FindSampo, as well as to discuss metal detecting as a hobby with the detectorists.

The month went by fast, unfortunately, but I brought back many ideas and insights about how we can improve FindSampo and collaborate with detectorists here in Finland even more inclusively than before.