It was on the 9th of August 2018 and the third day of the 2018 HSS. The day’s lecture started at 9:00am with Prof Maria Brockhaus. She gave a brief history of international forest policy, policy domain and the powers that influence international forest policy formulation. Despite data availability suggesting alarming rate of deforestation with supporting evidence from satellite imagery and aerial photography and the resulting consequences like exacerbating global warming ,there has not been any global forest treaty. Leading to the failed attempt to negotiate a global forest treaty at Rio Summit in 1992, countries with tropical forest oppose global treaty by advocating for national sovereignty over forest, while supporters of a convention see a global conservation-oriented forest agreements. The role of actors and actor groups in global forest policy formulation was also discussed. Prof Brockhaus discussed policy instrument on deforestation, restrictions on activities that damage our environment, issuance of permits for resource exploitation, planning and zoning to exclude protected areas from direct benefits as a regulatory mechanism to manage deforestation. From economic point of view, polluter pay systems and reward for environmentally friendly behaviors were also discussed. Information on conservation in relation to how people’s activities on the environment should made be readily available for public consumption. The role of the impending REDD+, land use options, forest certification, FLEGT/VPA and PES in forest conservation was also elaborated by Prof Brockhaus. 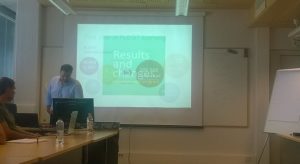 Jussi Viitanen, followed Prof Brockhaus with FLEGT as an EU forest policy instrument. Jussi’s presentation highlighted FLEGT as EU’s responds to global illegal logging concern. The presentation took the class through the EU concern and increasing pressure of tropical deforestation between 1980 -1990,  the G8’s plan of action on illegal logging between 1998 -2003 and in 2001-2005 and the World Bank FLEG regional initiative. It was revealed during the presentation that eight (8) countries including Malaysia are at the negotiation stage, six (6) including Ghana at the implementation stage and one (1) country, Indonesia is at the operational stage. Jussi informed the class about the negotiation as well as the Legality Assurance System of the VPA. The presenter told the class that the first FLEGT license has already been issued in Indonesia. Emphasis was laid on the fact that VPA introduces no new law into a country but ensures that a country adheres to the implementation of her own laws. 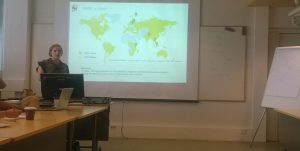 After launch at 13:00, Maija Kaukonen took the class trough forest policies at the landscape level for an hour. A presentation which was pure map and chat based was very comprehensive, gave the mission of WWF as “To stop the degradation of the planet’s natural environment and to build a future in which humans live in harmony with nature”.

The mission reflects the alarming rate of deforestation and its impact on biodiversity. The class was told that between 1970 and 2010, 56% of tropical species have been lost through deforestation. It was explained that landscape approach aimed at deforestation prevention is by enhancing land use options which retains forest for several purposes as well as optimize the productive capacity of the adjoining landscape. The presentation highlighted the success choked by WWF in the Nepal using the landscape approach at solving problems of deforestation and fragmentation and that the approach has been used to increase Tiger population by 198 from 2009 to 2015 and Rhino population from 375 in 2005 to 645 in 2015, a remarkable improvement. 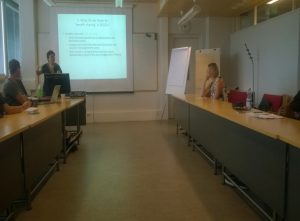 She explained that participants of the Paris agreement did not expect an agreement to be reached, but what was reached was not binding, It set the stage or REDD+ results based financing.

How then will the financial benefit be shared? Benefit sharing in REDD+ concept was explained as distribution of net gains either directly or indirectly from REDD+ implementation. REDD+ benefit comes with implementation and transaction cost, revenues forgone resulting from alternative forest land and resource use, changing forest/ land use, representation, management of finance, governance and tenure, This brings together several actors in REDD+ implementation process. Who then benefits? Will the expectation of the poor be met? The day was informative and very interactive.