Strictly speaking, it was the last day to have class in the summer school, and there will be a public seminar and group work presentations in the next two days.

Seeing that the summer school is coming to an end, it reminds me of the days when I first arrived in Helsinki. I didn’t know how to get to the Unihome because I only search for the University of Helsinki on Google Maps. After the plane was taken, we went to the city center by the train, then carefully looked at the Moodle found that I made a mistake in the address, and the reception in the Unihome was going to, so I took a taxi to Unihome, began the life of Helsinki summer school.

Today the first course was our lovely professor Markku Kanninen’s class, which mainly showed us Ecosystem services, risk and climate change, because we had already been introduced the concept of Ecoysystem services, so this lesson skipped the concept directly. And he used a photo to introduce the elements of an ecosystem, such as managed natural forest, agriculture, village, and so on. Then he asked us about the potential risks in such an ecological environment.He also introduced the impact of Mitigation and Adaptation on Ecosystem Services and Climate change. Later, he showed us the changes of Cumulative emissions and global temperature from 1861 to 1880, inferring that global temperatures would reach 1.5 °C around 2040 at the present rate of warming. Then expressed the cumulative emissions of CO2. In addition to this, we also learned the concept and influence of exposure, vulnerability and resilience . From his class we can always learn unexpected knowledge. In my opinion, he is really a warm, friendly and nice man. 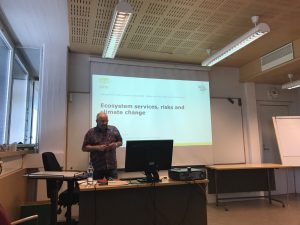 After 15 minutes of break time, we ushered in the second class. The teacher started the class and said that he hope we still remember him. I certainly remember that he is Adrian Monge, a PhD student in Helsinki, and we knew that he is from Costa Rica on the last day. I remember the three days of the field trip, he went together with us and explained the various problems. He also showed his skillful technique in barbecue and went to the sauna with us. He likes to talk some jokes when we were chatting, and everyone was very happy. How can we forget such a humor man? 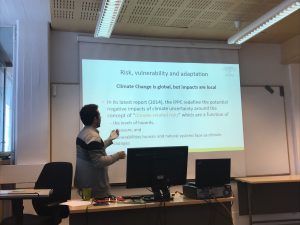 The course began, and he introduced the overview of Risk, vulnerability and adaptation and their relationship to us. Then we also learned about the relationship between CBA (Community Based Adapation) and the livelihood framework. What’s more, he also introduced the integrated approach and the trade-offs to us.

After the lunch break, Adrian Monge brought us CRiSTAL (Community-based Risk Screening Tool – Adaptation and Livelihoods), then divided us into two groups of four people, and told us to start group discussions and find the problem in the revelent materials, then talk about the solution of the problems it. This class gave us a good understanding of the many factors of poverty and allowed us to learn how to analyze and solve problems. 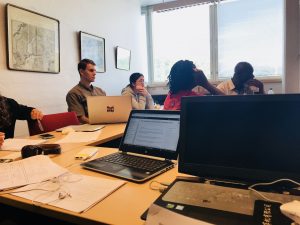 Finally, I am very happy to have such an opportunity to attend the summer school in Helsinki. As the time goes by, it’s time to leave vikki campus and say goodbye to the teachers. I really miss the day of arriving  Helsinki. I seems to be taking the English listening test every day during the first week, but the field trip in the second week made us get close to each other, I also began to understand the course content and everyone’s communication, then in the third week I started to take the initiative to communicate in English. I hope that the summer school will last longer. 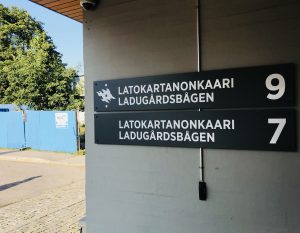 I sincerely wish everyone who I met during the summer school, and hope that we will have a chance to meet again in the future.