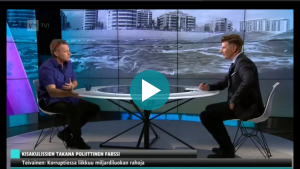 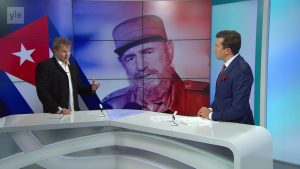 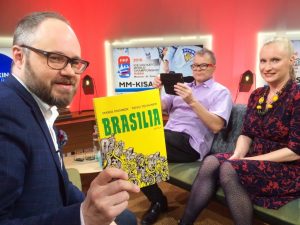 Over many years, I have spent a considerable amount of my time trying to be helpful for media in Finland and elsewhere. Here, I will share some of these activities, emphasising my activities in 2016 (to give you an example of one year).

In 2016 I debated the educational reforms with the minister of education on A Talk TV program; discussed Obama’s visit to Cuba on morning TV; commented on Brazil in various programs, both on TV and radio, sometimes together with my coauthor Maria Manner.

There have been many other interviews on TV, radio and written media during 2016. Apart from the main TV channels, I was interviewed (in English) on Finnish politics for the Newsmakers program of HSTV. 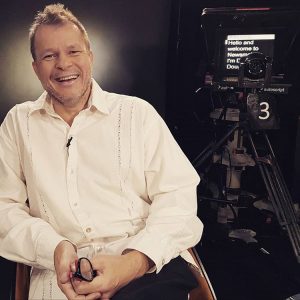 The main political weekly of Finland Suomen Kuvalehti did a story on me, with pictures of my megaphone. 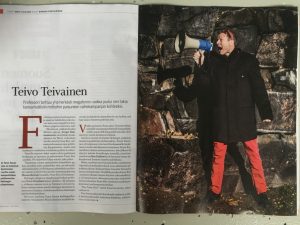 I try to comment mostly on things that I can claim at least some expertise on, though sometimes there are borderline cases like when the main afternoon paper convinced me to comment on the headwear of the Finnish president’s wife in Iran. 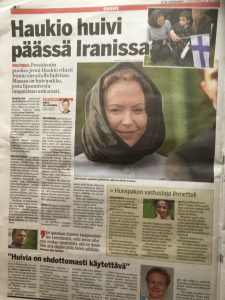 One of my favourite topics is freedom and I was happy to comment it for the paper of one of the biggest trade unions of Finland, especially since the picture was taken in my own neighbourhood Merihaka. 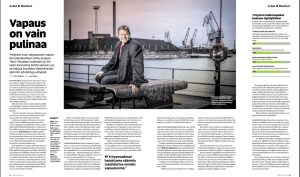 I also commented the link between freedom and “free” trade for Pressiklubi program in 2016. This one was also filmed in my neighbourhood Merihaka. 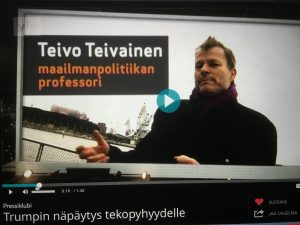 Blasting about Trump, liberalism and trade politics for Pressiklubi, TV 1, 2016

In 2016, I also commented a case of Cuban volley players’ sexual violence trial in Finland for a AmericaTV TV news in Miami. Note that in this commentary I was presented as a journalist, which is probably wise in order to avoid embarrassingly overextending my area of professorial expertise. 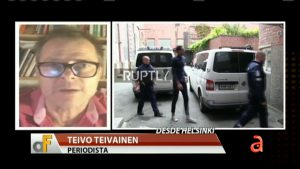 Since 2013, one of my nicest media experiences has been a monthly radio show Kaukoputki. Together with our wonderful radio host, Iida Ylinen, I get the possibility to discuss and debate world political issues with Charly Salonius-Pasternak from the Finnish Institute of International Affairs in the biggest radio channel of Finland. 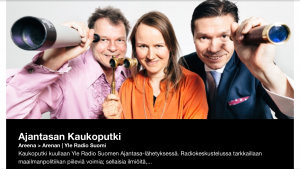 Kaukoputki world political program on the biggest radio channel of Finland since 2013.

Various of the programs are available here. I guess the idea is that Charly and I represent somewhat different worldviews, though we seem to agree surprisingly often.

In 2016, our Kaukoputki radio program went visual, so you can now also see us debating here. 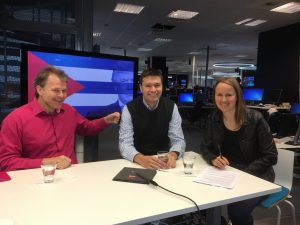 Another, and more specific, series of radio programs consisted of my World Political City Walks. I walked around Helsinki and discussed issues that ranged from historical memory of racist bar door policy to analogies between monetary and military sovereignty and ethnic profiling by the police. 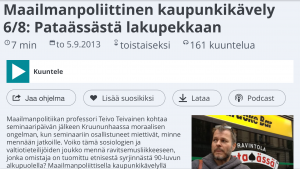 Radio series of my World Political City Walks included moral reflections in front of a bar whose owner has been sentenced for racial discrimination many years ago. My research on how to deal with past world political atrocities met practical dilemmas of whether to enter a local bar.

In this series, my interview with a random police officer at the railway station gained importance as a proof of ethnic profiling. The Minister of Interior tried to deny such practice after a human rights report had suspected it happens in Finland. The police officer I interviewed, however, had happily admitted doing so routinely. I truly enjoyed it when the tape was played in a live interview I had together with a conservative member of parliament.

Of my earlier Finnish TV interviews, a couple of examples. I enjoyed this debate with the Foreign Minister of Finland, Erkki Tuomioja, about Wikileaks. 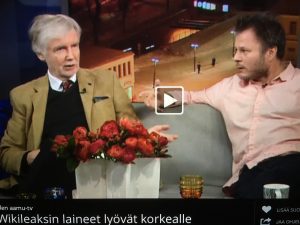 This was an early morning interview when Hugo Chávez had just died. 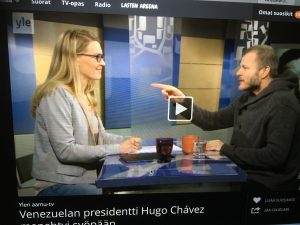 Here I am interviewed about the World Economic Forum of Davos. 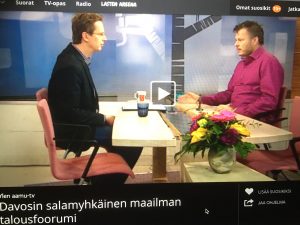 One of my most massive media exposures took place after lies were spread in Russian media about a World Political City Walk that I organized for the Museum of Contemporary Art Kiasma. One TV interview in Finland took place in Pressiklubi and this radio interview also gives some decent background. Some realiable background in English on one of the strangest episodes of my life can be found for example in these articles in Helsingin Sanomat and St Petersburg Times.

If you want to have a look at some of the false claims that circulated in Russian media about my city walk, this article includes links to some of the Russian sources. My understanding is that one of the main factors that helps to explain the massive campaign spreading misinformation in Russian media about my city walk was was the need to “normalize” the Pussy Riot trial in Russia. Big Russian media houses falsely claimed that I was facing criminal charges in Finland for a Pussy Riot related activity, so that they and the Russian Ministry for Foreign Affairs could refer to my fabricated case and say: “it is not true that with the Pussy Riot trial Russia would be turning its back to international rule-of-law standards. Look at Finland, a country well-known for rule of law. Even there this professor is facing criminal charges for a similar action.”

In Finland, these claims were clearly known to be nonsense from the beginning. There were never any charges or even a preliminary investigation by the police around my walk, during which no one tried to enter any church. My university and all media in Finland repeated the truth about the case many times over. In Russia also, some of the media published correction notes, and I even received a personal apology letter from the editior-in-chief of Moscow Times. Other media, more closely connected to Kremlin, continued to publish misinformation and lies, though the media campaign around my case calmed down soon after the Pussy Riot trial was over in Russ

I will collect a few old interviews here (still in construction, these are just some examples): 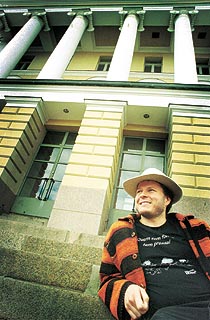