The Finnish open access monitoring efforts are integrated with the national collection of publication data conducted by the Ministry of Education and Culture. The same format for reporting the open access status of each publication has been in use since 2016, which means that there is now coherent annual data available from a period of four years (2016–2019).

The national data collection is of great importance to universities, as a considerable part of their funding is allocated based on the number and quality of their publications. Thus, they have a strong motivation for collecting as comprehensive and reliable data as possible on the publications produced by their faculty. Starting from 2021, a new open access factor (1.2x) will be added to the funding model. Since the funding model relies on data from the previous three years, the data collected now will already have an effect on the amount of funding each of the universities will receive in the future. This means that the universities are well motivated to collect accurate data on the open access status of each publication, and of course, to look for ways to increase the number of open access publications.

The national data collection is of great importance to universities, as a considerable part of their funding is allocated based on the number and quality of their publications. Thus, they have a strong motivation for collecting as comprehensive and reliable data as possible on the publications produced by their faculty.

The practical implementation of the data collection is the responsibility of CSC – IT Center for Science, a company jointly owned by the Ministry and the universities. CSC compiles the publication data reported by the universities into the national Virta publication information system. The Virta data can be browsed in Juuli, a discovery interface for publication data maintained by the National Library of Finland. For example, in the case of University of Helsinki, the publication data is transferred from the university’s own Tuhat research information system into Virta, from which it is then automatically harvested into Juuli each night. Starting from June 2020, the information will be also available in the new Research.fi portal (built by CSC), which will provide comprehensive data on the Finnish research outputs, infrastructures and researchers.

As usual, the deadline for reporting the 2019 publication data was at the end of March this year. Although the quality of this data is likely to improve to some extent over time, it is already good enough for drawing preliminary conclusions on the most recent trends. The following analysis is based on data on the open access status of publications compiled from the Juuli portal during April and May, 2020. 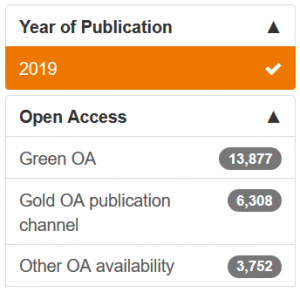 The open access status information in the data collection has been divided into a number of different categories according to the way openness has been achieved. Publications can be openly available at publisher’s service or they can be made open access by self-archiving them into a repository. There is a significant overlap between these two groups, as publications that have been openly available already at publisher’s web site can also be self-archived (”green OA”). In addition, the publications that are openly available on publisher’s service are divided into two sub-categories depending on whether they have been published in a fully open publication channel (”gold OA”) or as individual open access articles in a subscription-based publication channel (including the so-called ”hybrid OA”).

The share of open access publications produced by universities varies significantly depending on the publication type (Figure 1). For example, published reports are now almost invariably available online, but only a fraction of monographs end up in free distribution. In this text, however, I will focus on peer-reviewed scholarly articles. These are divided into different categories according to the classification used by the Ministry of Education, depending on whether they have appeared in a journal (publication types A1–A2), as part of a book (A3) or in a conference publication (A4).

Compared to similar data from previous years, open access to peer-reviewed scientific articles appears to have become significantly more commonplace at all universities (Figure 2). The top position among the universities is held by the University of Jyväskylä, in which the share of open access articles is already above 80%. The main reason for this is a long-term commitment by the university for developing support services especially for self-archiving.

Although the amount of open access has been increasing rapidly in recent years, it has not quite kept pace with the most ambitious policy goals. Since 2016, the official goal at the EU level has been to achieve 100% open access by 2020. This goal has been a key starting point for Plan S, an open access policy program introduced by a number of major European research funders. In Finland, the Ministry of Education and Culture has also set a similar national target a few years ago. Based on the current situation, it seems likely that Finland will not reach this level in 2020, but on the other hand, there is no reason to assume that the positive development would not continue.

Compared to the situation four years ago, the total share of open access publications has more than doubled.

One probable reason behind the rapid growth of the ”other open access” category is the proliferation of so-called hybrid OA. Most of the open access policy makers have been critical of hybrid OA, but despite all of the concerns,  it seems to be now gaining ground in Finland. During the past couple of years, an increasing number of articles published in subscription journals have become openly available, often thanks to agreements the university libraries and FinELib have negotiated with the publishers.

The single biggest reason for the increase of self-archiving are improvements in the support services provided by universities. Most publishers have allowed the self-archiving of author’s own version of the publication for a long time, but in the past, only a small percentage of researchers had taken advantage of this opportunity. In addition, many universities have now begun to collect open access articles systematically from the publishers’ web sites into their repositories, which has helped to increase the total share of self-archived articles to 55.9% of all peer-reviewed articles. Nevertheless, the additional amount of open access provided by self-archiving (”Green OA+”, Figure 4) has also been growing steadily, to 23.5% of all peer-reviewed articles in 2019.

It should be pointed out, however, that there are a few issues with the quality of the open access status data that have relevance for these calculations. At some organizations, the ”other open access” category may also include a number of articles published in fully open access journals, if the publication channel has not been identified as an open access journal, e.g. if the university has automated the process and has been using the DOAJ list (which doesn’t contain all open access journals) as a guideline. Thus, the increase in the number of publications in this category shouldn’t be interpreted as a direct indication for the amount of hybrid OA. The ”self-archived” category, on the other hand, may also include publications which are still under an embargo and which will not be openly available until later. In the future, the end date of the embargo period will be reported as part of the national data collection, which will make the data more accurate in this respect.

Despite these reservations, it seems that the different routes to open access complement each other surprisingly well. This is particularly evident when looking at the share of open access among the articles published in scholarly journals that the Finnish Publication Forum has ranked at different levels (Figure 5). As most of the open access journals are currently at level one, it is not surprising that the role of these journals in providing open access is paramount at this level. At the higher levels (2–3) there are far fewer open access journals, but thanks to the role of other/hybrid OA and self-archiving, the total share of open access articles is almost identical at all three levels.

Kaikki blogitekstit julkaistaan CC-BY 4.0 -lisenssillä. / All the blog posts are licensed under a CC-BY 4.0 license.