See this in Finnish! 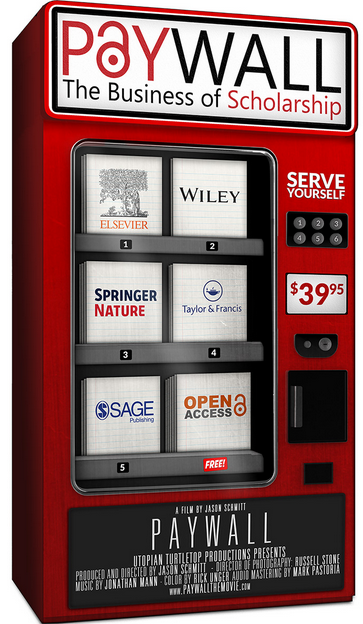 The film, Paywall: The Business of Scholarship, directed by Jason Schmitt, is a document on scientific publishing business and on the need for open science. It reports on the huge profit margins of the big publishing companies, like Elsevier, Springer and Wiley and the challenges for open science to change the situation. Scientists, science administration, librarians, editors of scientific journals, open access-activists, representatives of scientific publishing houses and the founder of Academia.edu give their opinions on the matter. See the trailer!

The film has no subtitles and it lasts for an hour, after which discussion ensues with information specialist Markku Roinila. The film is screened under CC BY 4.0-license.

Be there in time, as there is a limited number of seats available! Some snacks are offered.

The film screening opens the international open access and open science week (from 22nd to 26th October) at the University of Helsinki. The main event of the week is in Science Corner 24th October, starting at 12 pm. You will find the program of the week here: Open Access Week 2018: Designing Equitable Foundations for Open Knowledge.

Kaikki blogitekstit julkaistaan CC-BY 4.0 -lisenssillä. / All the blog posts are licensed under a CC-BY 4.0 license.