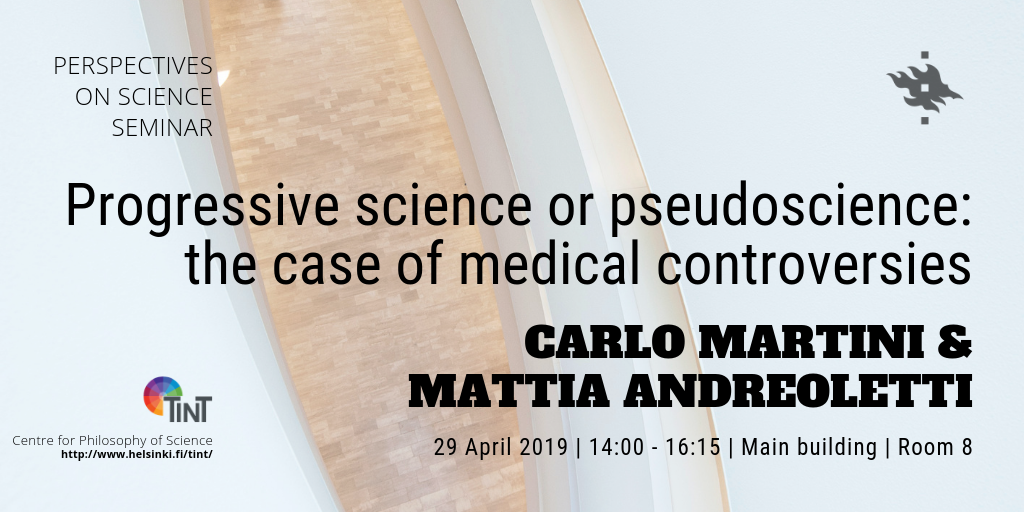 At the next Perspectives on Science seminar (Monday 29.4.) Carlo Martini (San Raffaele/TINT) will present his paper (written jointly with Mattia Andreoletti) entitled “Progressive science or pseudoscience: the case of medical controversies”.

Perspectives on Science is a weekly research seminar which brings together experts from science studies and philosophy of science. It is organized by TINT, the Centre for Philosophy of Social Science at the University of Helsinki.

The first goal of this paper is to elucidate the distinction between ‘pseudo’ and ‘genuine’ scientific controversies. In principle, we could consider a controversy to be genuine if all sides of the debate base their conclusions on adequate data and proper scientific method. But there are at least two issue with this strategy. First, the methodological standards are not fixed once and for all, and it may be hard to discern genuine research in an ongoing debate (Collins and Evans 2002). Secondly, only but a few specialized experts in any given field can recognize whether the data is adequate and the methods have been applied properly, and pseudo-scientific actors are usually well-equipped to present their findings in a way that appears scientific. For those reasons, the status of a controversy is usually decided a-posteriori, once the dust has settled, as it were; but that is of little help for ongoing controversies on which important medical decisions and policies hang.

The second goal of this paper is to provide some epistemic criteria for distinguishing pseudo from genuine scientific debates in medicine. Controversies are quite common in medicine: often new data demonstrate that a commonly-accepted medical practice is not beneficial or even harmful to patients (Prasad et al. 2013). But, unfortunately, medicine is also a scientific field where non-epistemic values (e.g. vested interests) have a huge influence. Indeed, many medical controversies turn out to be“manufactured” and therefore detrimental both for the epistemic landscape and public health (on vaccines see Casiday 2006; Bleecker 2018).

Drawing on the research from social epistemology and the literature on expertise (Shanteau 2002, Collins and Evans 2008, Martini 2014, 2015), we will discuss a series of criteria which have been proposed to identify genuine from pseudo expertise. We will apply such principles to discern between legitimate and pseudo-scientific controversies (see Martini 2018), testing them in a case study.

The case study is based on current research on statins, which are drugs widely prescribed to decrease the level of cholesterol in order to reduce the risk of cardiovascular diseases (CVD). However many are skeptical about their actual efficacy, and claim that Mediterranean diet is a much more effective

intervention to prevent CVD (DuBroff and de Lorgeril 2015). According to the critics, the so-called ‘cholesterol hypothesis’ has been perpetuated by some authors – possibly funded by industry – who have systematically ignored negative evidence (Demasi 2018, Ravnskov et al 2018). We will investigate whether the case of statins can be regarded as a genuine scientific controversy or not.