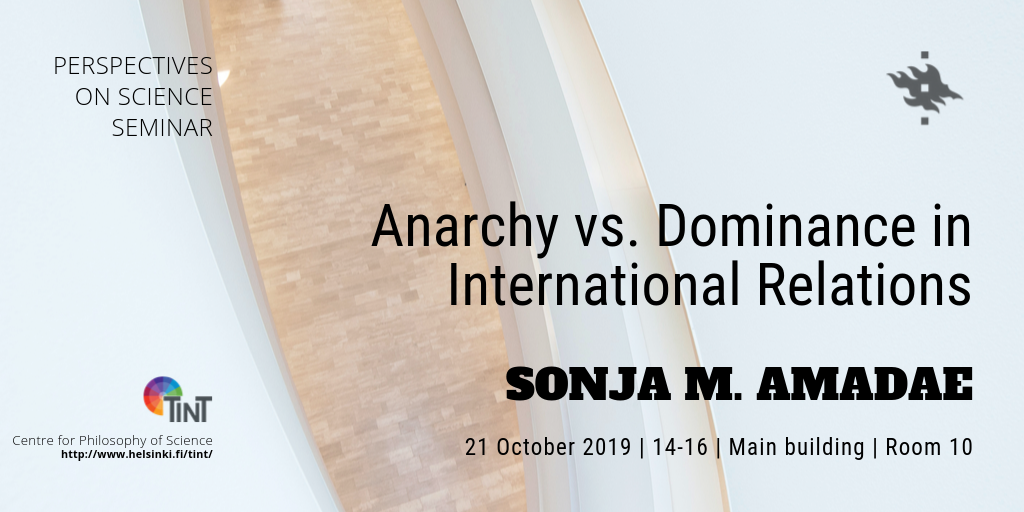 At the next weeks Perspectives on Science -seminar (21.10.) S. M. Amadae (TINT) will present her paper “Anarchy vs. Dominance in International Relations”.

S. M. Amadae is currently a university lecturer and acting professor in politics at the University of Helsinki, and was awarded a 2019-20 Berggruen Fellow at the Center for Advanced Study in the Behavioral Sciences, Stanford University.  Her publications include Prisoners of Reason:  Game Theory and Neoliberal Political Economy (Cambridge University Press, 2016) and the award winning Rationalizing Capitalist Democracy:  Cold War Origins of Rational Choice Liberalism (University of Chicago Press, 2003).  Amadae recently contributed to The Impact of Artificial Intelligence on Strategic Stability and Nuclear Risk  (SIPRI, 2019) from the perspective of reducing existential risk of accidental or inadvertent nuclear war. Amadae is currently and  working on the book project “Neoliberal Seeds of Illberalism:  Nordic Alternatives.”  This research seeks to understand the recent global transition to illiberal hybrid autocratic forms of government and to identify practical interventions consistent with values of participatory governance, a free press, and inclusive economic prosperity. It draws on current research in Finland and the Nordic countries to put forward a non-utopian alternative based on existing practices of democratic governance, free trade, and the welfare state model.

This paper develops relatively unknown research on the Hawk Dove game and the generation of discriminatory conventions to make the argument that the introduction of an arbitrary binary trait can sustain hierarchical relations of domination in international relations (IR).  It uses a simple game theoretic framework that raises the salience of Hawk Dove to an equal footing on par with Prisoners Dilemma.  Within the context of IR theory, wherein Prisoner’s Dilemma arguments are the standard basis for analyzing anarchy, realizing the significance of Hawk Dove encounters offers a means to perceive how systematic relations of domination, such as between colonizing and colonized powers, may be understood.  This paper proceeds by showing how micro-relations among actors, even at the level of individuals within nations, may contribute to systematic structural relations at the macro-level among nation states.  Thus this approach possibly provides an explanation for the intuitively plausible observation that relations of domination are as structurally important as relations of anarchy in IR.  Counter to many uses of game theory by the realist, neorealist, and neoliberal schools of IR theory, the paper identifies two sites in which socially constructed properties of the world can play important causal roles.  The first is in enforcing arbitrary binary identifying characteristics as a means to perpetuate systematic dominance relations.  The second is that actors may voluntarily opt out of seeking dominance by playing alternative strategies that are not Nash equilibria.