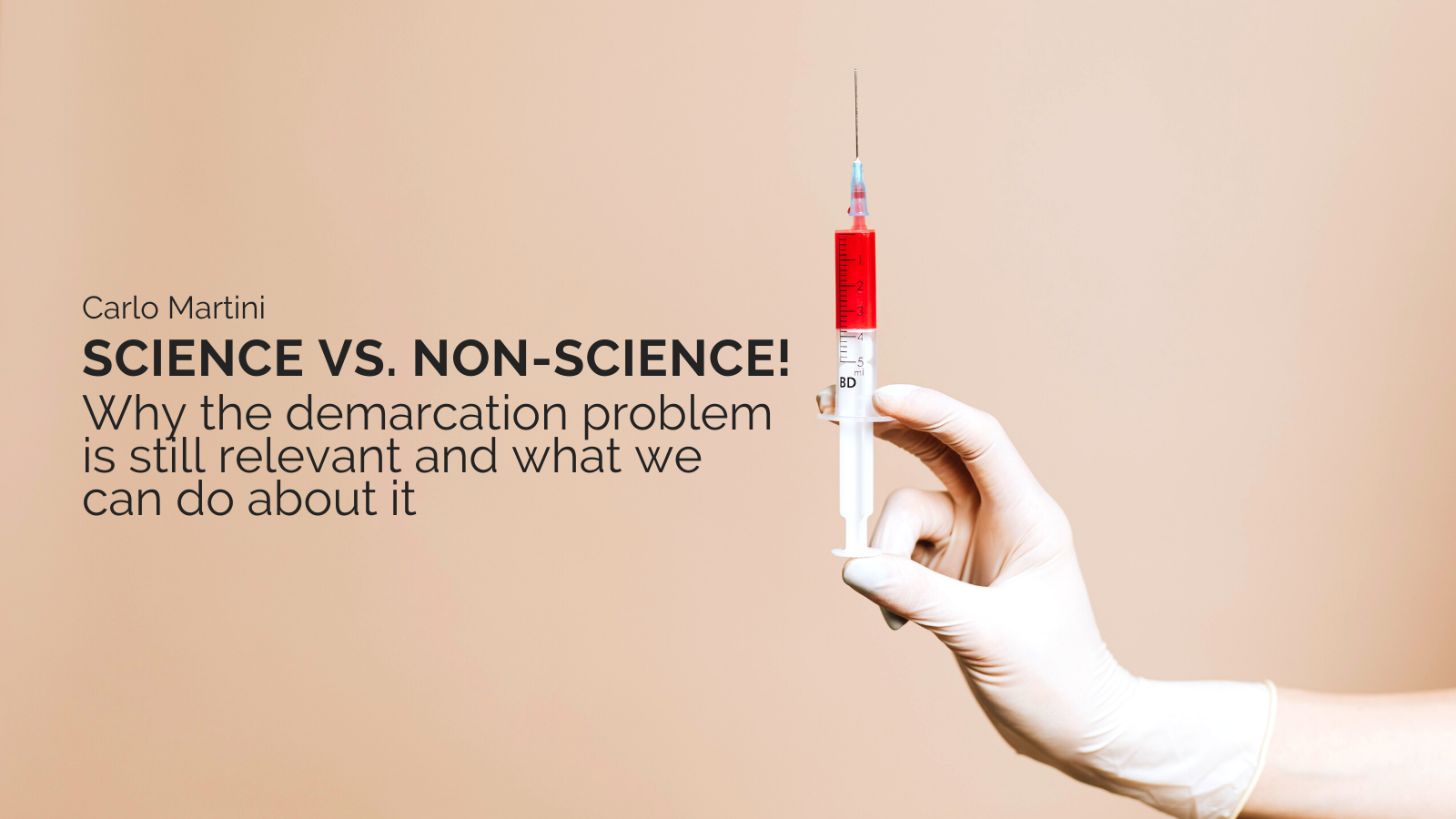 What separates science from pseudoscience? In this post, Carlo Martini takes a fresh look at the familiar but largely forgotten problem of demarcation. He argues that demarcation is still a relevant problem, as scientific misinformation continues to plague public debates on topics such as global warming, vaccines, and more recently, the COVID-19 pandemic.

I will start this post by mentioning a problem which I think has gone largely forgotten in recent decades: the problem of demarcation. The logical positivists, as well as some if their critics, made sure that the unrealisable criteria on how to demarcate science from pseudoscience would never bear fruit outside the doors of academic discourse. Their suggestions were so detached from the concrete working of scientific research that it didn’t take long before Kuhn sealed the coffin on the problem of demarcation by showing how much scientific progress, and the justification of theories, depend crucially not only on logic and rationality, but also on history and sociology.

Kuhn’s work on the social dimension of science was a turning point, and in current discourse the problem of demarcation is rarely mentioned. While the logical positivist program faded, the approach did not. The variety of questions that a large majority of analytically oriented philosophers of science pursue nowadays are not unlike those pursued by the program of logical positivism; we could call it a rationalist program. The goal these days is not to understand the rationality of science in its general form, but rather to pursue smaller and more localised questions about the rationality of several aspects of scientific inquiry. Looking at the past few decades, we can highlight a few of the hot topics pursued in philosophy of science: the logic of scientific explanation, the attempt to understand and capture the essence of scientific models, and the logic of causation. All of the former philosophical queries are sometimes framed in general terms and other times focused on specific disciplines or disciplinary groups (e.g. the social sciences).

While the research questions around the difference between science and pseudoscience have been neglected, the basic problem has not lost its relevance. To be sure, I am not questioning the reasons for neglect: The tools and approaches of those who made the problem of demarcation central to their philosophy of science were rightfully shown to be inadequate; those were the rationalists’ tools. But the basic problem of demarcation has not disappeared because science has still a dangerous enemy in pseudoscience. We find pseudoscience in most of the current public debates on scientifically relevant topics: global warming denialism is backed by pseudoscience, as well as mass extinction denialism, vaccine scepticism and homeopathy—to name just a few.

The most recent wave of pseudoscience came in the wake of the COVID-19 pandemic. Misinformation about COVID-19 received its own name: an infodemic. Nevertheless, some terminological clarification is needed. Scientific misinformation is not the same as fake news. Fake news are often groundless, fabricated out of thin air. But the claim that smoking isn’t harmful to your lungs, or that the climate isn’t warming due to anthropogenic carbon emissions, or that the MMR vaccine causes autism aren’t built on thin air. They are instead grounded on pseudoscience, that is, written and spoken words that have all the trappings of scientific work but do not follow the same genesis. To exemplify, if the average Joe, or Josephine, posts on their social media account the information that common household fans cause death by suffocation, it’s most likely fake news, possibly a product of lunatic conspiracy theories. If instead, Joe or Josephine put on a doctor’s coat, while spreading false claims, then that becomes scientific misinformation. Similarly, if you write on the local church’s monthly newsletter that aluminum adjuvants are toxic, it’s fake news. But if you publish that in an edited volume with Wiley Blackwell, then it’s scientific misinformation.

Scientific misinformation is dangerous. More dangerous than fake news. There are currently many attempts to teach people how to be alert about fake news, and how to be able to distinguish them from corroborated news. Yet, pseudoscience is much harder to detect, and even harder to debunk, and debunking pseudoscience ought to be the goal of a demarcation program in philosophy of science. Scientists, like doctors or physicists, are generally trusted, so anyone who wears their clothes, as it were, and present themselves as an expert, immediately gains a voucher of trust. Pseudoscientists usually have well-honed technical skills and domain knowledge, which allows them to speak and present their ideas as well as, or even better, than a scientist. A pseudoscientist is often what Collins and Evans call an interactional expert¹, that is, someone who can interact and understand the underlying science. Pseudoscientists, at least in genuine cases of pseudoscientific debates, uphold their positions in disagreement with the community-accepted scientific consensus, and they may do so for ideological, economic, or political reasons.

An illustration of pseudoscience is the case of Patrick Moore, who has published several scientific-looking reports about the benefits of additional CO2 for the earth’s biomass. Moore, an unknown figure in official scientific circles, even though he often speaks in the role of an expert on environmental matters, presents himself as co-founder of Greenpeace and has even been cited by the current US president as a reputable source of information². Looking at the some of the reports that Moore had written won’t help much: they are technical and detailed, supported by figures, charts and numbers, as we mentioned above, all the trappings of genuine science. The language and manner of presentation help Moore’s arguments gain traction in audiences that only need a bit of (pseudo)evidence to convince their preconceived views.

Moore is widely discredited among the members of the scientific community. A team of experts could dig into the technicalities of Moore’s reports and find out why they don’t stand up to scientific scrutiny in terms of methodology, but those methodological criteria are not available to the non-experts. How can we demarcate between science and pseudoscience in a way that is actually helpful to a person with average education in recognising the difference? Simple logical criteria, such as Karl Popper’s criterion of falsifiability, are too general to be helpful; and complex methodological arguments, for example about the correct way of establishing causation, won’t be of use to the non-initiated.

It turns out that it is a different kind of criteria that can help distinguish between science and pseudoscience. For example, Kuhn highlighted how important the scientific community is for the advancement of scientific disciplines. It turns out that most pseudoscientists work without the boundaries of the relevant professional communities. This alone is not a reason for disqualification, but it’s certainly a red flag if we have to decide whether a source if trustworthy or not.

Helen Longino developed a concept of objectivity that might be helpful because it does not need the oversimplifications of the Standard View. According to her, the objectivity of a scientific output can be determined by examining the scientific practices that produced that output. Scientific claims are products of a virtuous scientific practices, such as the process of transformative interrogation. In transformative interrogation, scientists are scrutinized by their peers for their claims, often harshly, and are required to defend their positions against the community’s queries. One of the avenues where transformative interrogation happens is the process of peer review, which, albeit imperfectly, helps rule out the most outrageously unsupported claims. It turns out that pseudoscientists do not engage in these virtuous scientific practices. For example, much of pseudoscience bypasses the process of peer-review, either by relying on predatory journals, or by using nonacademic venues, like think tanks, for the dissemination of information.

The question of demarcation is still alive and kicking. We need criteria to debunk pseudoscience, or, at the very least, to flag suspicious sources of information that pretend to be scientific without credits. The good news is that one does not always need domain specific knowledge (of the specialist’s kind) to debunk suspicious claims. We can rely on other criteria for identifying legitimate and suspicious scientific sources. For instance, one can ask whether a certain output is the product of the legitimate scientific community, or not. Of course, it is not always easy to identify the boundaries of the scientific community, but, again, some sources are clearly in, while some are clear outliers. Thus, this will help in identifying large portion of pseudoscience. One can also ask whether the output that purports to be scientific has gone through peer review. If it hasn’t, we should ask why and flag it as suspicious. If it has, it is a good sign, but no proof of scientificity: a deeper investigation will be needed. These are only two of several possible criteria that we can use.³