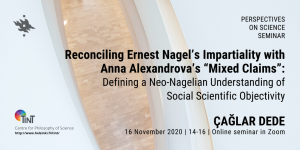 At the Perspectives on Science seminar on Monday 16.11., Çağlar Dede (EIPE, Erasmus Uni.) will give a presentation titled “Reconciling Ernest Nagel’s Impartiality with Anna Alexandrova’s “Mixed Claims”: Defining a Neo-Nagelian Understanding of Social Scientific Objectivity”. The seminar takes place in Zoom from 2 to 4 pm.

To join the seminar please contact tatu.nuotio@helsinki.fi. Information about using Zoom can be found here.

Çağlar Dede’s work focuses on the social dimensions of science and scientific reasoning, values and objectivity in science, and science-society relations. His doctoral research (based in EIPE, Erasmus University Rotterdam) has been on the justifiability of behavioral policy interventions from the perspective of philosophy of (policy-relevant) sciences, which he expects to defend in early-2021. He has recently become a member of the ERC-funded project “Social Epistemology of Argumentation” (based in Vrije University Amsterdam). In this project, he will investigate the cases from scientific practice to inform our scientifically informed understanding of how argumentation (between diverse epistemic groups) facilitates epistemic improvement. Çağlar’s most recent article (Integrating Heather Douglas’ Framework with an Account of Scientific Evidence: Why and How?) is forthcoming in the November-December issue of Perspectives on Science.

In this talk, I argue that Alexandrova’s disagreement with Nagel’s treatment of the mixed claims is less stark than it may initially look, and the respective accounts of social scientific objectivity have several important conceptual commonalities. To make this point, I introduce a distinction between the authority problem of values and the legitimacy problem of values in scientific judgment, and I employ this distinction to characterize the main point where Alexandrova disagrees with Nagel. It turns out that Alexandrova’s main argument against Nagel’s treatment of mixed claims is about the authority problem of values, which is concerned with the proper source and the authorization of relevant value judgments. I then show that Alexandrova’s account of objectivity for mixed claims is compatible with a Nagelian response to the legitimacy problems of values, which emphasizes the role of impartiality in fulfilling objectivity. Moreover, I draw on the insights from the contemporary philosophers in the feminist tradition in analytical philosophy of science to demonstrate that a Neo-Nagelian understanding of social and behavioral scientific objectivity can also accommodate Alexandrova’s compelling worries regarding the authority problem of values. Specifically, I show that the Neo-Nagelian accounts (such as Heather Douglas’ or Elizabeth Andersons’s) are congruent with social scientists’ ownership of appraising value judgments. Moreover, the Neo-Nagelian conception of impartiality, which presupposes the pluralist conception of objectivity (e.g., Douglas 2004, 2011), can properly address the important practical issues raised by Alexandrova regarding the authority problem of values such as the problems of imposition or lack of democratic procedures. I will refer to the practice of evidence-based behavioral policy evaluation to illustrate the conceptual points made during the talk.