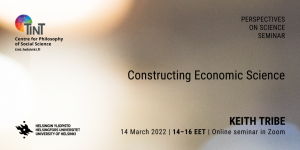 At the next Perspectives on Science seminar on Monday 14.3., Keith Tribe (Tartu University) will give a presentation titled “Constructing Economic Science”. The seminar takes place in Zoom from 14:15 to 15:45.

“My new book Constructing Economic Science traces the transition of political economy from a form of public knowledge and political counsel into an academic science, mastery of which required systematic training. While the first three-year degree in economics was created in Cambridge in 1903, this was an inflection of an international argument for the development of commercial education, in Britain strongly represented in Manchester and then later by the LSE. The appointment of Robbins, who was hostile to commercial education, to a chair in economics at the LSE in 1929 fostered the creation of a replicable economics curriculum that structured the major British textbooks to the end of the century. But there was little interest in the UK outside school, college and university for graduates in economics. In general, British university education in the humanities and social sciences stalled in mid-century at the level of undergraduate education chiefly for lack of labour market demand for graduates, while in the United States graduate training developed strongly from the 1940s.

My presentation will first outline the “standard story” of the history of economics, which emphasises theoretical development, and suggest instead that an emphasis on teaching and the labour market provides a more promising line of analysis. I show how a “discipline” is the construct of academic institutions, rather than a process of progressive theoretical refinement.”

“Originally with a degree in sociology from the University of Essex in 1971, I did my postgraduate work from 1972 to 1975 at Cambridge, and my post-doctoral studies in Heidelberg and Göttingen 1979-1985. I was initially employed at the University of Keele to teach sociology, then in 1984 switched to the Department of Economics, retiring as Reader in Economics in 2002. From 2002 to 2013 I worked as a part-time rowing coach at King’s School
Worcester and as a professional translator, also from 2005 teaching on the third year History of Economic Thought course at the University of Birmingham. I am currently an Associate Professor of History at Tartu University, Estonia.