A new article by Veli-Pekka Tynkkynen was published “Russia’s Nuclear Power and Finland’s Foreign Policy” in the latest issue of Russian Analytical Digest.

It is a widely shared wisdom that energy is a central component in Russia’s foreign policy. The public discussion in Finland of the Fennovoima nuclear power plant, built now by Rosatom, shifted after the onset of the Ukrainian conflict. The insistence by some Finnish political and economic actors that the Russian nuclear power deal has nothing to do with foreign and security policies is worrying, as the measures taken both by the Finnish and Russian actors clearly demonstrate that the nuclear business, in particular, is highly political.

Significant financial and political interests surround the issue of exploiting Arctic areas. For the environment, the risks are monumental.

Finland will be the chair of the Arctic Council for the 2017-19 term. The Council is an international political forum for the Arctic areas.

Aleksanteri Institute’s Professor Veli Pekka Tynkkynen believes that it is in Finland’s interests to ensure continuous cooperation among the parties operating in the Arctic.

The interview is available in English, Finnish, and Swedish here.

More about the workshop series. 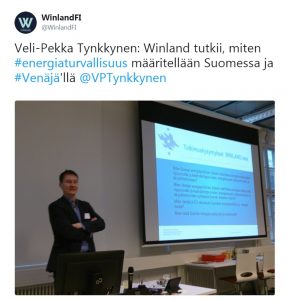