Our group not only produces research, but is also gladly recommending works of other experts to read. In the latest Yliopisto-lehti issue column “Tutkija suosittelee” (Researcher recommends), doctoral student Sakari Höysniemi is talking about Timothy Mitchell’s book “Carbon Democracy. Political Power in the Age of Oil” (Verso Books, 2011). 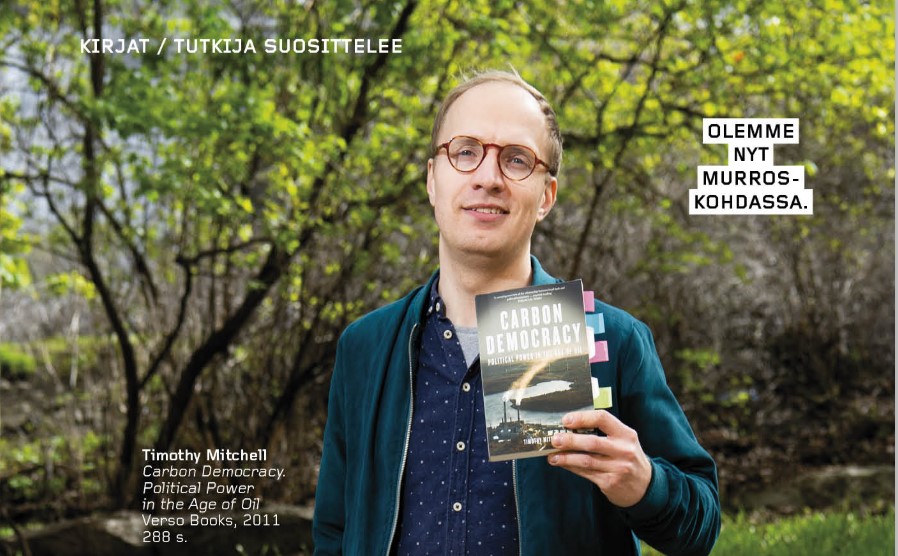 – A lot of things happen to oil before the gasoline niftily comes out at filling station. Carbon Democracy can and should be read, even if you do not know Bruno Latour, Michel Callon and Actor-network theory.

You can read the full issue online.

This paper analyzes how states have negotiated, distributed, and contested responsibilities within the United Nations Framework Convention on Climate Change (UNFCCC).
It applies the English School (ES) theory and argues that climate responsibility constitutes
an emerging primary institution of international society. Due to its rising great power status, China plays an increasingly important role in social processes in which international
society defines and distributes states’ responsibilities, especially those of the great powers,
now and in the future. Therefore, this paper pays particular attention to China’s contribution
to the UNFCCC. Ultimately, the paper offers ES empirical observations about the relationship
between primary and secondary institutions as well as the role of agency in institutional change.

Today starts ASEEES Summer Convention, organised at the University of Zagreb
in Croatia and our postdoctoral researcher Alla Bolotova takes part in it. First, Alla will be participating in the “Social Anthropology of Siberia and the North” roundtable.

The long-respected culture of Russian (and post-SU in general) traditional Siberian ethnography is today in some sense at war with the no-less respected culture of current social anthropology of Siberia. The purpose of the proposed Round Table is to discuss the issue. For this, we plan to present several recent projects in Siberian (“Northern”, Arctic) anthropology in order to show the potential of the region as an anthropological field, and the potential of social anthropology as a key to contemporary life in the region. Participants of the round table will present several case studies based on their current and completed projects in order to stimulate discussion of theoretical and practical relations between the two disciplines.

After that, Alla Bolotova will be a discussant at the “Informal Economics and Social Relations in Siberia” panel, where the researchers from the European University of St. Petersburg will be discussing the following issue:

The transition currently under way in Russia in general and in Siberia/Far North in particular can be described as a slow and difficult transition from a society based on discipline, guilt, and punishment to one based on initiative, law, and responsibility (Alain Ehrenberg). Informal aspects of human relations become extremely important: from ‘informal economics’, including poaching and other semi-legal and illegal activities that helps to compensate for inadequacies of the legal system, to personal relations that play a very important role in compensating for the inadequacies of foods and goods supplies. The panel will explore and discuss the issue on the basis of three social anthropological case studies from different regions of Siberia/Far North.

More information on the conference can be found online.