Today our researchers are taking part at the European Consortium for Political Research General Conference 2016 that is organised in Prague. Daria Gritsenko chairs the panel “Energy Governance in the Eurasian Space: Economics and Materiality”, where Veli-Pekka Tynkkynen presents his paper titled “‘Epiphytes’ of energy infrastructure and Russian energopower”.

The analysis of Gazprom’s activities reveals that the practiced energopower of Gazifikatsiia Rossii derives its power from geographical imaginaries of Russia. This bipartite energopower receives its essence from the positive and negative materialities of hydrocarbons, the ability to do both “good” and “bad”, which unfolds the way the non-human is embedded in the construction of the social. This construction lumps together the material-nationalistic energy imagination, such as Russia as an energy Superpower, with universal goals such as economic growth and modernization, but also with values such as conservative gender roles. More, discursive and coercive governmentality come together in the energopower practiced by Gazprom: via amalgamation of energy, sports and (imagined) national identity the “presence” of the state is made concrete through both gas pipelines and spatially-extensive sport facilities. Gazprom’s gas program advances the Great Power ambitions of Putin’s regime in the name of social “responsibility”, yet the sports-orientated social program aims ultimately to responsibilization of individuals to take care of both the wellbeing of the self and the nation, its economy and military might. The rationalities and practices of gazifikatsiia energopower function in and combine several scales: the subject is tied to territories and the nation via gas and its epiphytes, the subject is made responsible for the biosecurity (reproduction and military might) of the population, and the global is harnessed in legitimizing the reliance on gas.

Comparing Gazprom’s practiced energopower to that of Rosneft’s reveals two fairly similar corporate-responsibility strategies, yet with a distinct focus. Rosneft is a different kind of power figure in the Russian domestic energy scene. Not because it would be less powerful, but because the energy infrastructures it produces and the social epiphytes that are constructed “on” these infrastructures are of a different nature. If Gazprom has chosen to build its power especially via gas distribution, pipeline infrastructure and sports facilities, Rosneft’s specialty is marrying Russian oil with Russian faith, the Orthodox Church. Therefore, if Gazprom’s strategy to promote the “presence” of the state and its grand objectives are made concrete through both gas pipelines and spatially-extensive sport facilities, Rosneft does this via both gasoline service stations and other oil-related infrastructures and social objects. Rosneft’s social investments (in 2012 appr. 85 M€) are directed to building and renovating schools, kindergartens and health care facilities, thus drawing from the nostalgia people feel towards Soviet era patrimonial welfarism, as well as orthodox churches and chapels that, again, appeal to core values behind national and spiritual awakening Russians have experienced, with the strong back-up of the state and Putin’s regime, during the post-Soviet years.

Listen to the latest Ykkösaamu episode on Yle Areena webpage. In the episode, Veli-Pekka Tynkkynen and senior researcher Harri Mikkola from the Finnish Institute of International Affairs discuss the Arctic region and Russia.

Veli-Pekka’s article “Energy as Power—Gazprom, Gas Infrastructure, and Geo-governmentality in Putin’s Russia” was published in the new issue of Slavic Review.

This study unfolds the normalizing narrative that is constructed via the Gazifikatsiia Rossii promotional video released by Gazprom. The analysis reveals that the practiced geo-governmentality of gazifikatsiia derives its power from geographical imaginaries of Russia. This bipartite energopower and geo-governmentality receives its essence from the positive and negative materialities of hydrocarbons, the ability to do both “good” and “bad”, which unfolds the way the non-human is embedded in the construction of the social. This construction lumps together the material-nationalistic energy imagination, such as Russia as an energy Superpower, with universal goals such as economic growth and modernization, but also with values such as conservative gender roles. The rationalities and practices of gazifikatsiia geo-governmentality function in and combine several scales: the subject is tied to territories and the nation via gas, the subject is made responsible for the biosecurity of the population, and the global is harnessed in legitimizing the reliance on gas.

Sustainability as a corporate governance objective entered the Russian energy sector in the early 2000s. Major state-owned companies began publishing corporate social responsibility and sustainability reports. Instead of examining these documents, though, I want to understand how sustainability is defined in advertisements directed at the broader public at home and abroad. I argue that the narrative of these advertisements better reflects how both companies and viewers understand sustainability. Advertisements, as a central component in branding that can represent how corporations actually think (see Moeran 2005), are a productive site for unmasking how Russian energy, political elites, and beliefs about commerce and responsibility are brought together.

Veli-Pekka Tynkkynen, Daria Gritsenko, and Jussi Huotari from our research team participated in the Russia’s Far North: Contested Energy Frontier symposium at the Slavic-Eurasian Research Center (SRC) at Hokkaido University in Sapporo, Japan on 6th-8th of July. This symposium was organised within the same-titled 3-year cooperation project between Finland and Japan, co-funded by the Academy of Finland and the Japan Society for the Promotion of Science.

Jussi Huotari presented his research “Oil and gas corporations in the Russian Arctic: Environment liability vs social responsibility?” at the young researcher’s seminar. Daria Gritsenko gave a talk on the topic of “The Structuration Approach to Arctic Seaport Development: The Case of Sabetta”  and the session “The New Northeast Passage: Nature, Shipping and Trade in North Asia” of the main symposium, Veli-Pekka was one of the discussants at the session. Later he presented the paper “Greening Regional Energy Policies in the Russian Arctic? Encountering State Energopower in Archangelsk and Karelia” at the session “Selling the Arctic: The Uneasy Coexistence of Business Ventures and Environmental Concerns”. 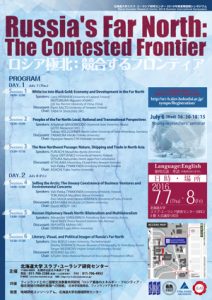 You can find more information about the symposium at the organizers’ webpage.

Baltic Rim Economies Review published in June a special issue on the future of the Arctic. Veli-Pekka Tynkkynen contributed an article “Russia’s Arctic paradoxes” to it. In the article, Professor Tynkkynen discusses the global, the national and the grass-root level paradoxes that Russia faces in the Arctic.

The article and the full volume are available here.

On 18-20 of May a Second Pan-Eurasian Experiment Science Conference took place in Beijing, China. The conference attracted a large number of experts from all over the world, and Professor Veli-Pekka Tynkkynen was one of them. He participated in the session “From Society to Knowledge Transfer and International Collaboration” with a presentation titled “Russian climate policies and local reality”.

Conference programme and information can be found here.

An open access scientific journal, Elementa: Science of the Anthropocene published a new co-authored by Veli-Pekka Tynkkynen article “Arctic air pollution: Challenges and opportunities for the next decade”.

The Arctic is a sentinel of global change. This region is influenced by multiple physical and socio-economic drivers and feedbacks, impacting both the natural and human environment. Air pollution is one such driver that impacts Arctic climate change, ecosystems and health but significant uncertainties still surround quantification of these effects. Arctic air pollution includes harmful trace gases (e.g. tropospheric ozone) and particles (e.g. black carbon, sulphate) and toxic substances (e.g. polycyclic aromatic hydrocarbons) that can be transported to the Arctic from emission sources located far outside the region, or emitted within the Arctic from activities including shipping, power production, and other industrial activities. This paper qualitatively summarizes the complex science issues motivating the creation of a new international initiative, PACES (air Pollution in the Arctic: Climate, Environment and Societies). Approaches for coordinated, international and interdisciplinary research on this topic are described with the goal to improve predictive capability via new understanding about sources, processes, feedbacks and impacts of Arctic air pollution. Overarching research actions are outlined, in which we describe our recommendations for 1) the development of trans-disciplinary approaches combining social and economic research with investigation of the chemical and physical aspects of Arctic air pollution; 2) increasing the quality and quantity of observations in the Arctic using long-term monitoring and intensive field studies, both at the surface and throughout the troposphere; and 3) developing improved predictive capability across a range of spatial and temporal scales.

This Policy Brief presents an executive summary of the recommendations and measures for Finland’s journey toward responsible Arctic development, as identified in the MERMAID-project. The focus is on general issues and business, with a special focus on the maritime cluster and tourism sector. Furthermore, the Policy Brief contains a summary of the future scenarios constructed during the project. The consequences of the recommendations, the conditions for successful implementation, and risks have been analysed with respect to these scenarios.
MERMAID is part of the implementation of the 2014 Government plan for analysis, assessment and research.

Read the policy brief in English or in Finnish.