Skip to primary content
What makes a city novel? A what are the distinguished characteristics of this genre? I hope to devote more time and space to this issue in the near future –  I’ve been working with it for some time now. Rather than a fully-fledged analysis, for now, some observations concerning one specific novel: Ian McEwan’s 1998 Amsterdam. 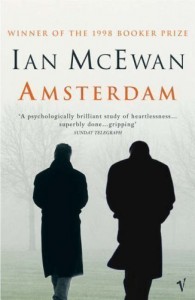 To what extent is Amsterdam a city novel – and does it make sense to approach it from the generic perspective of the city novel? Certainly, it is in a sense a tale of two cities, and like Dickens’s novel, it pits images of the continent with images of Englishness in a tale that is both highly entertaining and complex. London and Amsterdam, then, and the forcefield they emanate – certainly more than mere settings. The eponymous Amsterdam, in particular, to which all the action in the novel is eventually drawn in a series of intriguing doubles, enables and steers the plot development. But it also acts as the mirror image (or even source?) of the protagonists’ rationale of revenge.
Amsterdam, in the following quote, is conveyed as the epitome of rationality – but whose rationality, and to what purposes?
“While he was crossing the bridge it came back to him, what a calm and civilised city Amsterdam was. He took a wide detour westwards in order to stroll along Brouwersgracht. […] So consoling, to have a body of water down the middle of a street. Such a tolerant, open-minded, grown-up sort of place: the beautiful brick and carved timber warehouses converted into tasteful apartments, the modest Van Gogh bridges, the understated street furniture, the intelligent, unstuffy-looking Dutch on their bikes with thier level-headed children sitting behind. Even the shopkeepers looked like professors, the street sweepers like jazz musicians. There was never a city more rationally ordered.” (McEwan 155)
—
Whether or not one wants to approach this novel as (primarily) a city novel, it has, of course, a lot more to offer than spatialized (power) relations.
For a Girardian analysis of the novel, for example, see Hanna Mäkelä’s recent dissertation Narrated Selves and Others (2014) here.