Thrilling! The Cambridge Companion to the City in Literature is out in October. Can’t wait to get my hands on the volume. 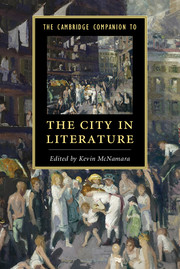 And hard to believe – since the book can not be bought yet, only pre-ordered – it is already on GoogleBooks?!

With articles on “The city in the Literature of Antiquity”, a contribution by Bart Keunen and Luc de Droogh on “The Socioeconomic Outsider”, texts on the Urban Sublime, the City of Modernism, Urban Dystopias, Urban Pastoral, and much, much more.

“What is a city? The question is foundational in a double sense: it is a question about the origins of social and political life, and it is also a question that haunts the very beginnings of the western tradition of thinking about the nature and goals of collective life.” (Balasopoulos 2014: 17)

The city, the literature it has spawned, and the thinking on the human condition and its social and political underpinnigs, have been firmly entwined since time immemorial, as this volume once more illustrates. Which brings me back to what I wrote in this book:

“Within Western history, the city has been a potent image for as long as written literature has existed. From the very first preserved texts, one can find city images in all their ambiguous complexity: as nodes of creative and destructive energy, as beacons of utopian possibility and of moral warning. As Burton Pike points out, “[w]e unthinkingly consider this phenomenon modern, but it goes back to early epic and mythic thought. We cannot imagine Gilgamesh, the Bible, the Iliad, or the Aeneid, without their cities, which contain so much of their energy and radiate so much of their meaning” (Pike 1981: 3). In the forms of the metropolis and the capital, in particular, the city has become a powerful artefact of the human cultural imagination, endowed with complex powers of representation, and evoking a plethora of images. In the history of the novel, cities have played a particularly crucial role (Bradbury 1976/1986: 99), and the development of literary movements such as realism, naturalism, symbolism and modernism is intimately intertwined with the history of the cities that helped shape them (see Bradbury 1976/1986; Williams 1985; Wilson 1995: 153; Hirsh 2004; Brooks 2005: 131).” (Ameel 2013: 35 / Ameel 2014: 17)