“Literature and the Peripheral City”, editors Lieven Ameel, Jason Finch, and Markku Salmela, has been published! More at Palgrave’s own website, here: 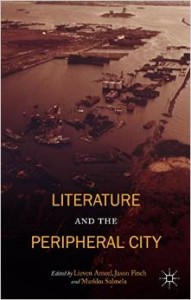 “Cities have always been defined by their centrality. But literature demonstrates that their diverse peripheries define them, too: from suburbs to slums, rubbish dumps to nightclubs and entire failed cities. The essays in this collection explore urban peripheries through readings of literature from four continents, taking the reader on a journey from global urban hubs such as London and New York to Nordic capitals and cities like Santiago and Johannesburg. The book shows powerfully that peripheral areas are essential to bo th urban fiction and the identities of cities. The urban experience keeps feeding on images from the margins and hinterlands, which help cities and their parts define themselves. Without peripheries there would be no centres.”

An inspiring, two-year project is drawing to a close. Heart-felt thanks to all contributors, to everyone at Palgrave, and to my terrific co-editors!

PART I: CITY PERIPHERIES
1. Detroit and Paris, Paris as Detroit; Jeremy Tambling
2. ‘It’s Six A.M. Do You Know Where You Are?’ Urban Peripherality and the Narrative Framing of Literary Beginnings; Lieven Ameel
3. The Peripheries of London Slumland in George Gissing and Alexander Baron; Jason Finch
4. A Topography of Refuse: Waste, the Suburb, and Pynchon’s ‘Low-lands’; Markku Salmela
5. London’s East End in Peter Ackroyd’s Dan Leno and the Limehouse Golem; Aleksejs Taube
6. The Configuration of Boundaries and Peripheries in Johannesburg as Represented in Selected Works by Ivan Vladislavic and Zakes Mda; Marita Wenzel