Out now with Palgrave: Literary Second Cities (editors Jason Finch, Lieven Ameel and Markku Salmela). The volume grew out of the conference by the same name, organized at Åbo Akademi/Turku in 2015.

This book brings together geographers and literary scholars in a series of engagements near the boundaries of their disciplines. In urban studies, disproportionate attention has been given to a small set of privileged ‘first’ cities. This volume problematizes the dominance of such alpha cities, offering a wide perspective on ‘second cities’ and their literature. The volume is divided into three themed sections. ‘In the Shadow of the Alpha City’ problematizes the image of cities defined by their function and size, bringing out the contradictions and contestations inherent in cultural productions of second cities, including Birmingham and Bristol in the UK, Las Vegas in the USA, and Tartu in Estonia. ‘Frontier Second Cities’ pays attention to the multiple and trans-national pasts of second cities which occupy border zones, with a focus on Narva, in Estonia, and Turkish/Kurdish Diyarbakir. The final section, ‘The Diffuse Second City’, examines networks the diffuse secondary city made up of interlinked small cities, suburban sprawl and urban overspill, with literary case studies from Italy, Sweden, and Finland.

Reviews:
“Setting ‘second’ cities first, this is an impressive and timely reminder that complex literary cultures exist in many locations beyond more familiar metropolitan capitals. In a set of exciting interdisciplinary essays Literary Second Cities reminds us of the distinctive character of urban life as conceptualised by writers exploring cities such as Birmingham, Las Vegas, or Narva. This volume is thus a brilliant and original addition to the growing body of work on urban literary studies.” (Professor Andrew Thacker, Department of English, Nottingham Trent University)

“Urban literary studies has understandably focused attention on certain major, global cities — London, Paris, New York, Tokyo — haut lieux that dominate the spatial imagination. But what of the second cities, smaller, less revered, but perhaps more representative of urban life in the twentieth and twenty-first centuries? The essays in Literary Second Cities address this blind spot by analysing the distinctive space and character of these ’secondary’ places. This is a vital and necessary collection.” (Professor Robert T. Tally Jr., Department of English, Texas State University)

”In urban studies, the notion of the “secondary city” has gradually come to prominence during the last decades of the twentieth century, especially in the study of cities in the developing world. Quantifiable factors have featured prominently in their definition and, following Kingsley Davis’s classification of Class II cities, some researchers have focused on population, in particular (typically 100,000 to 500,000), to define secondary cities (see Tan 13). While Davis’s classification from the 1960s is still applied, it is useful to note that more recent quantifying definitions label secondary cities as having populations between 500,000 and three million inhabitants (Brillembourg and Klumpner). Quantifiable factors, then, would seem to become fast outdated, offering only the crudest of methodological frameworks. In more recent studies, secondary cities have become increasingly defined in terms of their function, their relationships with metropolitan and other urban centres, as well as in terms of the specific kinds of urban experiences they enable. Still, when defined in relation to other cities, secondary cities tend to be understood, first of all, for what they are not—in relation to a “first” city (such as a capital or other clearly economically/culturally dominant city in a national or international context)‚ that is.

As more recent qualifications in urban studies testify, secondary cities are not only to be defined by their size or dependent relationship to a metropolis, but by their specific functions. Thus Brian Roberts and Rene Peter Hohmann, in a study supported by the United Nations Human Settlements Project UN-Habitat, define what they call “secondary cities” as “urban jurisdictions performing vital governance, logistical, and production functions at a sub-national or sub-metropolitan region level within a system of cities in a country” (3). Secondary cities may be specialized-function cities or draw their specific characteristics “on the basis of their urban function as focal centers of cultural, political, and ritual networking” (K. Hall 12). The function of a single city within a network of cities is understood not only as dependency vis-à-vis the metropolis. Even more important is a network of other secondary cities and urban centres, which “distinguishes secondary cities from the metropolitan centres” (K. Hall 3). In globalizing times, second cities are sometimes able to bypass “first” cities in the way they come to form networks of cities (as argued in Bart Keunen’s contribution to this volume). Ultimately, secondary cities are also set apart from the metropolis and smaller urban settlements by the kinds of experiences they evoke.

To illustrate how second cities produce specific kinds of urban experience, one can look at what Simon Parker calls the “‘the Four Cs’ of the urban experience—culture, consumption, conflict and community” (4). All these express themselves continuously in urban dwellers’ everyday lives. For example, the fact that second cities rarely have architecture associated with political leadership on the national level—parliamentary buildings, ministries, residences of heads of state—frees central areas for other functions and can be a fundamental factor shaping these cities’ public space in comparison with the capital cities of the countries in question. Furthermore, the same industries and resources that have often historically shaped second cities also facilitate specific ideological currents, consumption patterns, and ways of communicating, all discernible as particular “structures of feeling.” For Raymond Williams (Marxism 130–34) this concept was to be defined temporally, as characteristic of a given period or generation, but a spatial application based on contrasts between places seems equally useful. Although such city-specific structures may resist precise empirical description, they create, in relation to other cities, experiential worlds not reducible to stereotypical representation.

Recent urban studies have highlighted the importance of research into secondary cities, drawing, again, on both quantifiable and experiential arguments. More than 40 per cent of the world’s population is expected to live in secondary cities by the middle of the twenty-first century (Roberts 40), and various studies have argued that secondary cities may well be more competitive in economic terms and more desirable as living environments than the megacities which remain dominant in the literature on cities (see, e.g., Kresl and Ietri, Notteboom et al.). If secondary cities, mid-size cities and “second tier cities” have become increasingly foregrounded in urban studies as warranting a distinctive treatment (see, e.g., K. Hall; Markusen et al.), this also has relevance for literary urban studies, long preoccupied with narratives of the metropolitan urban condition (see Simmel; Wirth; Williams, Politics). From local urban service centres or specialized cities to networks of smaller cities, the notion of the secondary in relation to literary urban studies is a rich field demanding more attention from scholars.” (Finch, Ameel & Salmela 6-8)

Part I Defining the Second City

Part II In the Shadow of the Alpha City

“This one-day conference proposes yet another angle that can possibly inject fresh perspectives to discourses about the city. What if we factor in the humanities? Here, we invite policymakers, academics, scientists, engineers and curious city dwellers to think with us how humanities disciplines such as philosophy, literature, history, art, cultural studies, and others can play a role in the constitution as well as the development of a city. Our conference will attempt to rise to that challenge by engaging with international speakers and Singapore-based researchers.” 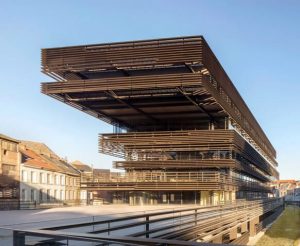 I’m participating on 1 December in a workshop by NARMESH (“narrating the mesh”) on Describing Nonhuman Spaces. Great to be back at my Alma Mater – Ghent University – for a discussion on experiences of nonhuman space in literature, organized by Marco Caracciolo.