Welcome to the SELMA seminar “INTERSECTIONS OF NARRATIVE STUDIES AND URBAN STUDIES”, where I will present ongoing research projects together with Jason Finch, with whom we’ve had a number of inspiring collaborations in the field of literary urban studies so far.

I’ll present my new research project, Jason will be speaking of mediations and representations of mass housing. 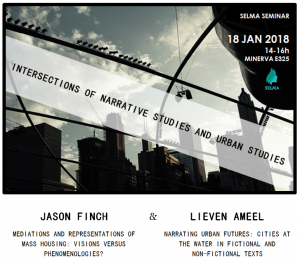 A vital dimension of contemporary literary studies is increased engagement with real-world issues such as social policy and planning. Practitioners including urban historians and policy-makers gain understanding of aspects of human experience not readily available otherwise in collaboration with literary scholars. Also, techniques originating in literary studies can be used productively to read texts not conventionally labelled literary, including municipal plans and oral histories preserved in archives. On 18 January, SELMA presents two speakers with links to the Centre who work in this interdisciplinary area, and on the frontier dividing academic and extra-academic social analysis. Lieven Ameel and Jason Finch are founder members of the Association for Literary Urban Studies (ALUS), the most recent international conference of which was ‘(Im)Possible Cities’ (University of Tampere, 2017). They have jointly edited two volumes arising from the work of the Association and are editors of the Palgrave series Literary Urban Studies (http://www.springer.com/series/15888).