Speaking today (22.8.18) at Aboagora on Palimpsest Cities and the concept of burden in city literature.
Many thanks to Silja Laine and everyone at Aboagora for putting together our session and the rest of the excellent program!

I will be speaking a bit about commodity fetishism, the city as juggernaut, and the possibility of redemption in city literature, from The Great Gatsby to Riku Korhonen’s Kahden ja yhden yön tarinoita. Most of our session will be an open discussion with Jason Finch from Åbo Akademi, the Estonian author Jan Kaus, and myself.
I had the honour to meet Jan Kaus during an Association for Literary Urban Studies symposium in Tallinn – Jan Kaus is not only an inspiring literary author, he also has the rare gift to speak both eloquently and poetically about his own literary work and its relationship to cities.

Every city carries the traces of its multiple pasts. Some of these are present on the surface in ruins or historic buildings which are visited by tourists. Some are hidden beneath newer buildings or revised road layouts. In this session two scholars of urban literature meet a creative writer preoccupied with his native city to discuss various aspects of burden and possibility in urban place. We approach the theme of this year’s Aboagora through the concept of palimpsest.
Originating in manuscript studies, the word palimpsest has a primary sense defined by the Oxford English Dictionary as ‘a parchment or other writing surface on which the original text has been effaced or partially erased, and then overwritten by another; a manuscript in which later writing has been superimposed on earlier (effaced) writing’. In extended use, palimpsest means something ‘reused or altered while still retaining traces of its earlier form; a multilayered record’. In common with other writers and researchers, we see cities as sites containing many layers and retaining aspects of ‘earlier form’: as palimpsests.
The urban past contains multiple types of burden and possibility and we will introduce literary explorations of specific examples: Tallinn, Turku, and New York. The burden of the urban past can include the effort to comprehend past injustices or crimes, and acts that now seem shameful or unacceptable. The possibility this contains is a new ‘multilayered’ history that can include elements of conflict or radical change.

Ever since I began to be interested in the narrative structures in planning, I have been quoting, teaching, and using the work of James A. Throgmorton. Throgmorton’s texts on planning as a form of persuasive storytelling are still some of the most accessible and lucid reflections on the fundamentally narrative features of planning – and they remain part of the foundation of any narrative theory of planning. 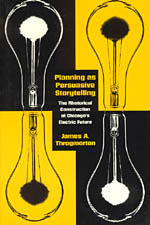 So I’m understandably exited to participate in the event “Contested Planning, Persuasive Storytelling”, with James A. Throgmorton, in Helsinki, 15.8. The event is organized by the Academy project SCENSLECO – “Strategic spatial planning with momentum gaining scenario storytelling: legitimacy contested?”, with ao. colleagues from the time when I was a visiting researcher at the YTK Land Use Planning and Urban Studies Group at Aalto University.

I will present on metaphors in the planning of the New York waterfront, and in particular on how metaphorizations from The Great Gatsby have had a continuous influence on thinking of New York’s development. 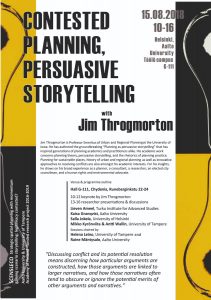 More on my current research here – and on my publications here.

Presenting today at the “Big Data and Urban Governance on the Margins of the City” workshop at King’s College, London. The workshop is part of a two-day kick-off of smart city / urban futures research projects. My presentation, “Metaphor into Matter: Examining City Futures in Literary Urban Studies”, looks at the use of metaphor in urban planning and policy. The aim is to use metaphor analysis to unpack rhetorical strategies in planning, and to bring into focus competing planning visions. I also argue that metaphor analysis can be applied not only an instrument for critical analysis, but also as tool for planning. There is considerable potential for a more conscious inclusion of metaphorizations of personal and communal relations to urban environments in PPGIS. Metaphor, and more broadly concepts from literary and narrative studies, can play a role in moving from quantitative “smart” technologies to more qualitative approaches.

I will examine the development of the Kalasatama district in Helsinki, with specific reference to Kalasatama’s smart city aspirations.

Many thanks to Ayona Datta and everyone at the research project for inviting me to participate! 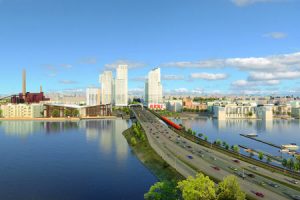 I’m drawing in part on some earlier published work: