Excited to see the appearance of the first article of the New York City part of my research project on future narratives of cities at the water. This new article, published with Critique: Studies in Contemporary Fiction, examines Foer’s story of the Sixth Borough in view of other metaphors of the New York waterfront, and with reference to the comprehensive waterfront plan Vision 2020, in particular.

In my research more broadly, I examine metaphorizations and future narratives of the urban waterfront across disciplines, with cross-readings of planning, policy, and literary texts.  A number of articles on the Helsinki waterfront in literature have also been published so far, with a few forthcoming. One study I also look particularly forward to seeing published soon is an article forthcoming with Textual Practice in which I look at Vision 2020 in connection with Kim Stanley Robinson’s New York 2140, and drawing on Carl Schmitt’s concept of nomos and Deleuze & Guattari’s smooth and striated space. 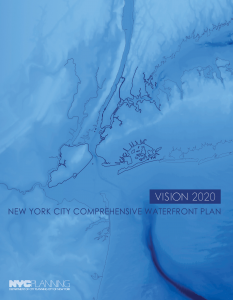 In visions of future New York City, the waterfront appears as a highly symbolic space, a site of possibility and transformation, imbued with complex cultural meanings. Crucial for the understanding of the urban waterfront and its development are the metaphors used to describe changing relationships to it, across genres. This article focuses on one specific metaphorization of the watery edge of New York City, that of the “Sixth Borough.” It examines the 2011 New York comprehensive waterfront plan Vision 2020 and Jonathan Safran Foer’s short story “The Sixth Borough,” part of the novel Extremely Loud & Incredibly Close, but published as a separate short story in the New York Times (2004, 2005). Read side by side, these texts offer a compelling—if contradictory—view of how the words to describe the city engage with eruptions in the material world.

Thanks to everyone at last week’s “Water, Animals, and Arctic Climate Change” conference in Joensuu, 12-13 December 2018 (pdf programme here). Special thanks to Markku Lehtimäki and Arja Rosenholm of the Changing Environment of the North project, all the organizers at Joensuu, and Scott Slovic for an inspiring keynote and feedback on the presentations.

In this presentation, I will explore the trope of the balloon explorer in Kim Stanley Robinson’s New York 2140 (2017), with a specific reference to Carl Schmitt’s idea of nomos (as proposed in The Nomos of the Earth (1950/2003), and drawing on the idea of visual agency. How does the balloon paronama, and the panoramic visual agency over the Arctic expanse tie in with the process of appropriation, distribution, and production involved in the construction of a nomos of the arctic? What kinds of mastery, and epistemological order, does the balloon panorama attempt? I will focus on Robinson’s futuristic novel, but will also draw on Philip Pullmans’s His Dark Materials, and Thomas Pynchon’s Against the Day, literary texts that utilize complex strategies of imaginative worldmaking that involve arctic balloon exploration as a way of assessing new kinds of knowledge of humans’ relationships to their environment, but also as means of territorial and epistemological control.

The Croatian island of Vis, and the fishers’ village of Komiza, are a thoroughly inspiring setting for a conference on wavescapes in literature and culture. As always, experiences of space are in part already mediated by contact with earlier stories – so a few (admittedly random, and entirely personal) thoughts on my earlier, non-bodily encounters with Vis:

I was introduced to the island of Vis as a child overhearing talk of my grandmother’s brother’s exploits during the Second World War. The family had escaped Ostend to England at the beginning of the war and my great-uncle Pierre Beauprez had enlisted in the British army, in what would become the legendary no. 10 inter-allied commando of the SAS forces, consisting of soldiers that had fled occupied Europe. 3rd troop of 10 i-a commando would form the loose inspiration for Tarantino’s movie Inglorious Bastards. 4th troop was the Belgian troop, and saw Pierre Beauprez in action in ao. Italy, Walcheren, and Vis. He would survive the war, later enlist in the Korean war, where he died in action in 1951. 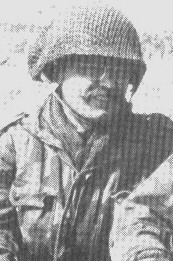 And it was again the events of war that brought me in contact with Vis later – this time the 1930 and 1940s memoirs of Fitzroy Maclean Eastern Approaches. Maclean, who acted at one point as British liaison officer with Tito’s partisans, describes the idyllic environments of the island being leveled by the Allied forces to make way for air bases to support the partisans. In fact I always found the most gripping parts of Maclean’s book the chapters that deal with his time in Russia, in particular his first-hand witnessing of Stalin’s purges and his explorations of Central Asia, which conveyed an urgent desire to “take the golden road to Samarkand” (to quote Mika Waltari, Hagar Olsson, James Elroy Flecker, and Maclean’s A person from England all in one).

The most impressive, and most recent, exposure to Vis, and to Komiza, came by way of Olga Tokarczuk‘s book Flights, translated by Jennifer Croft, which recently won the Man Booker International. It’s one of the most memorable books I read recently (although unfortunately I’m not able to read it in its original Polish). I found the scenes set on Vis and Komiza – a fuga-like, ever-returning bead of stories telling of small-scale marital tragedy – particularly haunting. 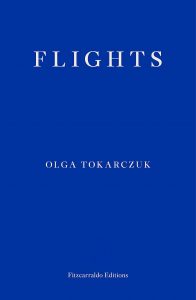 Presenting my research at the Wavescapes conference in Split and Komiža (island of Vis), Croatia. 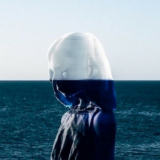 I changed around the topic of my talk a bit, and eventually examined fictional responses to rising waters in Let me be frank with you, Odds against tomorrow, and New York 2140. More on that research here.

Fascinating range of perspectives, including presentations on art practice, conservation, ecological thinking, waterscapes in particular national cultures as well as across national borders.

One session that resonated particularly well with some of my own research interests was a panel that featured Christina Heflin, who spoke of “Surrealism, Marine Life and Non-Ocular Modes of Sensing” in interbellum French surrealist underwater movies;  Srećko Jurišić, who presented on  “Amphibian Humanoids of the Mediterranean” in movie; and Eni Buljubašić on “The Adriatic monk seal in Croatian Narratives”.

Other fascinating talks including a presentation on a walk along “the zero meter altitude line into the hypothetical new coast line of the Netherlands”, a project by Maud Canisius; Killian Quigley’s presentation on the “Seascape and the Future of Land: Aesthetics, Ethics, and the Anthropocene”; and the keynotes, ranging from Adeline Johns Putra’s on “The shapes of water in climate fiction” to Rebecca Giggs’s on narrative non-fiction of the whale, and Joško Božanić’s considerations of practices and words in the eastern Adriatic archipelago.