Teaching Kim Stanley Robertson’s New York 2140 today for my ”Topics in Post-45 American Literature”  class – we discussed the future storyworld in the novel ao. in the light of concepts such as Aldo Leopold’s Land Ethic (referenced in New York 2140) and stewardship.

Some of the questions that formed the basis of discussions today:

“The key concept for today’s class is “stewardship”, a concept that (to a degree) can also be related to the Leopoldian land ethic. Can you relate the concept of “stewardship”, as it appears from your theory reading, to New York 2140?” 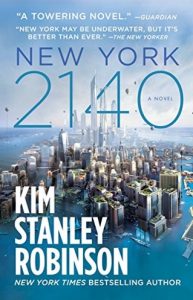 Lively discussion today – which also left me wondering to what extent key concepts within environmental thinking such as stewardship and the land ethic have been applied by others to contemporary literary fiction.

I already wrote on the question of agency in Robinson’s New York 2140 here;  one forthcoming article also examines the Land Ethic (currently under review).