For the latest issue of Fennia, I wrote a reflection article about “Governing the future: perspectives from literary studies”, as a commentary to Rhys Jones’s article “Governing the future and the search for spatial justice: Wales’ Well-being of Future Generations Act.”

Part of my current research project on genres of future storytelling in the context of cities at the water. 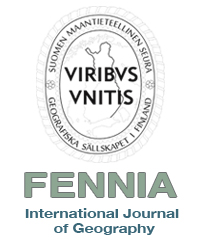 Abstract:
“Taking its cue from Rhys Jones’s article “Governing the future and the search for spatial justice: Wales’ Well-being of Future Generations Act”, this commentary reflects on some of the challenges attached to attempts to govern the future. It proposes perspectives from literature and literary studies to enrich how we imagine the future. This commentary maps out how literary fiction and other forms of future storytelling associated with qualia – the “how it feels” of future possible worlds – may provide an important complementary to other, more distancing, modes of envisioning the future.”

“… : what can fictional texts contribute to our thinking of the future? The example of Bellamy’s Looking Backward, a literary novel that in its time was influential within urban planning and policy, provides one obvious reference, illustrating how utopian literature, nineteenth-century scientific romance, or science fiction can posit alternative societies. But literary fiction, in its various forms, has always been concerned with counterfactuality – with imagining the not-yet; with juxtaposing different possible worlds and with considering possible futures, from small-scale deliberations about whom to marry (the famous dilemma of Rastignac, in Balzac’s Le Père Goriot [1835]), to momentous changes in world history (such as in Dick’s The Man in the High Castle [1962]). Westphal (2007, 59, 63), in Geocriticism, considers literature as “experimental field of alternative realities,” and a “laboratory of the possible”. More generally, literature does not only describe possibilities, it is arguably also about extending an awareness of the possible into the world of the reader, providing readers with an expanded sense of possibility (Meretoja 2017). Literary studies has in turn long developed methods and frameworks to speak of possible worlds, also in relation to future possibilities (see Ameel & Neuvonen 2016).”