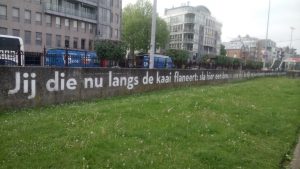 Today I’ll participate in a workshop of the Texts ≈ Buildings networks, in Brussels in association with the Department of Architecture, KU Leuven.

I’ll present a paper on polyphony and urban planning. I examine Peter Holvoet-Hanssen’s Quay Poem, an in-situ poem painted on the Antwerp quays during Holvoet-Hanssen’s tenure as city poet, as an example for unpacking literature’s potential as a complex and always ambiguous, open-ended repository of knowledge, but also as a way to consider ways in which urban planning practices can work towards polyphony and narrativity.

My talk ties in with my broader research project on future visions of cities at the water.

Many thanks to Michael Vandebril, coordinator of Antwerp City of Books, for his extensive introduction of the Quay Poem during a recent visit to the site.

“This workshop, organised in the framework of the WOG Texts ≈ Buildings, focuses on Choices and Strategies of Spatial Imagination as Ways of Knowing. By focusing on conceptual, contextual and disciplinary “transpositions” between disciplines, we intend to tackle the Texts ≈ Buildings from the angle of architectural and literary imagination as sources of knowledge of the built environment.”