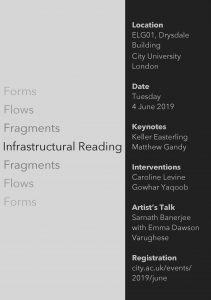 Just arrived in London for the ”Infrastructural Reading. Fragments, Flows, Forms” workshop at the University of London – a workshop that ”sets out to explore how literary, visual and other narrative forms mediate and intervene into current debates on cities, urban spaces and sustainable infrastructure developments”.

Sounds like exactly the kind of thing I have wanted to participate in all these years!

Really excited to have the opportunity to present my work to this interdisciplinary audience and to learn more from all the other attendants and from the artist’s and intervention speakers’ talks.

I’ll give a talk on ”Formal Adaptation and Retreat in Contemporary Fiction of New York and New Jersey” and on how in selected literary fiction, the engagement ”with climate change [and] … with disruptive practices in the twenty-first city, takes shape in literary form itself: in the adaptation of particular tropes and in the retreat of literary language through a deliberately sparser vocabulary, gaps at sentence level, or lacunae in the narration. Looking at such instances of retreat and adaptation on a formal plane may also reflect on non-fictional narrative models for living in a coastal city under threat, including those found in urban planning, policy, and future scenarios.” (Ameel 2019)
The talk is part of my broader project on future narratives of cities at the water in planning and fiction – more here.

A big thank you to the powers that be for freedom of movement and excellent train connections in Europe, which has given me the possibility to travel to Germany and now to London for work, and to France and Italy on holiday the past six months, all smoothly via rail.

Thanks to everyone at Narrative2019 – inspiring three days in Pamplona! Wide array of narrative research from different parts of the globe, lots of interesting talks, good discussions over coffee. I presented on what I call ”fraught fictionality” – the use of fictional elements in non-literary future narratives. Part of my broader project on future narratives of cities at the water in planning and fiction – more here. Hope to be able to make it to Narrative2020 in New Orleans next year!