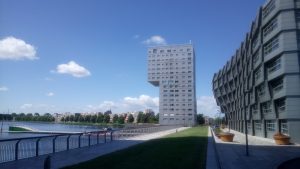 The last city on earth: Almere in Weerwater. Picture by L. Ameel

With much of the world in quarantine or lock-down, questions of how we come to terms with catastrophe have not exactly become any less topical.

Its with mixed feelings that I announce the publication of my latest article, written in collaboration with Stef Craps from Ghent University:

A free eprint (for the first 50 users) can be found here:

From the Introduction of “flooded cities”:

“This article examines two contemporary flood novels originating from the Low Countries: Weerwater (Dorrestein 2015) by the Dutch author Renate Dorrestein and Vloed (‘Flood’; Six 2012) by the Flemish author Roderik Six. We approach the flood tropes in these novels as examples of indeterminate allegory, in which multiple layers of meaning invite competing possible readings. While not referring unequivocally to anthropogenic climate change, Weerwater and Vloed offer important insights into literature’s complex interaction with climate change and rising water levels in the way they draw attention to the language in which traumatic experience is couched, as well as by highlighting the enduring flexibility of novelistic form to evoke our changing relationship to the environment.”

“In environmentally themed fiction, the trope of the flood has arguably become ‘the dominant literary strategy for locating climate change’ (Trexler 2015, 82–83). Literary fiction can provide an important complement to future visions of environmental relations as they are found in STEM texts (cf. Hulme 2011). One crucial contribution lies in the way literary fiction is able to provide a sense of qualia, of what it feels like to live under possible or future environmental circumstances. A second one is grounded in the metafictional realm, in how literary fiction is able to pose questions about storytelling and about the kinds of literary tropes, narrative forms, and genres at our disposal to narrate past, present, and future engagements with our changing environment. On both accounts, Renate Dorrestein’s Weerwater and Roderik Six’s Vloed provide important perspectives from a particular cultural and geographical setting with accute relevance for climate change and rising sea levels. Both novels can be seen as illustrative of literature’s potential as ‘laboratory of the possible’ (Westphal 2011, 63) in the way they envisage personal and societal resilience under environmental duress. The events in Weerwater, in particular, operate in close dialogue with discourses on Dutch can-do attitudes vis-à-vis the water, and with ideas on urban resilience in the face of rising water and global warming. Vloed eschews direct references to ecocritical concerns, but, like Weerwater, it draws extensively on tropes from flood fiction and environmental future fiction to reflect on the human capacity for survival, including concerns about reproduction, sexuality, and gender dynamics.

The collapsing temporalities in Vloed, and the sense of powerlessness felt in Weerwater by the protagonist when confronted with the otherworldly fog, can be interpreted as a reminder of the limits of language and narrative form for grasping the vast scales of climate change, but also as allegorical attempts to interrogate our interaction with the environment, with all the sensory and cognitive tentativeness such interaction entails. Our reading of Six and Dorrestein is in line with Astrid Bracke’s insistence, in her article ‘Flooded Futures: The Representation of the Anthropocene in Twenty-First-Century British Flood Fictions’, on the significance of the metafictional level in narratives that make use of flood tropes. As she suggests, the uncertainty in such narratives about what is real and what is unreal, within the storyworld as well as for the reader, chimes with ‘the deep epistemological uncertainty at the heart of the Anthropocene’ (2019, 284). In their use of indeterminate allegory, Dorrestein’s and Six’s texts emphasise the lack of control over sense-making processes, as particular narrative tropes turn out to have diverging and contradictory meanings. At the same time, the novels’ metaleptic operations affirm the creative, world-building potential of language, which, it is implied, literary fiction can unlock.”

Many thanks to co-author Stef Craps and to special issue editors Astrid Bracke and Katie Ritson; thanks also to the friendly hosts in Almere and Leuven during my visits to those cities; special thanks to the project manager of student home Torres for allowing me on the roof of the building – scene of the last man in Vloed.

The article is part of my research project on future cities at the water in literature, policy and planning – more on that project here.