My research project on planning narratives in the Helsinki waterfront, and specifically in the planning of the postindustrial districts Kalasatama and Jätkäsaari, comes to a close with the publication of a book that brings together the conclusions of several of my earlier articles, and that includes a wide range of new materials. The book, entitled “The Narrative Turn in Urban Planning: Plotting the Helsinki Waterfront”, will be published with Routledge in November of this year. It can already be pre-ordered here. 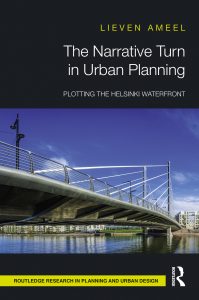 “This is a fine contribution to the planning field and will be especially helpful to those interested in the stories told around planning strategies and projects. It draws together and enriches the literature on narrative and storytelling, both generally and specifically in relation to planning and urban studies. It contains two well-developed case studies of major redevelopment projects in one of Northern Europe’s major cities which illustrate the different ways narratives inform, get used in and are generated by planning activity. Many will find this book a really helpful resource.”

“Narratives, in the context of urban planning, matter. This is not a new argument – if anything, it has become something of a commonplace in thinking and writing of the contemporary city. It is implicit in planning theory paradigms such as communicative and discursive planning theory, and is met also in a range of approaches to the city as diverse as urban history, sociology, ethnography, literary urban studies, and human and cultural geography. The narrative view of planning is implicitly founded on the thought, following Henri Lefebvre ([1974] 1991), that space is relative and intersubjective, and it is a view that draws on the long legacy of the linguistic turn in the humanities and social sciences. Cities are, in the words of Doreen Massey, “the intersections of multiple narratives” (Massey 1999, 165), and planning always participates – willingly and consciously, or not – in the formation of these intersections. The interest in urban narratives goes hand in hand with an increasing awareness that urban planning could (and in many countries legally should) take into account experiential, “subjective” place-based information, shared in the stories people and communities tell of their place in the world. As a result of such shifts, and following a range of intertwined paradigmatic turns variously described as “cultural”, “spatial”, “rhetorical”, “communicative”, and “narrative”, planners have emerged during the past decades as producers, curators and negotiators of diverse narratives, rather than as the descendants of the hero-planners from the modernist era. But the conceptual and methodological apparatus available to planning theorists and practitioners to assess this narrative turn has remained fragmented and unevenly developed, and has largely remained separated from developments within what is arguably its most relevant cognate field: narrative studies.

Little systematic analysis has been carried out to examine the different kinds of narratives that are used in the context of urban planning from a particularly narrative perspective, and to date, there is no comprehensive study of how narrative – and concepts from narrative and literary theory more broadly – can enrich planning and policy. While several researchers have noted the existence of a “narrative turn” or a “story turn” in planning, few have found it necessary to problematize the concept of “narrative” in this context. What is meant, exactly, when we speak of narratives in urban planning? How are these narratives defined, what kind of typologies can we begin to draw up? What is the relationship between such narratives and the built environment? And starting from there, what methods for analysis and conceptual tools can be applied to examine the production, dissemination, and reception of urban planning narratives? These are the key questions addressed in this book. Setting the focus squarely on examining urban planning in terms of its narrative characteristics, this study gives a key role to methods and concepts from disciplines with long-standing expertise in this respect: literary studies, narratology – the study of narrative – and rhetorics. Narrative is defined here, following James Phelan, as a “rhetorical act: somebody telling somebody else on some occasion and for some purpose(s) that something happened” (Phelan 2007, 3-4). What is told is the story, and the telling can be in oral as well as in written form of text. I will return to the definitions of story and narrative, and the extent to which these can be applied to planning, in more detail in the following chapter; for now, this definition will have to suffice.

To put narratives first in a study of urban planning is not to say that this book is not concerned also with the materiality of the actual city. What I hope to elucidate, with an analysis of two specific case studies of urban planning, is the extent to which the actual – planned, built and lived – city is shaped by narrative structures in planning, and how narrative and the material urban world are part of a firmly intertwined and interactive meshwork of meaning and experience. Narratives that are created, told and circulated in the context of urban planning eventually turn into the stone, glass and concrete of the built and lived city; they guide and define the material realities of the city. And the built environment in turn produces its own stories to be retold or contested. An urban redevelopment project that is envisioned in terms of its industrial heritage may result in a preference for specific urban morphology or building material (such as red bricks to mirror earlier industrial architecture) and in the preservation of specific features of the built environment (such as obsolete tram rails or quay boulders). Certain types of building height, building block structure, and traffic solutions will be preferred, depending on whether a development is presented as part of the storyline of city centre expansion, or, conversely, as that of a new garden town that brings nature into the urban fabric. Features of the built environment in their turn produce particular experiences and narratives. An artificially constructed canal may produce stories of division and separation between different parts of the city – or quite the opposite, it may foster the experience of a recreational space linking these, all depending on a complex combination of often unpredictable factors. The windowed street-level spaces designed by planners for front stores may be used instead for bicycle parking or for community meetings, creating unintended spatial uses that may give rise to a host of narratives of an area’s semi-public spaces.

Following Jonathan Raban, cities are “plastic by nature”, and if we “mould them in our images”, they “in their turn, shape us by the resistance they offer when we try to impose our personal form on them” (Raban [1974] 1988, 10). Narratives are seen here as drawing on, and producing, such resistance, and as situated on the interstices between city planners, city inhabitants, and the cities they work and live in. But narratives in the context of planning are never natural or self-evident, even when they are presented as evocations of causal or organic relationships. They are also instruments of power, used to legitimize interventions in space, dislocations, and the prioritization of specific interests over others.”