Published this week: my book The Narrative Turn in Urban Planning: Plotting the Helsinki Waterfront (Routledge).

What constitutes a story in the context of urban planning, and what doesn’t? What Helsinki waterfront area was briefly conceptualized as “woman city”? Did a prominent developer really claim that “segregation is good”? Why is the sledge hill in Jätkäsaari not a sledge hill? This and much more in The Narrative Turn in Urban Planning. 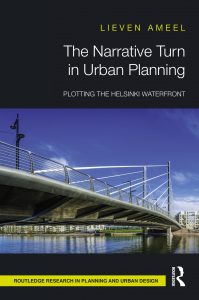 Please order it to your libraries, review it for your journals, read it – engage with what works, and critique what doesn’t.

From the generous preface by James A. Throgmorton:

“… I enthusiastically welcome the publication of Lieven Ameel’s new book. … his project takes past work on stories and storytelling a big step forward. Claiming “there is no comprehensive study of how narrative – and concepts from narrative and literary theory more broadly – can enrich planning and policy,” he has crafted his book to serve as the first go-to text for students and researchers who engage with urban planning in terms of narratives. He asks: (1) What is meant, exactly, when we speak of narratives in urban planning? (2) What kind of typologies can we begin to draw up? And (3) how does a narrative analysis unpack different, always politicized, visions of a better future city? With this focus and set of questions in mind, he draws upon methods and concepts from literary studies, narratology, and rhetoric. He defines key concepts, offers a functional typology of different types of planning narratives, and applies those concepts and theories to two case studies from contemporary planning for Helsinki’s waterfront.”

“Cities are always, in the words of Doreen Massey, “the intersections of multiple narratives” (1999, 165). It is a concept of the city that resembles Robert Park’s famous notion of the city as a “mosaic of little worlds that touch but do not interpenetrate” (1915, 608). The statements by Park and Massey, respectively, reflect two different visions of how the city’s narrative complexity functions: as diverse city worlds that closely interact (in Massey’s view) or that, in Park’s view, are merely casually touching upon each other. The challenge of planners is to be aware of the narrative complexity within which they operate; to be able to survey, to incorporate, and to foster the city’s repository of multiple narratives.

Planning, as this book has argued throughout, is fundamentally concerned with narrative. Planning processes and planning documents reveal, shape or contest existing narratives, and in planning, power relations and language are firmly entwined. Planners are involved in a form of “persuasive storytelling” (Throgmorton 1996) that looks backwards, by defending particular choices, as well as forwards, in the way they project visions of the future. They act within a broad ecology of narratives, including media narratives, everyday citizen narratives, and cultural representations of space. In dialogue with such various modes of storytelling, planning draws on existing narrative frames and rhetorical elements to select, choose and formalize particular stories of an area, city, or city-region, which are consequently materialized into the built environment as construction gets underway.

This book has set out a range of perspectives and methods for approaching the narrative complexity of a planning area, for developing planning with narrative, and for analysing narratives in the context of planning. The framework for such an analysis is provided by the threefold typology that distinguishes between narratives for, in and of planning. Narratives for planning consist of the existing narratives of a location, prior to planning: everyday stories, cultural representations, historical documents. Narratives in planning include the narrative texts and practices produced by planners or from actors within planning and policy (other agencies within the city, regional government, private actors operating in cooperation with planners). Narratives of planning are the stories of a development area told parallel or posterior to the planning proper, for example in branding or place-making strategies, but also in the way local stories react to and communicate with planning and development of an area. This threefold taxonomy of narratives in the context of planning provides a hermeneutic tool for scholars, planners and the general public to talk in more precise terms about authorship, context and objectives of planning narratives.

In the context of the increasing “storyfication” of planning and policy, and of the “narrative turn” in planning theory, it has been particularly important to set out by clearly defining the key concepts for a narrative analysis of non-fictional modes of storytelling, starting out with definitions of narrative, story, and narrativity. Narrative denotes what happens when someone tells someone else something, on a particular occasion and for a particular reason. What is told is the story. In this definition, maps, pictures, and elements in the built environment are not narratives, but they can contain narrativity – the potential to evoke a particular story.

All planning begins with some kind of survey of the area. A narrative mapping, which aims to chart an area in terms of the stories it has generated, will put a particular focus on metaphor, plot, and the relationships between the location and personal or communal development. The examination of a century of writing about the Helsinki waterfront, in Chapter Three, shows a rich and sometimes contradictory set of cultural meanings associated with the area. The Helsinki shoreline appears in this mapping as a liminal space of possibility for individuals as well for the transformative powers of society, enabling romantic encounters across social boundaries, but also individual moments of contemplation and rebirth. It functions as an environment in which the (social, gendered, ideological) fault lines of the city become apparent. Most of all, this is an area that gains its transformative powers from its peripheral location outside of the regular urban fabric, its closeness to the sea and its connection with other shores.

A narrative approach can be applied to all the phases of planning, from survey to participation, from the planning text to the interaction between the eventual built environment and new narratives of place. With the help of narrative mapping, local experiential knowledge can be foregrounded and used to challenge and supplement more quantitative place-based information. For researchers interested in how narratives in planning are rhetorically structured, a narrative approach can provide crucial insights, by drawing on questions such as: To what extent do plans draw on archetypal modes of emplotment or on particular textual genres? Who are the leading characters and actors within the planning storylines – planners, citizens, tourists, developers? What metaphors are used, and how are rhetorical tropes used to provide implied causality to particular decisions? Are there contradictions within the narratives in planning? Finally, narrative approaches can be instrumental in providing insights for developing future planning with narrative. They can identify a lack of cohesion or degree of contradiction within proposed planning storylines, or help identify blind spots in terms of forgotten actors or voices. In its most radical form, planning with narrative can result in planning that allows for greater polyphony, including contradictory voices or multiple storylines, and for planning without closure.

From a narrative perspective, some recommendations suggest themselves in terms of how planning with narrative could be further developed. Attending to the role of protagonists is one element that deserves closer attention: planning documents have come some way from the distanced and passive voice still prevalent in the final decades of last century, but more could be done to ensure that the set of actors and voices in planning narratives displays a genuine diversity, and that citizens, too, are visible as actors, in addition to planners and institutional forces. Enabling citizens to speak in their own voice within planning texts, even when their perspectives run counter to planning narratives, is an important element in moving towards a degree of polyphony in planning.

Finally, a greater attentiveness to the fundamental narrative characteristics of planning can result in planning narratives that are more coherent and more convincing, but also in narratives that are grounded in local layers of meaning and flexible in the face of future change. Similar to literary novels, plans tend to have clearly delineated endings. Cities, by contrast, continue their relentless cycles of change and transformation, regardless of the completion of city plans. To develop planning with narrative, including the possibility of planning without closure or with multiple and even contradictory storylines, is one way to prepare for inevitable change and for future uncertainty.”

Full acknowledgements can be found, of course, in the opening pages of the book – let it suffice to say here that I would not have been able to write this book without the support, help, and feedback of numerous students, colleagues, and my family. THANKS!