The final days 2020 saw the publication of my latest article, “The Destruction of Amsterdam: Flood Allegories in Contemporary Dutch Literature” in Tijdschrift voor Nederlandse Taal- en Letterkunde / Journal of Dutch Linguistics and Literature 136/4. 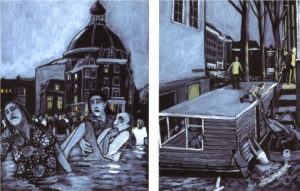 The article is the second part of a triptych of articles I wrote on Low Countries urban flood narratives, with the other articles:

Ameel, Lieven 2021: “‘A Stream of Words’ – The Antwerp Quay Poem as Interrogation of Urban Open Form, Polyphony, and Radical Dialogue”, an article forthcoming in Textual Practice 2021, which examines Holvoet-Hanssen’s Antwerp Quay Poem, a public poem painted on the Antwerp flood walls in the early 2010s.

The articles are part of my research project on future visions of cities at the water in planning and fiction.

From the introduction of “The Destruction of Amsterdam”:

“The last years have seen a marked interest in representations of destructive climate change and flooding in literature (see e.g. Dobraszczyk 2017, Bracke & Ritson 2020), with a strong tendency in ecocritical approaches to read such representations in terms of their implications for understanding radical climatological and environmental change. In the context of Dutch literature, critics have foregrounded a perceived lack of such representations (Bracke 2016; see also Anker 2018; Craps & Mertens 2019; Rouckhout 2019). Pieter Boskma’s Tsunami in de Amstel (Tsunami in the Amstel) and Guido van Driel’s De ondergang van Amsterdam (The Destruction of Amsterdam), two contemporary texts that imagine a flooded Amsterdam, would seem to respond to this perceived lack of engagement with flooding on the part of Dutch literature. In Pieter Boskma’s poetry collection Tsunami in de Amstel (2016), rising waters, evoked in lofty iambic heptameters, flood Amsterdam until only a few iconic towers – the Westertoren; then the Rembrandttoren – are left standing. Similarly, in the elegantly painted panels of Guido van Driel’s graphic novel De ondergang van Amsterdam (2007), water is shown rising up from the earth to overwhelm the Netherlands’ first city, causing chaos and devastation. While Van Driel and Boskma draw in these works on contemporary tropes of radical climate change, the tropes of the flood and of urban destruction in both books are not easily recoverable for ecocritical readings. In a way that is closely bound up with the formal features of both works, something more complex than the vocalizing of climate concerns is at stake here, with Boskma and van Driel utilizing the trope of the flood to evoke a range of possible meanings, from personal reckoning with past poetics, reflections on loneliness and homelessness in the contemporary city, to metapoetical considerations about art’s ability to convey catastrophe.

This article examines representations of urban destruction and of rising waters in Boskma’s Tsunami in de Amstel and in van Driel’s De ondergang van Amsterdam, suggesting an allegorical reading of these tropes. I foreground the ways in which these texts reflect productively on visualisations and narrative frames of catastrophe, and how they propose alternative temporalities (in the case of Boskma) and alternative visual perspectives (in van Driel) for imagining possible urban end-times. The focus on allegorical readings is concomitant with an interest in the specific media utilized by Boskma and van Driel, with the ritualistic mode of the lyrical poem (cf. Culler 2017) and the subjectifying focalizations of the graphic novel (cf. Mikkonen 2017) arguably geared toward complex allegorical associations, rather than toward mimetic strategies. I will set out by a brief contextualization of flood representations in the Dutch context, and by outlining the groundwork for an allegorical reading of the trope of the flood.”

“In Boskma’s text, the potential presence of the reader is linked with the possibility to participate in the ritualistic properties (as outlined by Culler) of lyrical poetry, and in how they can participate in producing lyrical enunciations in a way that is coeval with the lyric I, or to identify with the addressee. In Boskma’s poetics, that enunciative function has demiurgic, world-creative properties, the power to awaken a world into being by the act of naming, as in the poem ‘Zonder Titel’ (p. 25). For all its metric prowess, the final, epic part, by contrast, evacuates such immediacy of presence. ‘Tsunami in de Amstel’, if anything, sketches the limits of the epic, narrative poem in contemporary treatment.

In van Driel’s De Ondergang van Amsterdam, the possibility of presence is one of aligning different perspectives and competing visualizations, and announced in the intricate mise-en-abyme in the opening panels: the protagonist looks at a painting to make sense of possible future destruction, while we as readers look at him, invited to consider both the possibility of destruction and the extent to which visual or narrative interpretations can give us access to possible future destruction. In the form of his graphic novel, then, van Driel has provided a tentative answer to the question Titus starts out from, in front of Rembrandt’s painting of the destruction of Jeruzalem: ‘kan ik mij daar iets bij voorstellen?’ (p. 6) – ‘is this something I can imagine?’” 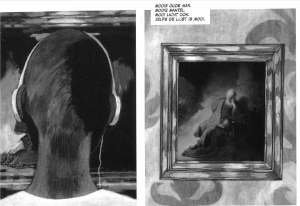