Some of my work on the cultural and literary meanings of the Helsinki shoreline have  made it to the MyHelsinki website, the city marketing site of my home city. Featuring a great picture of a researcher in action on the Helsinki shores. 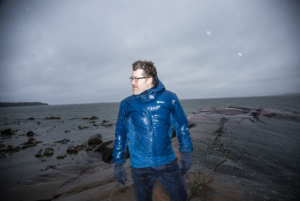 The photo is shot on the southern shore of the Helsinki island where I live. Hard not to like Helsinki for promoting its shores with this realistic picture of conditions in Helsinki in the month of May (it was raining relentlessly).

I’ve personally always liked the way in which MyHelsinki presents the city through insiders’ stories, and I’ve also used their website for discovering new places, so glad to have been involved.

“The seashore is a place of change”

For literary scholar Lieven Ameel, Lammassaari Island is one of Helsinki’s finest locations.

“Helsinki’s maritime environment is a place for metamorphosis and new opportunities in literature. Fictional characters visit the sea to imagine what their future lives might look like. Many social changes have also begun by the sea.

For instance, it is by the sea that the protagonists in Arvid Järnefelt’s Veneh’ojalaiset (1909) receive a vision about a better future. In Anja Kauranen’s Pelon maantiede, the headquarters of a feminist guerrilla fraction is located on Lammassaari Island.

We residents of Helsinki’s Lauttasaari district have traditionally had a close-knit connection to our home island. I, however, find that the finest maritime environment is to be found on Lammassaari.

The experience begins from the moment of departure toward the island, as the view from the duckboards opens out over a layered vista of the city looming in the horizon. The city of Helsinki was founded in the Vanhankaupunginlahti bay area. The rapids area at the mouth of the Vantaanjoki river also offers a vignette of 19th century industry.

Those who walk along the same duckboards can also cast their gaze over urban visions of the 1990s in the Arabianranta district, as well as toward something completely new in the Kalasatama district.”