I’m speaking today (23 Aug) at the closing symposium of The Changing Environment of the North research project. I’ll be a brief (15 min) presentation on the subject of redemptive scripts in the context of planning and fiction of the New York waterfront, building on my earlier work on metaphors and modes of emplotments with which to approach the waterfront.

The closing symposium also serves as the inofficial launch of the recently published book coming out of the project: Visual Representations of the Arctic: Imagining Shimmering Worlds in Culture, Literature and Politics, edited by Markku Lehtimäki, Arja Rosenholm and Vlad Strukov (Routledge 2021). The book features a.o. my article on balloon perspectives on the Arctic: “Balloon Explorers, the Panorama, and the Making of an Arctic Nomos in Contemporary Fiction.” 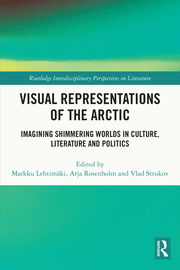 “Privileging the visual as the main method of communication and meaning-making, this book responds critically to the worldwide discussion about the Arctic and the North, addressing the interrelated issues of climate change, ethics and geopolitics. A multi-disciplinary, multi-modal exploration of the Arctic, it supplies an original conceptualization of the Arctic as a visual world encompassing an array of representations, imaginings, and constructions. By examining a broad range of visual forms, media and forms such as art, film, graphic novels, maps, media, and photography, the book advances current debates about visual culture. The book enriches contemporary theories of the visual taking the Arctic as a spatial entity and also as a mode of exploring contemporary and historical visual practices, including imaginary constructions of the North. Original contributions include case studies from all the countries along the Arctic shore, with Russian material occupying a large section due to the country’s impact on the region.”

Interested in the nonhuman, ontological instability, unseasonable weather, and/or New York fiction? My latest article, published open-access with Routledge, examines all of these – and more. The article, “Nonhuman Presence and Ontological Instability in Twenty-First Century New York Fiction” is part of an exciting set of texts that look at how nonhuman spaces are narrated, the edited volume Narrating Nonhuman Spaces: Form, Story, and Experience Beyond Anthropocentrism. Some of my personal highlights of the volume include Sarianna Kankkunen‘s work on monomaniacs of the Anthropocene, Brian J. McAllister’s article on space-time in poetry, and Laura Oulanne on Woolf and Mansfield. Thanks to Marco Caracciolo, Marlene Karlsson Marcussen and David Rodriguez for bringing this volume together. 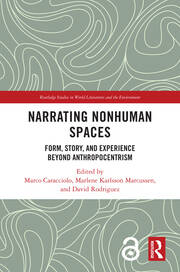 Thanks to Marco and the NarMesh group for inviting me to the workshop on nonhuman space in Ghent, 1 Dec 2017, where early versions of the articles were presented and where we could get to know each other in person in a convivial and stimulating environment.

This article explores ontological instability in three contemporary New York novels. Drawing on Brian McHale’s Postmodernist Fiction and on the concept of the fold as developed by Gilles Deleuze, it examines Teju Cole’s Open City (2011), Jonathan Lethem’s Chronic City (2009), and Ben Lerner’s 10:04 (2014) and looks, in particular, at how occurrences of nonhuman presence and menacing weather conditions threaten the ontological stability of the narrated storyworld.

“Human consciousness, and its ability to connect with the world, is at once “blind” and, paradoxically, capable of visionary “insight,” as the protagonist of Open City, drawing on Paul de Man, infers. The visionary experiences of Ben, in 10:04, driven by something close to hallucination, and the insights provided by “blots on vision” and by looking out of the corner of one’s eye in Chronic City, point to a similar fawed yet insightful sensitivity, in a way that defes binary oppositions or causal hierarchies.
The real, the possible, and the imaginary are described as continuations of the same plane, coeval with human perception. In 10:04 and Chronic City, in particular, there are endeavors to extend that folding of inner and outerinto the world of the reader, such as the hiccups of Perkus in Chronic City, visualized on the page in blank spaces and the freworks above Brooklyn Bridge, in 10:04, which are imagined on the physical page in the hands of the reader, thus extending tangibly into the reader’s physical world.
Approaching ontological instability and the interaction between human perception and nonhuman environment through the concept of the fold helps home in on those elements that spill out from the fctional representation into the actual world. Such spill-over effects re-enact the Baroque breaking of spatial boundaries; Deleuze was intrigued, following Wölffin, in how Baroque form was “always put in motion” ending “in the manner of a horse’s mane or the foam of a wave,” and how “matter tends to spill over in space” (4). The endeavors to reach out into the reader’s referential world, evident especially in Chronic City and 10:04, are one particularly tangible example of such overspill. In language, a tentative overlap between the consciousness of reader and narrator is attempted, a moment of “coeval readership” (Lerner 93). Similar to Perkus’s view of New York City, which becomes for Chase an “ellipsistic” experience that starts to affect his own perception of the surrounding world, some of the
visionary experiences in these novels may color the reader’s view of the referential world, enabling a sense of interconnection with the nonhuman environment, in the way of a fold connecting inner and outer, actual and possible.”(p. 86)

A shorter and amended version of this article appears in Style 55 no. 3 under the
title “Ontological Instability and Nonhuman Presence in Twenty-First-Century
New York Fiction.”