I’m participating in the 21.9. ALUS symposium “Large-Scale Housing Projects as Productive Space in Literature and Culture” at the Tensta konsthall, Stockholm, Sweden.

I will present a paper on Pirkko Saisio’s Concrete Night (1981) and the suspect “realism” of the concrete high-rise suburb in literary fiction.

The starting point of my presentation is the observation that the novel has been widely read as a “realistic” depiction of the high-rise suburb, and consequently, as providing reliable insights into the supposed social and moral state of depravity in these environments. But a closer examination shows that this realism is far from accurate. The environments of the novel cannot be placed on any actual map of Helsinki, and most of the descriptions of the surroundings provide a reflection of a troubled, hypersensitive mind, rather than a detailed depiction of space. The evocation of the high-rise suburb thus has to be set against a complex cross-examination of the naturalist and symbolist undercurrents of the novel, as well as against the overall poetics and ethos at work in the oeuvre of Saisio.

Very much looking forward to the full program and to having a symposium in what promises to be a fascinating venue in an urban peripheral environment – the Tensta konsthall. Many thanks to Lydia Wistisen of Stockholm University for bringing this all together!

More information can be found here. 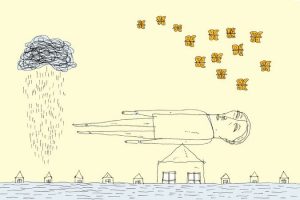 Presenting today a paper on narrating the waterfront in crisis at the University of Florence, at the conference “cross-disciplinary perspectives on urban space”. Full programme can be found here. Abstract below:

Narrating the Waterfront in Crisis

Urban studies has recently seen the emergence of a new paradigm: that of the resilient city, with its focus on urban readiness for disruptive change. The crisis-awareness in urban theory is aptly mirrored in contemporary city narratives, from literature to the big screen, in which urban dystopias as well as more subtle depictions of a city in crisis proliferate, attuning the public to unsettling possible futures and alternative storyworlds. Narrative is a key concept for how people make sense of the possibility of future threats, and for how urban policy projects action in the face of such threats. Following what has been called a ”narrative”, ”deliberative” or ”communicative” turn, city planners are increasingly making use of techniques from literary fiction, projecting scenario’s, and acting as curator’s of sorts between different story lines (Ameel 2014; Cohen 2008, 111-115). This paradigm shift in urban planning simultaneously highlights the importance of incorporating local voices and cultural stories into planning and policy, as well as foregrounding the communicative aspect of planning for the future.

In my paper, I will examine narratives of the New York waterfront from two distinct, but intermingling perspectives. First, I will look at how narrative fiction frames the experience of a waterfront in crisis, and how it presents the possibility of alternative futures. Ben Lerner’s novel 10:04 (2014) and Nathaniel Rich’s Odds against tomorrow (2013) are particularly revealing texts, but I refer also to other relevant novels such as Jonathan Lethem’s Chronic City (2009). Second, I will examine how, in the department of city planning’s comprehensive waterfront plans (1992, 2011), the simultaneous possibility of alternative storyworlds structures the way policy is shaped. I am interested in particular in the concept of temporal orchestration, which organizes the elements of the plot around the reader’s interest in alternative storyworlds (Dannenberg 2008).

Not entirely related to issues of urban studies, but a new volume of ACME is out, with some interesting avenues of research into narrative and spatiality. The article “Using Narrativity as Methodological Tool” by Eeva-Kaisa Prokkola offers one part of the story how narrative analysis gained ground in geography and the social sciences. It’s a rather shortish article however – more concrete narrative analysis, and more extensive examples of specific methodological tools and their application could have further strenghtened the (very valid) case for narrative-oriented research into questions of (critical) geography. Promising approach nonetheless.