Year 2017 for the Department of Food Hygiene and Environmental Health

The Department of Food Hygiene and Environmental Health conducted research actively, with altogether five dissertations completed and 46 peer-reviewed articles published in international scientific journals during the year. In a way, the year marked the end of an era for the department, since Hannu Korkeala, a long-time professor of food hygiene and the head of department from 1996 to 2013, retired as professor emeritus in spring 2017. However, he actively carried on with his research activities. The work of the teaching staff was made easier by the opportunity to fill the position of a university lecturer in food hygiene. Yagmur Derman, DVM, DPhil, began completing the duties in summer 2017.

The entire staff of the department, as well as the doctoral graduates from Hannu’s group and important partners were invited to the warm farewell party organised by Hannu.

The year 2017 for the research groups and disciplines

Securing extended funding from the Academy of Finland for research focused on the population genetics and defence mechanisms of lactobacilli can be considered the highlight of the year for the research group led by Professor Johanna Björkroth. In the project, the group is investigating stress responses caused by oxygen and the internal interaction of food spoilage microbe communities. Anna Murros, LVM, supervised jointly by Johanna Björkroth, Maria Fredriksson-Ahomaa and Hannu Korkeala, defended her doctoral dissertation Identification and Characterization of Yersinia from Food and Environmental Sources. The dissertation describes Yersinia nurmii and Yersinia pekkanenii, two new bacterial species named in honour of Esko Nurmi and Timo Pekkanen, departed veterinarians and professors of food hygiene.

The research group led by Professor Maria Fredriksson-Ahomaa conducted active collaboration on both national and international levels. Together with the research group led by Professor Roger Stephan from Switzerland and Sauli Laaksonen, DVM, the group investigated the prevalence of foodborne pathogens in reindeer. Inter-departmental cooperation was conducted in research on connections between sow mortality and meat inspection findings together with Professor Mari Heinonen from the Department of Production Animal Medicine. For teaching in meat inspection coordinated by Fredriksson-Ahomaa, University Lecturer Riikka Laukkanen-Ninios paid special attention to developing laboratory exercises. The purpose of this reform is to give students more responsibility for planning and progressing in their laboratory work, as well as emphasise the analysis of results and provide individualised supervision particularly at the beginning of the laboratory work. Students considered the reform good.

Paula Oikarinen, a new doctoral student in the group led by University Lecturer Annamari Heikinheimo, began working in a project funded by the Academy of Finland investigating extended-spectrum beta-lactamases (ESBL) producing Escherichia coli in chicken farming environments. With the same funding, a cooperation project was begun with the Faculty of Medicine of the University of Helsinki and the Hospital District of Helsinki and Uusimaa to investigate bacteriophages in decreasing the prevalence of MRSA in pigs. From August onwards, Annamari Heikinheimo served, in addition to her role as a post-doctoral researcher, as a fixed-term researcher in the antibiotics section of the Microbiology Research Unit of the Finnish Food Safety Authority Evira, focusing on monitoring the antimicrobial resistance of bacteria isolated from animals and food, as well as related research, development and expert duties.

Sara Kovanen, MSc , working under the supervision of Professor Emerita Marja-Liisa Hänninen and University Lecturer Rauni Kivistö, defended her doctoral dissertation Molecular epidemiology of Campylobacter jejuni in the genomic era, which examined the significance of, among others, poultry and public bathing water in domestic Campylobacter infections with the help of a method (wgMLST and GeP) developed by the group for comparing sequences of whole bacterial genomes. In a certain region, the same MLST genotypes were found in bathing water as in patients treated during the summer. The genome of Campylobacter strains isolated from chicken were identical to those found in patients only in 24% of cases, taking into account the temporal connection between the sale dates of chicken meat products and disease onset.

Katja Selby, DVM, from the research group led by Professor Hannu Korkeala, defended her doctoral dissertation Growth temperature variation and heat stress response of Clostridium botulinum. Using Listeria monocytogenes, the group described the heat resistance mediated by plasmid-borne ClpL. The group had two Chinese visitors, Xiaobing Jiang and Yu Tao , who were completing a one-year post-doctoral period. In addition, Hannu Korkeala organised the Application of next generation sequencing in food safety and public health course for the Doctoral Programme in Food Chain and Health in cooperation with Professor Miia Lindström and Doctoral Student Hanna Castro. In 2017, Hannu Korkeala was awarded an honorary doctorate by the University of Liège and an honorary membership by the Finnish Veterinary Association.

In the basic research conducted by Professor Miia Lindström’s group, the most significant achievement was identifying the regulation of neurotoxin synthesis in Clostridium botulinum type E, frequently occurring in Finnish waterways and fish, and a source of food safety risks in fish products. Based on projects investigating the pathogenic bacteria risks in raw milk, particularly in the case of Listeria monocytogenes, Finnish legislation concerned with the sale of raw milk was amended in 2017. Miia Lindström was selected as a Fellow of the Helsinki Institute of Life Science HiLIFE, which entails €180,000 in fellowship funding. This funding was used to launch the Controlling the most poisonous poison – genetic regulation of the botulinum neurotoxin project, which investigates factors involved in the neurotoxin synthesis of C. botulinum. Doctoral Students Maria Nowakowska and Inês Cunha Portinha were successful in applying for salary funding through the Doctoral Programme in Food Chain and Health, and Anna Mertaoja through the Doctoral Programme in Microbiology and Biotechnology. Doctoral Student Hanna Castro from the research group is serving as a member of the HiLIFE board.

In a study based on an extensive dataset, the food control research group led by University Lecturer Janne Lundén proved that reductions in preventive food control led to weakened hygiene levels in new restaurants. During the second year of the three-year multidisciplinary project concerned with the Oiva food safety information publication system, funded by the Ministry of Forestry and Agriculture, the group has been focusing on risk conceptions held by businesses and control officials. A new area of interest for the group is the prevention of food fraud. Janne Lundén served as the director of the Doctoral Programme in Food Chain and Health.

In the virus research group led by University Lecturer Leena Maunula, Tuija Kantala, LVM, defended her doctoral dissertation Presence of hepatitis E virus (HEV) and markers for HEV infection in production swine, human patients with unexplained hepatitis, and veterinarians in Finland. In this extensive study, HEV antibodies were frequently (10%) found in veterinarians. In spring 2017, the virus group was visited by Agathe Laudet from the University of Toulouse, an exchange student in the Erasmus programme. In her work, Laudet examined the durability of viruses in food by focusing on the murine norovirus.

The food control group led by University Lecturer Mari Nevas investigated the flow of information in surveys of foodborne epidemics, related to the Innuendo project. Further focus areas were the control of antimicrobial drugs in production animals, as well as the effectiveness of animal protection monitoring in cooperation with the Department of Production Animal Medicine and the University of Tampere. Mari Nevas also participated in a two-week international training on the assessment of foodborne risks, organised by the German Federal Institute for Risk Assessment in Berlin.

Professor Raimo Pohjanvirta’s toxicology research group analysed the toxicity of two promising AH receptor agonists in vivo and in vitro. Atefeh Nasri, DVM, DPhil, from Iran began as a visiting scholar in Pohjanvirta’s group by working in a project that compares the toxicity of phytoestrogens and synthetic xenoestrogens.

Thanks to long-term international cooperation, the group led by Associate Professor Mirko Rossi has been involved in proving that Helicobacter suis, a zoonotic bacterium found in pigs, could have its origins in primates. Research findings indicate that the change from macaques to pigs as hosts would have occurred approximately 15,000 years ago and that the domestication of pigs has had a significant impact on the spread of the H. suis bacterium among the pig population. As regards the Innuendo project led by Rossi, he organised the course Genomics in foodborne pathogen surveillance and outbreak investigation in Vitoria-Gasteiz, Spain. The course had altogether 55 participants representing several veterinary medicine and health authorities and universities across Europe, in addition to which 52 individuals followed the course through online streaming. Doctoral Student Federica Palma from the University of Bologna visited Rossi’s group, working on the molecular epidemiology of Salmonella typhimurium and nomenclature related to whole-genome typing.

Genomics in foodborne pathogen surveillance and outbreak investigation, a course organised by Mirko Rossi in Spain, had participants from many European countries.

Activities outside the University

The departmental staff has maintained their activity in the field of community relations, as well as in scholarly assessment work and editing scientific journals. Professor Björkroth served as the deputy chair of the Research Council for Health of the Academy of Finland and the chair of the Board for Gene Technology. Professor Raimo Pohjanvirta served as an expert member of a European Food Safety Authority working group that assesses the toxicity of dioxins and dioxin-like PCB compounds in food and feed to humans and domestic animals. Mirko Rossi served as a member of an international technical working group of PulseNet that validates certain novel laboratory methods used for monitoring foodborne diseases. Doctoral Student Mariella Aalto-Araneda served as the chair of One Health Finland ry and participated in 2017 in the Joint External Evaluation conducted in Finland by WHO as a next generation observer. The department has also been strongly represented on the advisory board of the Finnish Veterinary Association and various committees.

During its recreation day, the department travelled to Suomenlinna to visit the Customs Museum and the Vesikko submarine. During the day, the traditional prizes for the most helpful and friendly staff members from both genders, based on a similar prize awarded in Finnish comprehensive schools, were granted deservedly to Senior Laboratory Technicians Henna Niinivirta and Esa Penttinen. The theme in the annual Christmas party was music, with a typically high-level programme and commendably theme-oriented costumes worn by the revellers. 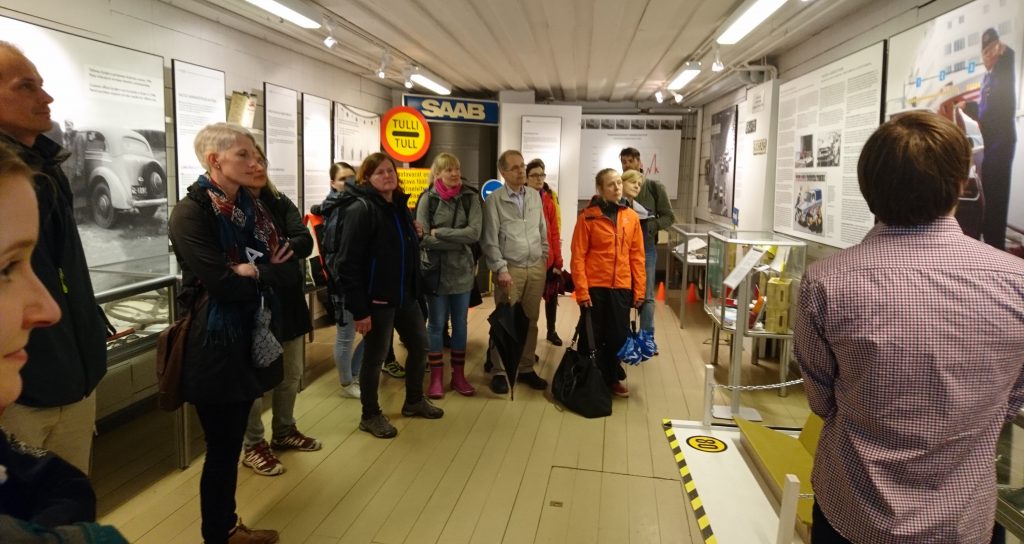 During the recreation day spent at Suomenlinna, the staff visited the exhibition at the Customs Museum.