In addition to Finland’s centenary, the department celebrated a healthy crop of doctoral dissertations. During the year, five veterinarians defended their dissertations on topics related to production animals, while in the field of poultry, there were two new dissertations: Leena Pohjola’s Backyard poultry flocks in Finland – an infection risk for commercial poultry and humans? and Eija Kaukonen’s Housing conditions and broiler and broiler breeder welfare – the effect of litter condition on contact dermatitis in broilers and breeders, and the effect of elevated structures on broiler leg health. Taneli Tirkkonen defended his dissertation with the title Porcine mycobacteriosis caused by mycobacterium avium subspecies hominissuis. A dissertation on bovine reproduction with the title Superovulation and embryo transfer in dairy cattle – effect of management factors with emphasis on sex-sorted semen was defended by Marja Mikkola, while Stefan Björkman defended his dissertation, Parturition and subsequent uterine health and fertility in sows, on pig reproduction. Björkman merits another mention, since his dissertation received the grade “pass with distinction”. During the year, he also passed the Diplomat examination of the European College of Animal Reproduction. It is gratifying to see so many completed works at the end of the year.

The Department of Production Animal Medicine received many visitors from across the globe. In August, Taya Forde, Roman Biek and Professor Ruth Zadoks arrived from the University of Glasgow to teach the week-long NOVA course (Molecular Epidemiology of Infectious Diceases) coordinated by Professor Päivi Rajala-Schultz. The altogether 37 course participants represented eleven different universities in Australia, Canada, Columbia, the United States, Trinidad, England, Germany, as well as the Baltic and Nordic countries. The NOVA PhD course Advanced Imaging Procedures in Canine Clinical Veterinary Science was coordinated by Professors Thomas Spillman and Olli Peltoniemi. The participants were from Estonia and Finland. The section on reproductive science was taught by Professor Anne-Rose Günzel-Apel from Hannover and Professor Sibylle Kneissl from Vienna. In early autumn, Professor Graeme B. Martin from Australia visited the Saari Clinic, giving an interesting lecture to staff and students with the topic Clean, green and ethical animal production. Around the same time, Professor Yuzo Koketsu from Japan visited the pig research group, while earlier in the year a group from Valio came to see the operations of the department and the Production Animal Hospital. Another name in the long list of visitors was Professor Dörte Döpfer, who arrived from the United States to conduct a seminar on hoof diseases and plan research cooperation.

In the annual animal welfare forum, held this year at Think Corner of City Centre Campus, advances in animal welfare research were presented. The department’s staff has participated in organising many other events as well, such as the From beak to tail – mechanisms underlying damaging behaviour in lay­ing hens and pigs seminar held in conjunction with the ISAE congress in Denmark. Events organised in Finland included a successful workshop, Animal Ethics for Veterinarians, and the autumn seminar of the Doctoral Programme in Clinical Veterinary Medicine with the topic Tools for selling your ideas and getting interest to  your presentation.

The department’s staff has made many appearances around the world, lecturing on their research topics at various events, and examining theses and dissertations. Finnish media has expressed special interest in animal welfare. Docent Laura Hänninen in particular has excelled in managing communications both on social media and when media representatives come asking for comments.

Acknowledgments were handed out left and right: Professor Anna Valros was appointed an expert of the EU Platform on animal welfare. A poster by Eija Kaukonen, DVM, received a prize at the Annual Veterinary Congress where the best article published during the year in the Finnish Veterinary Journal, Selenium and vitamin E sufficiency in Finnish suckler herds, was also highlighted. The article was co-authored by veterinarian Sanni Kallio (previously Värränkivi) and Heli Simojoki, LVM, together with their research partners Heidi Härtel, LVM, and Professor Satu Sankari.

New and old in teaching

The biggest change in the teaching organised by the department in 2017 was the amalgamation of two courses, Animal Management and Welfare, and Clinical Feeding. The objective was to familiarise students with bovine- and pig-related matters before they begin their practical training in cattle sheds and piggeries. First-year students have been tended to well: they have visited Valio, the police stables and the Ollikkala piggery, which students time and again find pleasant learning experiences. In addition, the students have an opportunity to visit the Saari unit to get a handle on the production animal field. Other instruction has been organised as usual. Lectures and assignment work continue at Viikki and Saari under the supervision of the department’s staff. Practical training continues to be provided to students at the Production Animal Hospital during their third and fifth years of studies, in addition to which collaboration with the Seinäjoki region has continued in a well-tried manner: during the fifth year of studies, students have an opportunity to exchange one week at Saari for a pig-oriented week spent in Seinäjoki. Indeed, approximately one-third of students have annually taken this opportunity.

In addition to ongoing projects, funding was granted for several new research projects. Professor Anna Valros is in charge of Finland’s responsibilities in the new Sustainable Pig Production project under the European Research Area on Sustainable Animal Production (ERA-NET SusAn), while Laura Hänninen, DVM, is participating in the project Terveellisemmät ja tehokkaammat tavat rauhoittaa nupoutettavia vasikoita (“Healthier and more effective methods of polling calves”), funded by the Finnish Development Fund of Agriculture and Forestry. The Finnish Development Fund of Agriculture and Forestry also granted funding for projects led by Professor Olli Peltoniemi (Alkiosta porsaaksi [“From embryo to piglet”]), Professor Päivi Rajala-Schultz (Umpeenpanokäytännöt suomalaisissa lypsykarjoissa [“Drying off methods for Finnish dairy cattle”]) and Professor Timo Soveri (Lypsylehmien sorkka-alueen ihotulehdus – uusi uhka lypsykarjataloudelle [“Digital dermatitis in dairy cows – a new threat to dairy farming]). The Rural Development Programme for Mainland Finland granted funding for the project Terve kalkkuna (“Healthy turkey”), conducted in cooperation with the Satafood Development Association, as well as for a cooperation project with the Länsi-Kalkkuna company concerning turkey transport. In addition to the funding above, the department’s staff has been granted a great number of small research and travel grants, particularly by various foundations.

Community as a resource

In early 2017, a trip to Tartu was arranged for the staff of the Department of Production Animal Medicine. At the destination, travellers got to know the teaching facilities and curriculum of the local veterinary medicine institution, and contemplated the department’s internal cooperation and its development. Additionally, a small-scale research seminar was held together with the Tartu staff. The pleasant trip made it easier to get to know each other a little better. The year was wound up in a successful manner in downtown Helsinki with an escape from Christmas parties. Luckily, (almost) everyone made it out of the trendy escape rooms! 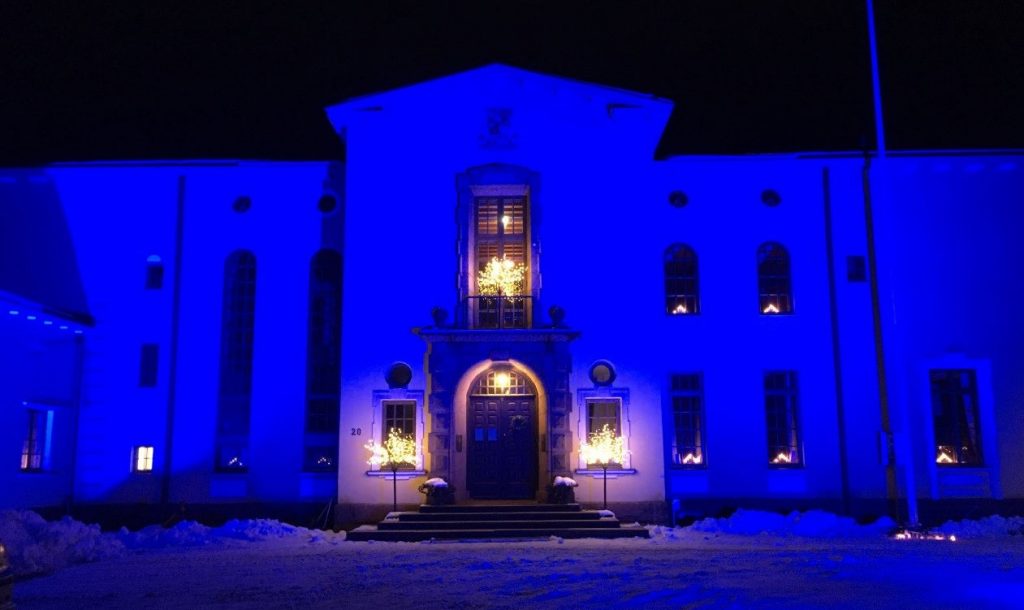 In honour of Finland’s centenary, the main building of Saari Manor was illuminated with blue light in December.