The year was a success for the Department of Equine and Small Animal Medicine both with regard to teaching and research. Researchers at the department published 45 international peer-reviewed scholarly publications which covered a wide variety of issues related to animal health and medicine as well as animal welfare. Twenty-five licentiate and four bachelor’s theses were completed at our department. In addition, as always, both professional and academic postgraduate degrees have been completed at the department during the past year. Of these Tytti Niemelä, LVM, studied the use of hyaluronic acid in the treatment of equine joints in her doctoral thesis, Soile Pakkanen, LVM, defended her doctoral thesis on the effects of horse sedatives and anaesthetics, and Magdy Adam’s DVM, doctoral thesis concerned sheep sedatives and anaesthetics. All of our subjects received extremely good student feedback for their courses. Constructive feedback from students will be taken into account when developing courses.

In November the department arranged a course funded by the Nordic NOVA network on feline and canine renal and urinary tract diseases. Some of the teaching was provided as online lectures with teachers coming from Uppsala University in Sweden and Tufts University in the US. In addition to the Nordic countries, the course attracted researchers and students from Thailand, the United Kingdom, Estonia and the United States to Viikki. 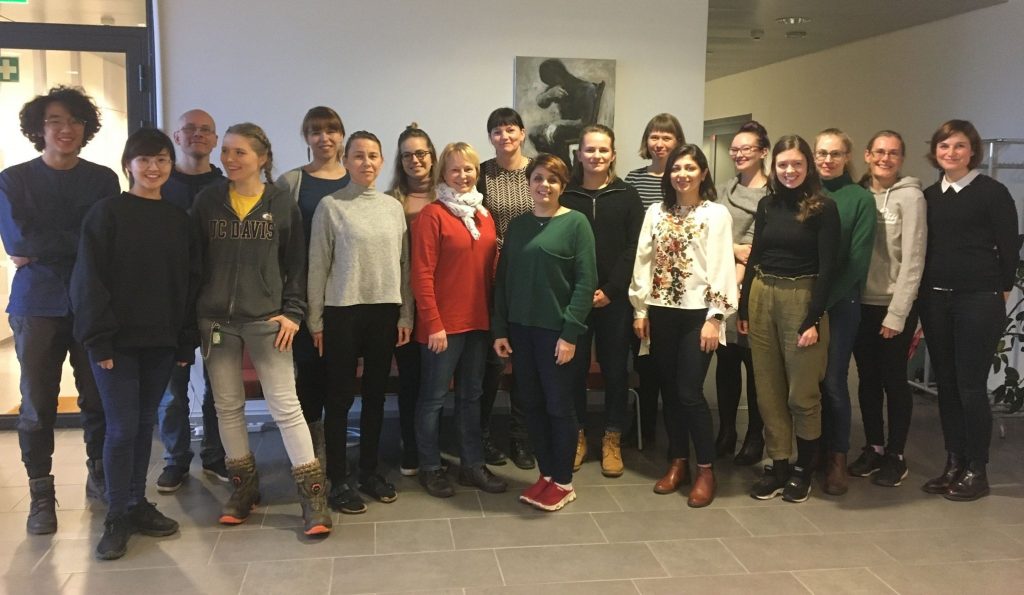 Participants of the international NOVA course in Viikki. The course coordinator of the course, Emilia Gordin, LVM, is on the right.

The staff of the department has also contributed to the organisation and lectures of the Annual Veterinary Congress and other continuing education events, participated in veterinary professional education in other countries, such as Germany, Sweden and Estonia, as well as contributed to international textbooks. In addition, we have participated in canine and equine trade fairs and other public events.

Clinical teaching has also been developed during the year and various models have been utilised in teaching in addition to Veterinary Teaching Hospital patients. Thanks to the digital leap funding from the University of Helsinki, students were provided with virtual small animal surgery patient cases on the OpenLabyrinth platform to support the teaching during the clinical year. The expansion of the use of electronic learning material was noted as being a positive trend also in the report of the international assessment group (EAEVE) evaluating veterinary teaching, when the group visited the Faculty in the autumn. In equine training, a pedagogical model the size of a real horse was introduced, which allowed the students, for example, to practise feeling organs in the abdominal cavity through the rectum. The horse was named “Ritsku” after Riitta-Maria Tulamo, professor emerita of equine surgery. The department wishes to thank the external funders who enabled the acquisition.

Funding secures the progress of research

In addition to numerous smaller grants, Orion Oy awarded Mohsen Hanifeh, DVM, a significant amount of funding for research on the effects of modifying intestinal microbiota in the treatment of canine enteropathy. In collaboration with the laboratory of the University of Texas, researchers from the department studied the significance of microbiota of the large intestine in chronic intestinal inflammation in canines and were the first in the world to describe the differences between healthy and ill dogs.
Projects led by Docent Anna Hielm-Björkman received grants from the Swedish Cultural Foundation. Her groups study causalities especially with regard to dog nutrition and illnesses, as well as the utilisation of the dogs’ excellent sense of smell in detecting early-stage cancer in people. The groups also collaborate in research with companies in the sector.

The joint research fund of Agria and the Swedish Kennel Club awarded grants to Anna Boström, DSc, and Anna-Mariam Kiviranta, LVM. Boström’s research includes the physical load on the musculature and skeletal system of dogs during agility performances. Kiviranta’s research subjects include persistent fontanelles in Chihuahuas and their link with clinical symptoms caused by neuropathic pain as well as disturbances in the flow of cerebrospinal fluid. 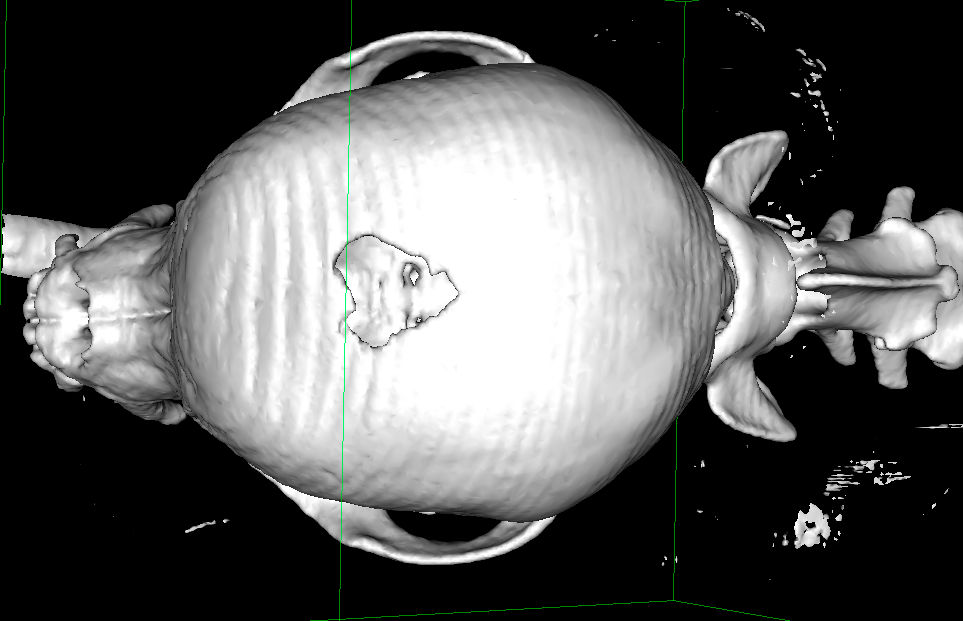 A 3D-computed tomography image of a fontanelle in the skull of a Chihuahua.

Extremely positive news with regard to the staff were the appointments of new assistant professors. Helsinki One Health, a network organisation focused on human and animal health, appointed Tarja Pääkkönen, instructor in veterinary neurology and docent, as its first assistant professor in the University of Helsinki tenure track system. The position is shared by the Faculty of Veterinary Medicine and the Faculty of Medicine. Its focus is in the utilisation of spontaneous canine disease models both in human and veterinary medicine. Pääkkönen has continued her research in neurology and launched a new extensive research project studying markers for epilepsy.

Towards the end of the year Anna-Riia Holmström, DSc, was appointed as the first assistant professor in Finland in medication safety and effectiveness in human and veterinary medicine. The position is shared by the Faculty of Veterinary Medicine and the Faculty of Pharmacy. Medication safety aims at the prevention of mistakes and “close calls” in drug therapy by studying their root causes. This kind of research is entirely new in veterinary medicine, but the aim is to apply methods used in human medication safety also to patient cases at the Veterinary Teaching Hospital.

Liisa Lilja-Maula, DVM, and Heli Hyytiäinen, DSc, continue their research at our department with part-time funding for clinical researchers from the Academy of Finland. Lilja-Maula studies the health of brachycephalic dogs, while Hyytiäinen studies the effect of physiotherapeutic means in the treatment of loose hips and other related conditions in dogs suffering from hip joint dysplasia. Several other studies related to veterinary physiotherapy are also ongoing.

Our department also received a breath of international air when Ruth Dennis,DipECVDI, visited the diagnostic imaging unit and participated in its daily activities. Dennis is an internationally renowned expert in veterinary magnetic imaging. The visit enabled discussion on challenging cases and encouragement to expand the use of the Veterinary Teaching Hospital’s high field magnet equipment. These kinds of visits are also extremely valuable with regard to the continuing education of veterinarians.

The ground-breaking research conducted at the department in applied pharmacology achieved a true breakthrough: the new pharmacological molecule, vatinoxan, proved effective and safe. It reduces the adverse effects on the cardiovascular system of pharmacological agents used for animal sedation and anaesthesia. The reduction increases the safety of anaesthesia and, consequently, enables increasingly demanding operations on sick animals. The members of the research group working under the auspices of the department are cited as inventors in the patent vatinoxan received in 2019. Another international patent application is still pending and is expected to be approved in the near future. The University of Helsinki has sold the rights to the aforementioned patents to Vetcare Oy, a Finnish veterinary pharmacological company, which will commercialise the drug discovery. It is planned that the new medication based on our innovation will come on the market in the United States in 2021. It would be the first and so far only veterinary pharmacological invention made in a Finnish university to be internationally commercialised. Vatinoxan is intended only for use by veterinarians.

Other research conducted at the department has also led to practical applications. For example, the work done by the research group on pulmonary diseases has led to the introduction of a submaximal exercise test as a means to assess the respiratory tract health of brachycephalic dog breeds. The test has been developed in cooperation with the Finnish Kennel Club, and it aims to exclude dogs with breathing issues from breeding. Another aim of the research conducted by the group is to promote the diagnostics and treatment of respiratory diseases in dogs and decrease impediments to wellbeing caused by problems in respiratory tracts.
A new finding was made in heart diseases. Maria Wiberg, DVM, discovered that sudden cardiogenic deaths of young under three-year-old Leonbergers are linked with ventricular arrhythmia, which can be detected in one day of ECG monitoring. Based on pedigree surveys, it can be suspected that the propensity for arrhythmia is hereditary.

The increase of bacteria resistant to antibiotics is a growing cause for concern in our society, and their prevalence in Finnish small animals and horses is also studied at the department. The Laboratory of Clinical Microbiology participated once again in antimicrobial resistance monitoring in companion and hobby animals and the drawing up of the Finnish Food Authority’s FINRES-Vet 2018 report.

Other ongoing research projects of the department

A great deal of other research related to the illnesses and health of small animals and horses is conducted at the department. For example, canine joint and bone diseases are studied from a variety of perspectives. A research preparation made of collagen and biodegradable plastic developed at Tampere University is being tested to repair internal cartilage damage in dogs’ joints. The study is conducted in cooperation with the orthopaedics research unit at the University of Helsinki and Askel Healthcare Oy. A cooperation project with Tampere University, funded by Business Finland, studies the applicability of novel easily moulded biodegradable composite materials promoting the growth of bone in substituting bone grafts in filling bone defect areas.

Chronic diseases in canine digestive tract, liver and pancreas have also interested researchers at the department. For example, it was confirmed that the daily intake of cobalamin (vitamin B12) is as effective as giving it weekly by injection to dogs with chronic enteropathy and deficiency of this vitamin.

Together with the Natural Resources Institute Finland and Ypäjä Equine College, material was collected related to the connection between the bedding material and the respiratory health of horses as well as annual fluctuations in energy metabolism and insulin response. The initial results of these studies have been presented in a conference. Dental pain experienced by horses and the oral health of trotters attracted a great deal of interest both in Finland and internationally. Equine Hospital patients were also utilised in studies related to sand accrual in the large intestine, corneal diseases, back pain and alterations in incisors in older horses.

Finland’s only equine “foot magnet device” has now been fully in use for a year, and it has improved lameness diagnostics both in steeds and trotters. For example, reaching a specific diagnosis for long-lasting hoof-oriented cases of lameness has often helped decision-making on the part of the veterinarian as well as the owner. The device is also well-suited for a variety of examinations.

Based on the workplace wellbeing survey conducted in the autumn, the department staff consider their work interesting if also quite hectic. Even though the combination of teaching, research and clinical work is often considered demanding, great results have been achieved in all of these areas in the past year.