The renovation has begun! 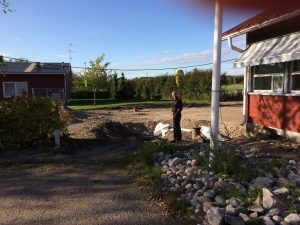 The renovation of the Saari clinic started in autumn 2019. The Director of the Production Animal Hospital Juhani Taponen is pleased with his survey the foundation of the new building.

During the year the staff excellently managed to obtain a significant sum of funding from the Finnish Development Fund of Agriculture and Forestry (Makera) for a number of projects. A group led by Docent Laura Hänninen studies in both clinical field trials and reindeer roundup conditions the effect of various pharmacological alternatives on the welfare of castrated reindeer in the Welfare of Castrated Reindeer (PORKAT) project. Another aim is to study the views of reindeer breeders and veterinarians related to the pain experienced by reindeer and the importance of mitigating the pain. Stefan Björkman, DVM, received funding for his AutoPig (Automatic monitoring of the health of newborn piglets and sows during the first days of lactation) project, which aims to develop an automated monitoring method for sows and newborn piglets during the first days of lactation. Another project receiving funding was Professor Mari Heinonen’s MIMI (minimising the use of antimicrobial drugs) project. This project aims to decrease the use of antimicrobial drugs in swine and simultaneously to develop a species-specific probiotic or probiotic combination suited to pigs.

In addition to the above, department staff have collaborated in a cryptosporidiosis project and a paratuberculosis risk management project. Projects started last year related to drying-off methods used for dairy cows, digital dermatitis in dairy cows and the sedation of calves during polling got off to a good start, and articles on the outcomes are expected to be published in the near future. Funding provided by the Finnish Development Fund of Agriculture and Forestry for these projects has been considerable. In addition, researchers from the department have received a number of smaller grants for their projects from foundations and the industry. These funding sources play a significant role in research and enable many researchers to publish their findings.

Two doctorates awarded by the department

During the year two veterinarians completed their doctoral theses. Shah Hasan, DVM, wrote his thesis on the factors affecting the quality and amount of sow colostrum with the title Challenges of hyper-prolificacy in the pig: colostrum and gut microbiota. The title of Paula Bergman’s, DVM, doctoral thesis was Sow removal in Finnish commercial herds: Epidemiological approaches, and it discussed the production endurance of sows.

Research at the department is active and productive

Research activities have been active and fruitful. There have been numerous publications of research results related to many species. It is delightful to see what a wide spectrum of animal species are studied at the department. Related to production animal health and medicine, animal welfare and behaviour as well as reproduction, publications have been accepted in international journals on cattle, swine, horses, poultry, reindeer and companion animals. Special attention was received by an article of the mastitis research group in the Journal of Dairy Science. The publication is among the 100 most cited publications since 2016.

Further investment in research was received within the Helsinki One Health network when two new tenure track researchers were appointed to the department: Associate Professor Heli Simojoki will conduct research on ruminant health and diseases, while Associate Professor Peter Krawczel will focus on animal welfare. Both of them divide their time between our department and the Faculty of Agriculture and Forestry, which will serve to increase our cooperation with our neighbouring faculty.

The staff of the Department of Production Animal Medicine travelled actively abroad and in Finland to present their research results at seminars and conferences. Professors and clinical instructors were invited to give numerous lectures on topical subjects. The mastitis research group has been particularly active in organising a Nordic cooperation network for researchers, which received funding from the Nordic Joint Committee for Agricultural and Food Research for the period 2018–2021. Department professors have participated in the development of international specialist training: Professor Olli Peltoniemi in the reproduction programme (ECAR; European College for Animal Reproduction), Professor Mari Heinonen in the swine group (ECPHM, European College for Porcine Health Management) and Docent Laura Hänninen in the welfare programme (ECAWBM,
European College of Animal Welfare and Behavioural Medicine). Clinical Instructor Stefan Björkman organised an interesting NOVA course: Reproductive health in a changing world – effects of environmental contamination and climate change. Among Finnish seminars it is worthwhile to mention the 25th anniversary seminar of our long-term partner Animal Health ETT, at which Professor Päivä Rajala-Schultz was a keynote speaker. In addition to these, staff participated in the activities of a great many workgroups and organisations inside and outside the Faculty. We gave lectures, participated in organising webinars, submitted statements and participated in the development of society as experts in our field. 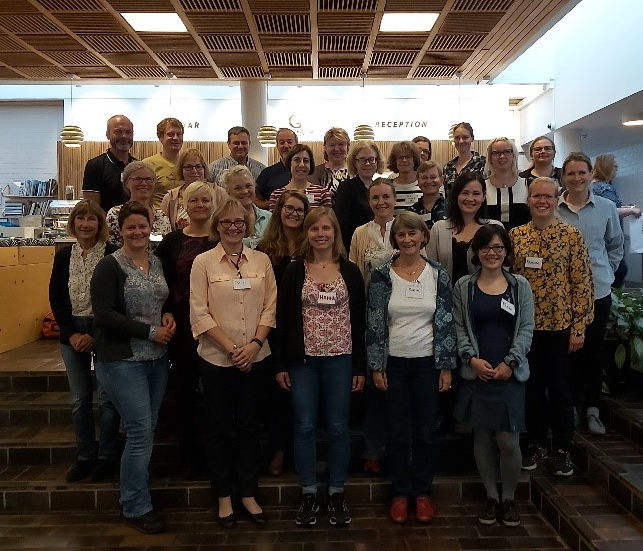 The meeting of the mastitis research group cooperation network in Tuusula was attended by many Nordic participants. 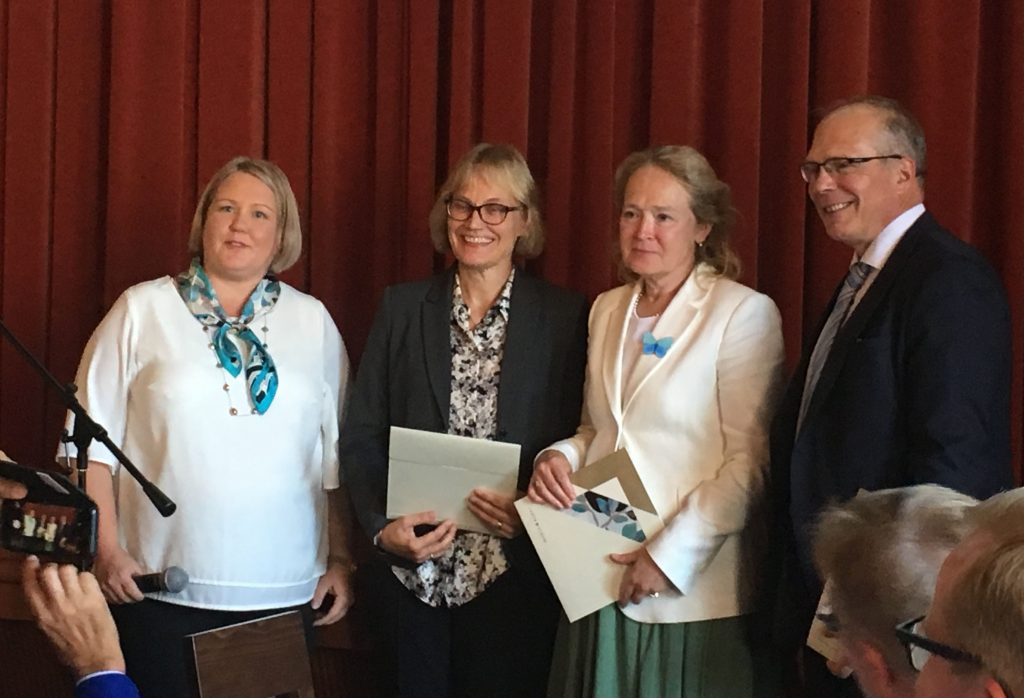 Hardly any changes were made to teaching in 2019. Lectures and teaching in clinical work continued to receive good assessments from students. Once again, the teaching staff showed their skills and commitment to teaching. The outlook was increasingly on the future and what skills future veterinarians will need in their work. Living animals, real patients, are always needed in the study of clinical skills. However, it has been increasingly found that part of teaching can be conducted with animal models and other technical aids. For example, virtual farm visits are part of modern teaching. Current camera technology enables these visit. The 360-degree camera providess excellent opportunities to present students with what animal facilities are like. During the course they can first familiarise themselves with the 360-degree video, making it possibly easier to observe various issues during subsequent farm visits.

Already for some years, the writing of licentiate theses in cooperation with the Department of Equine and Small Animal Medicine and the Department of Veterinary Biosciences has been promoted by organising thesis workshops for students. Suvi Taponen, LVM, has served as the coordinating academic from the Department of Production Animal Medicine. Annually, close to twenty students complete their licentiate thesis under the supervision of the teachers of the department.
Details related to teaching were actively reviewed during the assessment of teaching. The regular assessments provide a good moment to consider how things are done and what should be invested in next. In any case, our teaching was assessed as good, and the Faculty in its entirety received permission to carry on its teaching, as was expected.

Docent Laura Hänninen received recognition from the Teachers’ Academy which included a significant sum of money. It was used to acquire literature, participate in training and invest in collegiality. The majority of the department and Production Animal Hospital staff went on an excursion to a large goat farm and the Maritime Centre Vellamo in Kotka. A farm housing one thousand dairy goats amazed many of us, as did the fabulously designed Maritime Centre. 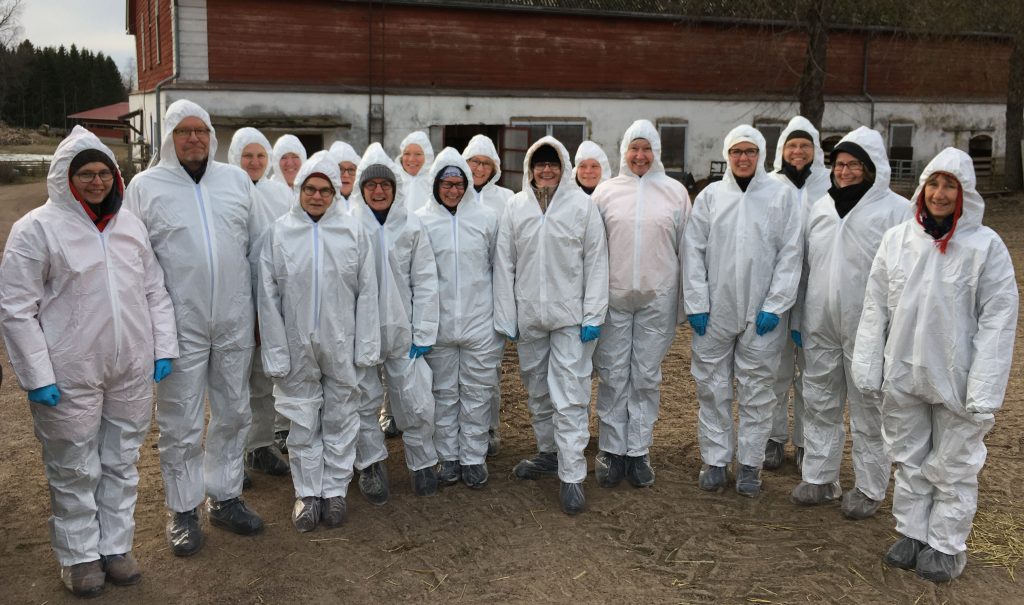 A one-thousand dairy goat farm held plenty of wonders for the department staff. Likewise for the goats wondering about the visitors.

The year was concluded successfully with a Christmas party held in stormy Lahti; umbrellas were needed on a cultural walk led by an excellent guide. The tasty dinner felt like a great reward after the walk. All in all, the department can be well pleased with the year 2019. 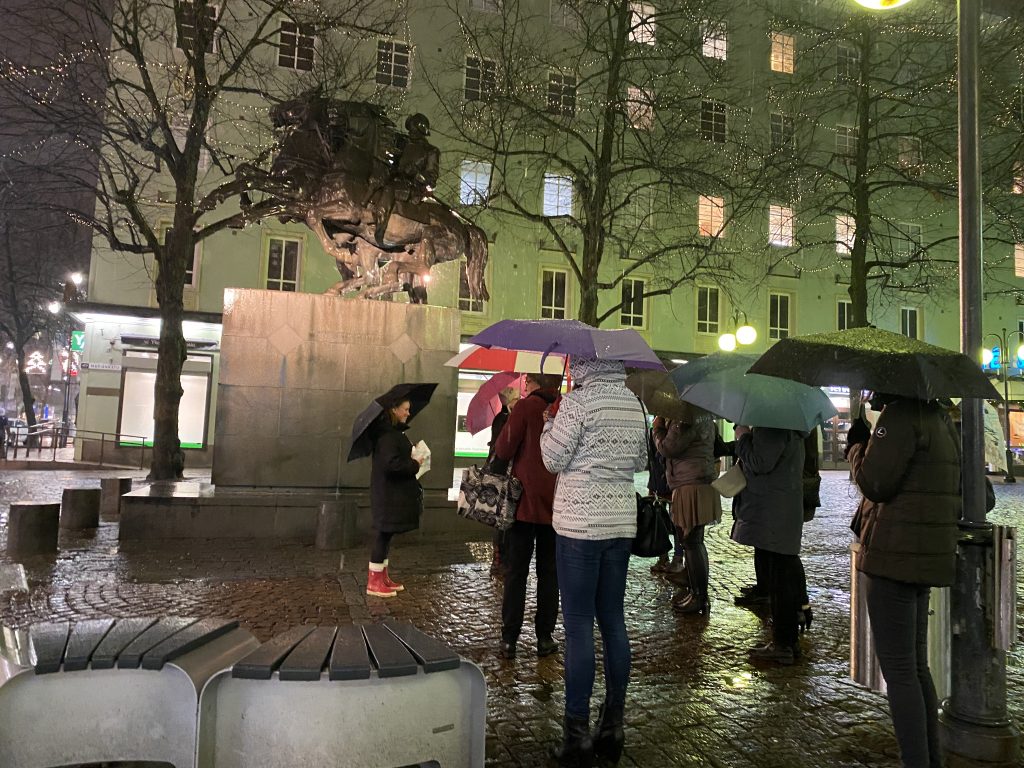 As part of the Christmas party, sightseeing in Lahti took place in wind and snow.