For the Finnish Veterinary Student Association (EKY), the year 2019 continued as eventfully as the previous years. EKY is the student organisation for students pursuing a licentiate degree at the Faculty of Veterinary Medicine of the University of Helsinki. EKY continues to hold an important place for the students, as evidenced by the almost 100% membership rate among students. Consequently, EKY aims to support our students in issues related to both studies and leisure.

The physical and mental wellbeing of students has been a hot topic in EKY as well as the Faculty in recent years. In 2018 together with the Faculty, we carried out a survey among all students regarding, among other things, the progress of studies, coping with them and social relations. The survey revealed worrying issues related to student wellbeing. Many felt that studies were overburdening, and many had considered dividing them over several years or even changing the field of study. In order to receive information over a longer period of time and compare results, we decided to repeat the survey in 2019. Measures taken based on the results of the 2018 survey were praised, and the results were generally slightly better than the year before. Student wellbeing and coping will continue to be among EKY’s most important goals, and they will be invested in together with the Faculty, supervisors, the FSHS and counselling psychologists. The aim is to repeat the wellbeing survey annually.

EKY is regularly in contact with the Faculty. The Board meets the dean approximately once a month, and there are student representatives in many Faculty bodies, such as the Faculty Council. The students of the Faculty of Veterinary Medicine have also shone in the University of Helsinki Student Union council elections with the highest voter turnout. In 2019 three members of EKY continued as members of the Student Union council. In addition, our student, Riikka Hakala, was elected to the Board of the Student Union of the University of Helsinki in 2019. EKY is part of the electoral alliance HELP together with Pykälä, LKS, HLKS and Justus.

EKY has several clubs that it supports financially under the faculty-level association. The clubs typically collect small membership fees that are used to cover various events, such as lectures, expeditions and panels. In addition to the traditional clubs, such as horse, cat and dog clubs, ethics and wildlife clubs have emerged in recent years and have established their position among students in 2019. The Faculty of Veterinary Medicine ‘speksi’ play engages dozens of veterinary medicine students, who once again managed to put together an amazing production entitled Pikkuleipä, eli kuinka lakkasin murehtimasta ja opin myymään kamaa (‘A cookie, or how I learned to stop worrying and sell junk’) performed in the spring at Music Theatre Kapsäkki.

EKY organises several large- and small-scale events for its members. The association’s internal events include its traditional orienteering adventures, the bone-chilling ghost hunt and the rich-in-tradition “Selliappro” bar-hopping tour. There were also numerous joint events with other student associations, such as EKY, Pykälä and LKS’s joint May Day party in Circus, and get-togethers with, for example, Merikadetit ry, the Physics Guild and YFK. EKY also participated in an official capacity in events organised by other associations and in several anniversary parties. Our own 73rd anniversary party was organised on 30 March at Restaurant Koskenranta, not forgetting the salted herring breakfast the next day.

In addition to parties, EKY organises a great variety of useful activities for students. Our partners give study-related lectures and our future colleagues have visited us to provide information about career paths. This year our excursion coordinator took EKY members to, for example, the Helsinki Humane Society HESY and Ali-Olli’s alpaca farm, while the sports coordinator kept us moving at a weekly floorball practice and various sports-related excursions. One of the highlights of 2019 was the NVM or Nordiska Veterinär Mästerskapet (Nordic veterinary championship) athletics meet organised in Finland, which gathered together sport-oriented students from Finland, Norway, Sweden, Denmark and Estonia. The meet culminated in ta dinner banquet organised in Building EE.

In the future EKY aims to continue to be an important liaison for students of veterinary medicine, whether it is about significant national or international issues, concerns within the profession or student life in all its forms in everyday life and celebrations. 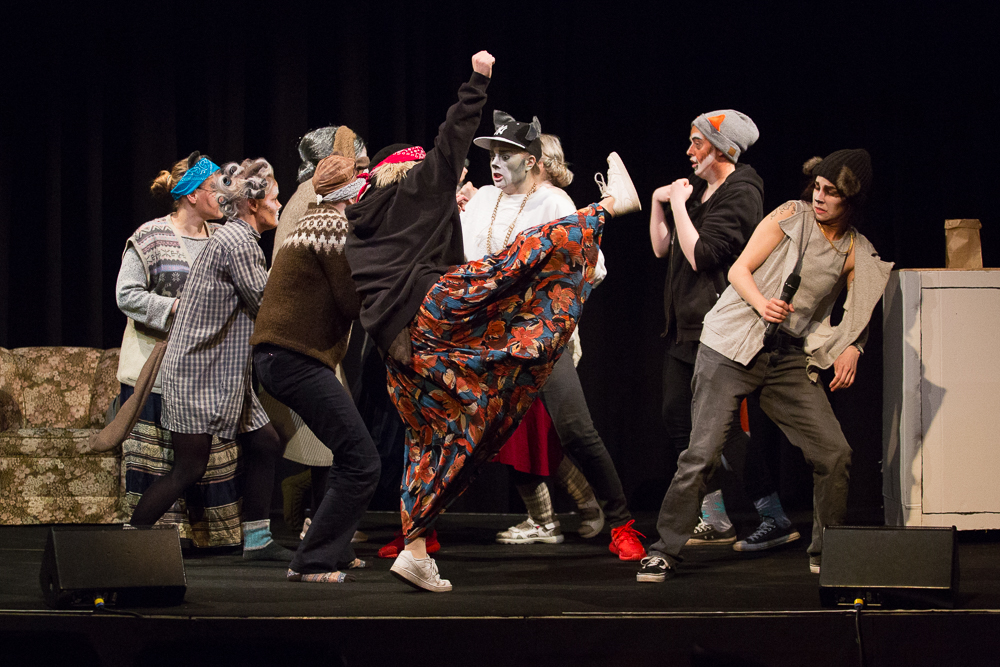 The speksi play of the Faculty of Veterinary Medicine, A cookie, or how I learned to stop worrying and sell junk provided its audience with wild times. 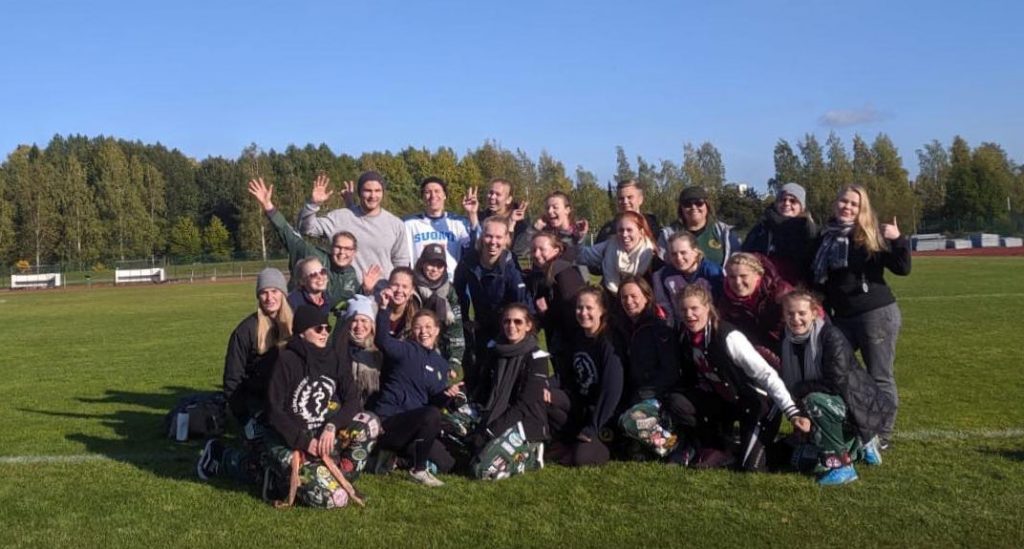 One of the highlights of 2019, was the NVM or Nordiska Veterinär Mästerskapet (Nordic veterinarian championships) athletics meet organised in Finland, which gathered together sport-oriented students from Finland, Norway, Sweden, Denmark and Estonia. Pictured Team Finland. 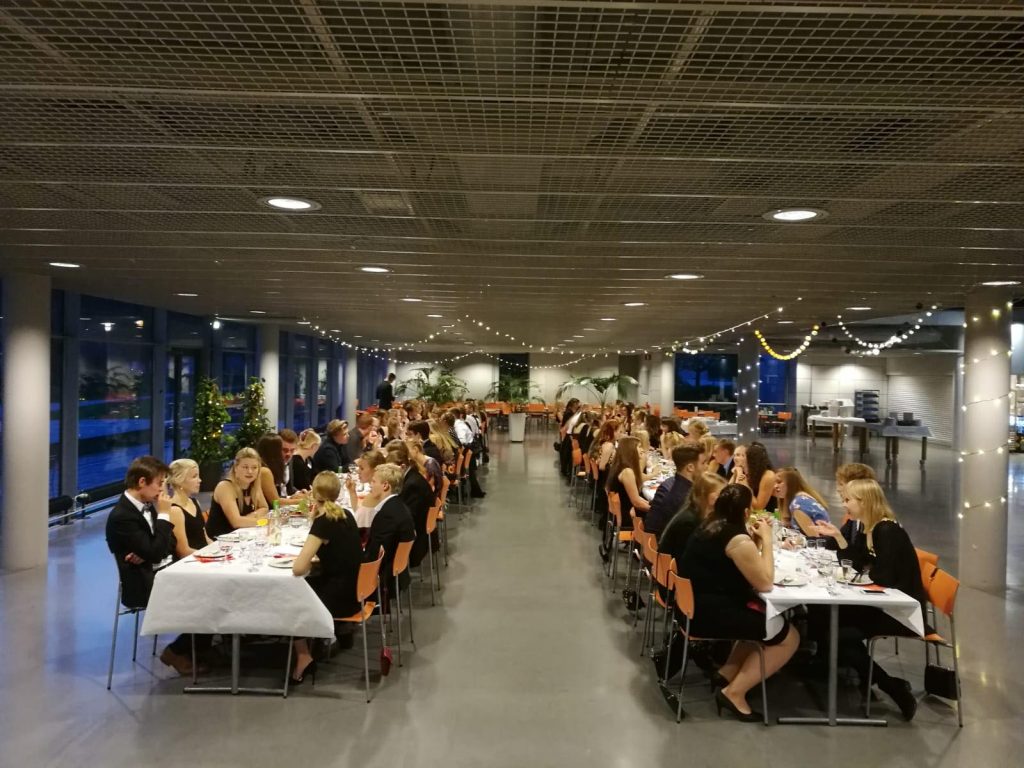 NVM was capped by a dinner banquet in UniCafe Viikuna in Building EE.

A pre-May Day game of pesäpallo against the team representing Sampsa ry. 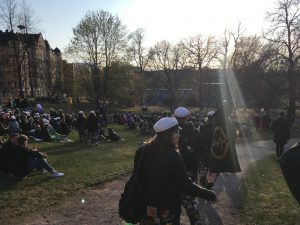 May Day was celebrated in warm spring weather.