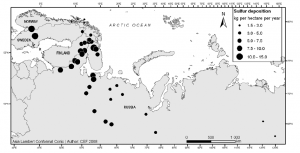 Map of sulphur depositions for the study sites in 1980. Adopted from Savva & Berninger (2010).

Human activity has altered climate, atmospheric carbon dioxide concentrations, and the concentrations of several pollutants over the last few decades. At the same time, short‐term reactions of tree growth to climatic variations have changed during the last few decades, for reasons that are poorly understood. However, the effects of the pollutants on growth of boreal forests in these remote areas have not been quantified, but even small changes in the productivity of boreal forest should have a large effect on the carbon balance.

The growth of Scots pine, the most important forest species in boreal Eurasia, has declined by about 17% or 0.0025 mm per year from the 1930s to the 1980s in northern Eurasia. We determined this by analysing 40 tree ring chronologies north of 60°N latitude and and factoring out the age and climate effects. Although the study sites were previously considered low‐pollution pristine environments, the growth decrease was significantly related to sulphur depositions. Additionally, we observed that the sulphur depositions rendered the Scots pine forests more sensitive to drought. Although the negative effects of local pollution on plant growth have been widely observed in the past, the long-term effects of sulphur emissions and its spread to ecosystems distant from the sources of pollution have never been previously documented at such a large scale.

These results are of fundamental importance for attempts to preserve the functioning of these forest ecosystems: sulphur deposition rates are still increasing in several regions of the world including the forested boreal areas of north-eastern China and eastern Russia. On the other hand, according to the European Monitoring and Evaluation Programme (EMEP) model, sulphur deposition at 35 sites in boreal Eurasia has been decreasing with a rate ranging from 0.25 to 2.92 kg S ha-1 per every 5 years over the period 1980 to 2000. This decrease in sulphur deposition should slow down the growth decline in boreal Eurasia, but the rate of growth decline will depend upon the ability of trees to recover from sulphur deposition effects, and combination of other environmental factors, such as the frequency of droughts.