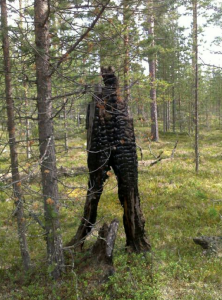 Forest fires have been the dominant disturbance regimes in boreal forests since the last Ice Age. Fire is the primary process which organizes the physical and biological attributes of the boreal biome and influences energy flows and biogeochemical cycles, particularly the carbon and nitrogen cycle. Forest fire activity is expected to increase significantly with changing climate, acting as a catalyst to a wide range of ecosystem processes controlling carbon storage in boreal forests. We compared the initial recovery of carbon (C) and nitrogen (N) pools and dynamics following fire disturbance in Scots pine (Pinus sylvesteris) stands in the boreal forests of eastern Lapland (Värriö Strict Nature Reserve), Finland, by sampling soils and measuring soil respiration from sample plots established in a  chronosequence of different forest sites with 4 age classes, ranging from 2 years to 150 years after fire disturbance (2, 40, 60, 150 years after fire). The sites are situated north of the Arctic Circle, near to the northern timberline at an average of 300 m altitude.

Our preliminary results show that forest fire has a substantial effect on the C and N pool in the litter layer decaying forest top soil layer, but not in the humus layer and in mineral soil layers. Soil respiration and biomass development showed similar chronological response to the time since the forest fire indicating that substantial proportion of the respiration was originating from the very top of the soil.