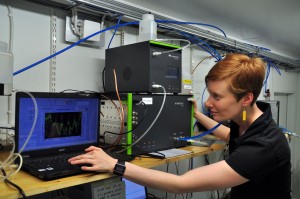 Katrianne Lehtipalo working with the Particle Magnifier in Hyytiälä.

Just a few years ago, there were no instruments which could detect recently formed atmospheric clusters, or the particle precursor vapours at atmospheric concentration levels. We needed to make those instruments ourselves. The largely unstudied size range at 1-3 nm is an area which calls for both scientific discoveries and technical innovations.

Airmodus is a spin-off company from the University of Helsinki, Division of Atmospheric Sciences. It was started in 2010 in order to commercialize some of the innovations that were needed for studying new particle formation.  Our flagship product is the Particle Size Magnifier, which is still the only commercially available particle counter detecting particles as small as 1 nm.

During the currently on-going PEGASOS campaign, there are Particle Size Magnifiers both at the ground station SMEAR II in Hyytiälä and up in the air carried by a Cessna airplane and the Pegasos zeppelin. This is the first time when airborne measurements start from 1 nm, so expectations from the results are high.