In late 1990s and early 2000s, the notion of information society was used  in examining and framing the impact that information technology had on society. Today, the notion of digitalization is used in reflecting upon the same topic, but technologies have greatly evolved and matured. Commonly referenced examples of digitalization include changes in employee-employer relations (e.g. Uber, Wolt), automation and platformization (e.g. Airbnb, Facebook). Digitalization has also influenced the overall society, e.g., the role of education institutions and easily accessible education through massive open online courses (MOOCs). In this workshop, we ask what are the impacts of digitalization upon political science. In particular, our interests relate to two dimensions:

Methodologically, digitalization influences data collection and analysis (in general, see Ahonen, 2015). The field of computational social science takes advantage of novel data sources (e.g. Lazer et al., 2009) or new methods that can be used for data analysis (e.g., Cioffi-Revilla, 2010). Novel data sources refer to (often online) digital trace data provided by users, such as Twitter (e.g., Zhang & Counts, 2015) or mobile phones as trackers (e.g., Raento et al., 2009; Eagle & Pentland, 2006). From an analytical perspective, the question is how we can use algorithmic tools, such as machine learning or simulation, to examine social phenomena. There is an emerging trend to apply these tools in political science research (e.g., Levy & Franklin, 2013; Ahonen 2015). Moreover, there are signs that empirical political science research that has calmly flown in the academic mainstream, such as the examination of texts of political party programs, increasingly takes into account the possibilities that computational methods offer (e.g., several articles in Volkens et al., 2013; see also Grimmer & Stewart, 2013).

New political phenomena also open up for empirical researchers to examine. First, digitalization creates new avenues to speak and act, importantly various social media platforms. These avenues have interested political scientists for some time, such as political campaigns (e.g. Lilleker et al., 2011; Strandberg, 2008) and protests (e.g., Asad & le Dante, 2015; Varnali & Gorgulu, 2013). Another direction for empirical research would be to apply science and technology studies framework. In that area, tools and environments are seen as constructed and the question is why certain choices have been made in the construction process (Gillespie, 2012).

In this workshop, we invite papers that address the question “What should, could, and should not political scientists study given digitalization and by means that include digital methodologies?”.

Each paper should examine a case that illustrates the actual (realized and proven) or potential (possibly and promising) influence of digitalization upon theoretical, methodological or empirical aspects of political science research.Those willing to participate in the workshop are kindly asked to send a 500 word abstract at the maximum to all workshop organizers not later than 18 January 2016. Those whose papers are accepted for presentation should deliver a full manuscript not later than two weeks before the conference, meaning a deadline of 25 February 2016. We prefer English contributions for the inclusion of other than  Finnish-speakers only, but we also accept proposals for papers in Finnish or Swedish.

Today Matti Nelimarkka and Mari Marttila presented their preliminary work on trying to measure how much interest groups affected the Finnish government policy statement (in Finnish hallitusohjelma) during and after the 2015 elections.

Their approach was rather simple: trying to examine textual similarities between the government policy statement and any of the interest group policy statements. In practice, this leads about 15,000,000 comparisons. 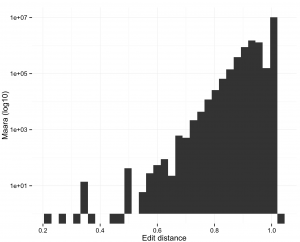 As can be seen from the initial work, there are a lot of documents with no influence (right side) and some documents which had rather large impact. In Matti’s view, the initial impressions on the workshop were surprisingly positive, not only regarding the results but also on the needs of computational politics.

Slides from a presentation at the Digital sociology mini-conference.

We expect big data methods to make rational contributions by means of helping generate research results that are not inferior to those attained in other ways but are possibly better, or hard or impossible to generate in those other ways. Those who apply these methods may also aspire to use them to augment the available arsenal of research methods, offer surrogates for existing research designs, and re-orient research. Moreover, we can critically examine the direct and indirect societal and political effects of the institutionalization of big data methods. To reach its first objective, this article elaborates in its final section conclusions on how big data methods, not only by means of their ‘social life’ but also by their ‘political life’, influence the institutionalization of social research with special reference to political science research. To advance towards its conclusions, the article first pursues a second objective, re-examining a comparative ‘intermediate data’ study of budgetary legislation in thirteen countries to draw conclusions concerning the augmentation of the arsenal of research methods, the surrogation of existing research designs, and the re-orientation of research.