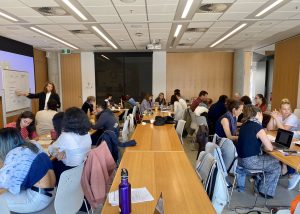 “Hot water floats and hot air rises. That’s all you need to understand how climate change affects the ocean.” A week of discussing climate change adaptation and social equity in marine socio-ecological systems starts with the basics. Guided by researchers with expertise ranging from ecology to philosophy, I had the pleasure to attend the first summer school held by Centre for Marine Socioecology in Hobart, Australia, which brought participants from both natural and social sciences together to learn about interdisciplinary approaches to climate change adaptation.

Socioecological research in the context of the way climate change affects the oceans means that in addition to considering the direct impacts we usually hear about – warming temperatures, sea-level rise, range shifts in marine species –, we would also be considering the interlinked consequences of environmental changes on the society. So instead of looking at the different parts of the puzzle separately, during the course, we would hear how they can be studied together –combining the ‘ecological bits’ with the ‘human bits’.

While the physics of climate change seem more or less straightforward, the rest of the chain is a tougher cookie. Living things are much more complicated to predict than molecules, as organisms tend to be pickier about their environment. Even small changes may tip the system and there are still many uncertainties about which direction the system will tip. Human behavior adds yet another layer of potential consequences of environmental changes (we have limited insights into other species’ socio-ecological systems, so we’ll stick to human systems).

Another thing to consider is that the impacts are not distributed evenly. The temperature shift is not going to be 1.5°C everywhere. Similarly, not everyone has the right to the same quality of protection from the extreme events that we may expect to happen more frequently in the future. Wealthier areas tend to have better resources to prepare for sea-level rise, coastal erosion, and floods. In addition to coastal security, other societal impacts include potential consequences for livelihoods, food production and nutrient supply, and mental health.

In addition to discussing interdisciplinary approaches to socioecological changes, the central activity of the summer school was to develop a collaborative interdisciplinary project proposal in response to a real-world problem identified by representatives from various marine stakeholder groups. Our group had the pleasure of working with WWF Australia on how governance can adapt to rapid environmental changes caused by shifting marine currents.

Marine currents are changing direction, and that change can be abrupt and unexpected. In the marine environment, when temperature changes, everything changes. These fundamental changes in marine ecosystems will also affect those whose livelihoods depend on marine resources, like fisheries. From a management point of view, rapid shifts in the marine environment present challenges due to the uncertainty of both their magnitude and timing. Rapid and unexpected events may result in situations that we are not prepared for, and we may find our decision-making toolkit incomplete. The essential challenge we’re facing is that governance is based on thinking we know the system is going to work in the future, yet rapid shifts in the environment may rock the boat unexpectedly. So how do we make decisions to adapt to abrupt changes?

While scientific knowledge is an important part of the decision-making, you can’t really tell in advance how people are going to react to changes in their livelihoods, or especially how they will feel about them. A seemingly simple change, such as an increase in temperature by 0.3°C, may have a strong cascading effect on fish and through that on aquaculture, creating complex chains of events that are challenging to predict.

To help us focus on potential solutions rather than envisioning all the challenges (there were many!), we were given an example of an unexpected solution to a rapid environmental change from oil spill combating. In 2001, 438 little penguins were affected by an oil spill near Phillip Island in Australia. Many penguins die when they ingest the poisonous oil while trying to clean off their bodies, yet the local NGO’s realized that if the birds are wearing sweaters, they wouldn’t be able to get their mouths on the oil. No one had thought of that before, yet nowadays little sweaters knitted for penguins are an important part oil spill combating in Australia.

This concrete case showed us that being able to visualize the different situations we may find ourselves in, can help us find practical solutions to the challenges we face. Putting this into a larger context, we agreed – after diverse discussions – that one way to prepare for decision-making under unexpected circumstances – a rapid shift in the direction of a marine current, for instance – would be to simulate and imagine multiple situations and to observe what kind of decisions different actors take. This would help us see what we are not prepared for, and to find gaps in our current decision-making system to adapt to rapid changes.

Throughout the week, we saw multiple examples of different methods being used to integrate expertise and engage with different actors and knowledge systems. It became clear that together was the word we’d want to focus on.

As the week drew to an end, we had shaped up a proposal that we were surprisingly happy about, which was all about preparing decision-makers for abrupt changes by working and devising solutions together. We wouldn’t have the tools and skills to execute our plan ourselves, but what we had learned is how incredibly complicated environmental issues may be, and how much further you can get when you get different people with different skills and views around the table. In addition to letting us experience the different stages of interdisciplinary group work within just a few days, the course highlighted that bringing together different disciplines, actors, and knowledge systems is not only beneficial but fundamental to find equitable solutions to the uncertain changes in our environment due to climate change.

This post was inspired by the Centre for Marine Socioecology’s interdisciplinary summer school held in Hobart February 3rd-7th 2020. Presentations from all conveners, guest speakers, and discussions with my group members Florence Briton, Peter Pusic, Kim Baldry and Samuel Tsao were (in addition to being fun and awesome humans) a great source of inspiration for writing this post.

Laura works as a PhD researcher in the Fisheries and Environmental Management Group and is currently visiting the Centre for Marine Socioecology and CSIRO in Hobart as a part of her PhD research.